In an updated document, the many demands for favorable media coverage Prime Minister Benjamin Netanyahu and his family are accused of making are broken down by asker. 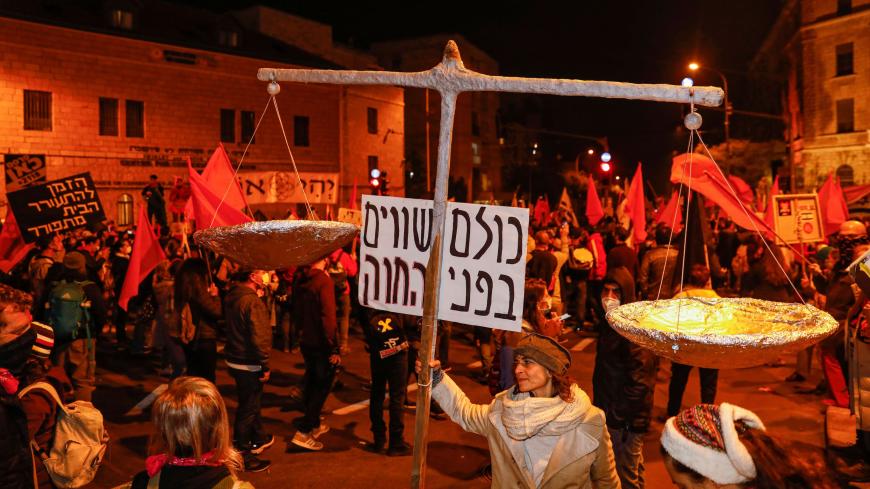 Israeli demonstrators gather for a demonstration against Israeli Prime Minister Benjamin Netanyahu outside his official residence in Jerusalem, calling upon him to resign on Nov. 28, 2020. - AHMAD GHARABLI/AFP via Getty Images

The 71-year-old embattled premier was indicted last year on charges of bribery, fraud and breach of trust. The investigation alleges Netanyahu accepted lavish gifts from wealthy businessmen and offered bribes in exchange for favorable media coverage.

In the most serious of the three cases against him — known as Case 4000 —  Netanyahu is accused of providing regulatory benefits to Bezeq, the country’s largest telecommunications group, in exchange for positive media coverage on its news site Walla.

Netanyahu, who secured a historic fifth term as prime minister in April, denies all wrongdoing and has called the trial a political “witch hunt” orchestrated by his leftist rivals, the media and state prosecutors.

Last month, the Jerusalem District Court asked prosecutors to update their indictment to differentiate between Netanyahu’s alleged requests to Bezeq and those allegedly made by his wife and son.

The state prosecutor's office said Sunday it compiled a total of 230 requests for favorable reporting from Netanyahu, his family members or their representatives. Netanyahu was directly involved in roughly 150 of the demands, the amended indictment says, and he was also aware that his family was making repeated editorial requests to Walla owner Shaul Elovitch.

“The inquiries include demands to improve the media coverage of Netanyahu and his family, to increase the amount of exposure positive news items received or to delete, downplay or change the headlines of negative news items about Netanyahu or his family,” the prosecution said.

Netanyahu’s office defended the requests as “routine actions by spokespeople,” adding that it was “absurd” to label them criminal acts.

“And the height of absurdity — nowhere on earth has an indictment been filed against a public figure because of media coverage. This is what happens when they try in every way to stick a case against a strong right-wing government leader,” Netanyahu said in a statement.

Netanyahu’s trial is scheduled to resume with witnesses next month, and several former close associates plan to testify against him. Netanyahu, whose lawyers have asked the court to dismiss the charges, is the country’s first sitting prime minister to be tried in court.