Local and international artists and environmental activists created an exhibition of art made primarily of discarded placards from Jordan’s parliamentary elections last year to address political apathy and the growing environmental crisis facing the kingdom. 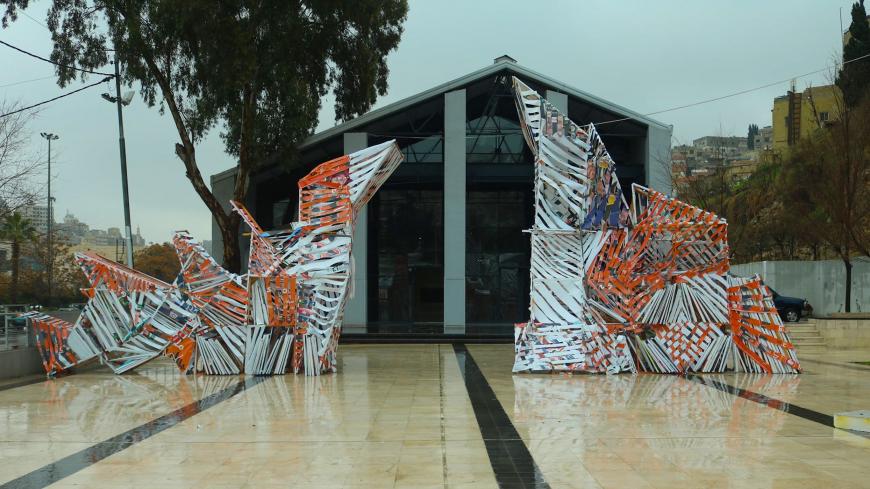 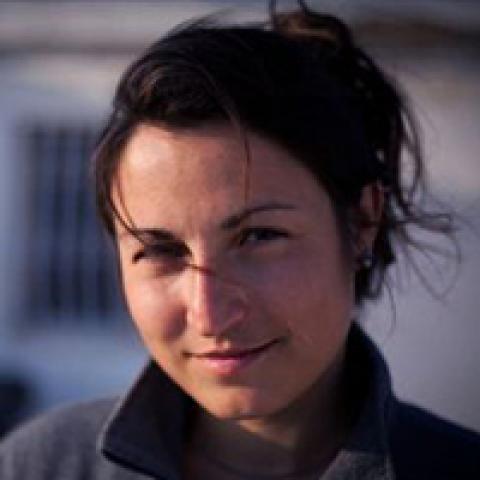 Shreds of plastic and garlands of waste adorn the walls of “We will All Perish and Plastic is Forever” — an immersive art installation created by US-born Iraqi artist Maria Nissan — at Amman’s newly opened Recycle Art Festival.

“I wanted to recreate the experience that you have when you are swimming in Aqaba, and you are surrounded by trash everywhere,” Nissan told Al-Monitor. A self-described “artivist,” Nissan transforms trash into art “to challenge our consumerist behaviors and their environmental consequences.”

Nissan is among over 60 international artists taking part in the exhibition, which opened on Jan. 20. All the art is created entirely out of discarded political placards from the Jordanian parliamentary election, held on Nov. 10, 2020. The placards were printed on flex, a heavy plastic material that is neither biodegradable nor recycled locally.

At the heart of the event are two women, Hayat Hindiyeh and Khuzamah Abu Joudeh. An artist herself, Abu Joudeh was a co-founder one of the parties that ran in the elections. Seeing the huge quantity of materials used for the campaign, Abu Joudeh felt compelled to initiate a collective artistic response.

“We wanted to encourage people to think differently for upcoming elections. There are other ways to campaign than through these placards that are harmful to the environment,” Abu Joudeh told Al-Monitor.

Jordan faces a growing environmental pollution crisis with approximately three million tons of waste generated each year, of which less than 10% is recycled. Plastic litter is omnipresent in Jordan’s beautiful landscapes, reaching the most remote corners of the desert.

“Jordan has an enormous potential to develop sustainable waste management practices and infrastructures, because the needs are tremendous,” said Nissan. The posters would normally end up in one of Jordan’s many formal and informal dump sites, the immense majority of which are not engineered to keep soil and water contamination from entering waste leachates.

Gathering artists of several nationalities, the exhibition is a response to a situation that is in reality international. Jordan’s waste crisis has been exacerbated by waves of displacement linked to regional crises, which added strain to existing infrastructure. In parallel, regional waste value chains have been impacted, including through the interruption of glass exports to Syria for recycling.

Prior to the exhibition, established and emerging artists worked together during a long-month workshop series. This creative exchange led to an exceptional plurality of works despite the use of a common medium. “Absolutely everything in the exhibition is made of recycled materials,” Abu Joudeh highlighted, “including the clothes rack and the plaques describing each piece.”

Despite her enthusiasm, Abu Joudeh described an “exhausting” and challenging experience and a struggle to find funding. Only one private donor committed financial support, and the rest was provided by the organizers’ private funding sources. The artists were not remunerated.

The Greater Amman Municipality supported the project by providing access to its exhibition space in downtown Amman, the Hangar. “We were immediately interested by the project because the municipality has a waste-sorting project and turning this waste into art has been on our mind for a long time,” Shima al-Tal, cultural department manager at the Greater Amman Municipality, told Al-Monitor.

The exhibition, which is free to visit, is designed to be accessible to a wide audience, but it remains to be seen whether its message will spread beyond the narrow circle of cultural elites. Engaging the youth and children through art will be challenging as always, but critical.

“Youth are not only those who will be affected by today’s decisions, but also the ones who can more easily open their mind to alternatives and responsible behaviors,” said Nissan, whose immersive installation is meant to be “experienced and not just seen” and thus engaging for young people. Abu Joudeh also hopes to replicate the event's art workshops in schools, bringing the artists and children together.

All around the exhibition, the faces of candidates peek through the paint as reminders of the canvasses’ past. Working with discarded electoral placards is a way to tackle interrelated environmental and political concerns.

“This type of trash holds the politicians accountable for the waste they have displayed in the city they are supposedly fighting for,” said Nissan. “It sheds light on unsustainable and highly deficient political habits when cost-effective and greener alternatives exist.”

At the entrance of the Hangar, two giant birds stand guard, built of wood and flex by Kamal Abu Halaweh, a Jordanian artist and social activist who also ran in the parliamentary elections. He says the birds symbolize the conflictual dynamics of the electoral process, inspired by an Arabic saying likening people in conflict to two fighting turkeys.

“The elections are mainly about influence and tribalism,” Abu Halaweh told Al-Monitor, saying the process was cathartic. “I responded to the empty words of politicians through artistic action.”

Likewise, Abu Joudeh regrets the relative lack of discussion about environmental issues during the electoral campaign, an absence made glaring by the quantities of waste upcycled at the exhibition.

Despite relatively low political interest at the national level, several environmental initiatives are picking speed in Jordan. On Jan. 25, the minister of environment visited the exhibition — a welcome sign. Speaking to Al-Monitor, al-Tal also stressed the municipality's support for the initiative, which it considers a pilot for further projects.

“This is a project that we can renew after each election,” said Tal, mentioning the municipal elections due to take place this year. The topic will surely be a crucial battlefield for the vote, as waste management is a major issue for municipalities.