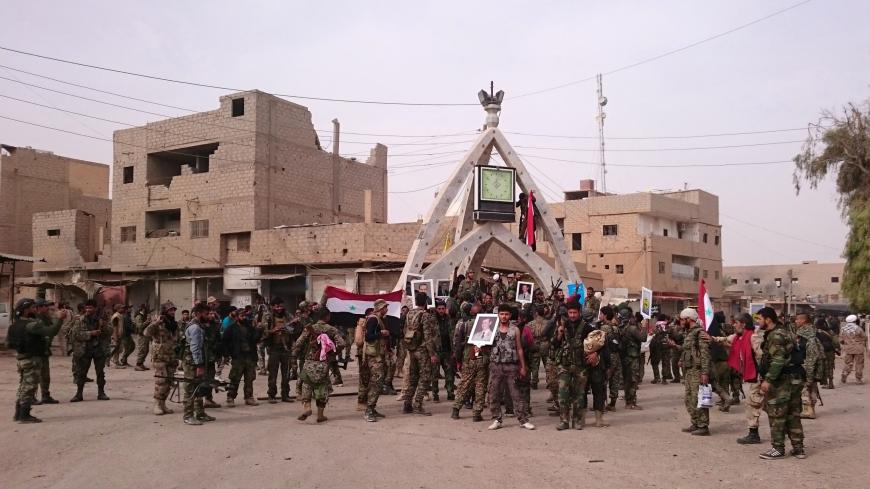 Members of the pro-Syrian government forces pose with portraits of Syrian President Bashar al-Assad and his late father, Hafez al-Assad, as they gather in a public square in the Syrian border town of Abu Kamal, on Nov. 20, 2017, after the ouster of the Islamic States. Abu Kamal is one of three cities hit by suspected Israeli airstrikes this week. - STRINGER/AFP via Getty Images

A deputy commander of the Quds Force of Iran’s Islamic Revolutionary Guard Corps (IRGC) denied that any deaths had resulted from a string of airstrikes believed to have been carried out by Israel in Syria earlier this week.

“The attacks left no human casualties,” Ahmad Karimkhani told Iran’s state Fars News Agency on Thursday. “Despite their fake propaganda, the Zionists do not dare to attack the Iranian and resistance groups’ centers and positions in Syria,” he added.

Reports of deaths varied. Omar Abu Layla, who runs an activist network in Deir Ez-Zor, told reporters that no more than 40 had been killed. The United Kingdom-based Syrian Observatory for Human Rights said 57 had been killed, including more than a dozen Syrian army personnel. Most killed were from Iran-backed Shiite militias, the observatory reported.

A commander of the IRGC-backed Afghan Fatemiyoun in Syria denied Thursday that any of his militia’s members had been affected, but said Syrian army personnel were killed in the strikes.

The Syrian Observatory for Human Rights said Thursday that the strikes caused the Fatemiyoun to redeploy personnel in the three Euphrates River valley cities to avoid potential follow-up strikes.

The strikes targeted warehouses used to store Iranian weapons systems in Syria, a US intelligence official told The Associated Press on Wednesday. The official also said the sites stored materials needed for Iran’s nuclear development, though it was unclear what.

The United States has sought to strangle Iran’s financial ability to support proxy militias abroad in conflict zones in Syria, Iraq and Yemen, and has clamped down on Iran’s ability to obtain certain metals that could be used to manufacture ballistic missiles.