Iran says sanctions imposed by former President Donald Trump are preventing the country from securing the COVID-19 vaccines it needs. 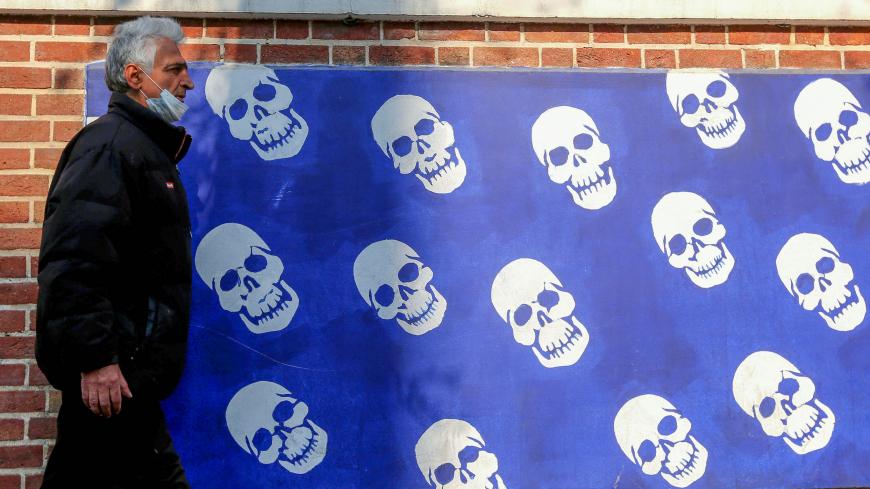 An Iranian man wearing a protective mask amid the COVID-19 pandemic walks past a mural painted on the outer walls of the former US Embassy in the capital Tehran, on Dec. 30, 2020. - ATTA KENARE/AFP via Getty Images

Iran is calling on President Joe Biden to remove harsh sanctions levied by the previous administration that Iran’s leaders say are impeding their access to coronavirus vaccinations made abroad.

“Since [Biden’s] administration claims not to be anti-science like the previous one, … one expects it to free the transfer of Iran’s own foreign exchange resources to fight the coronavirus and for health and food, and lift banking sanctions quickly,” government spokesman Ali Rabiei said at a televised news conference on Tuesday.

After unilaterally withdrawing from the nuclear deal in 2018, former President Donald Trump imposed crippling economic sanctions on Iran that had been eased under the pact negotiated between Tehran and world powers. The Treasury Department issued exemptions for the delivery of medicine, food and humanitarian supplies, but Iran says the sanctions have scared off foreign banks and companies involved in the distribution and production of vaccines.

Iran is still fighting the Middle East’s worst COVID-19 outbreak, with more than 1.37 million infected and over 57,000 dead from the virus, according to official figures. Despite the massive caseload, Supreme Leader Ayatollah Ali Khamenei banned the import of vaccines made in the United States or United Kingdom earlier this month, saying he had “no confidence in them.”

Iranian officials say they are in talks to import vaccines from “reliable countries” and on Tuesday, Foreign Minister Mohammad Javad Zarif said Iran plans to import and produce the Russian-made Sputnik V vaccine. Iran has also secured doses through the World Health Organization’s COVAX initiative, and according to Deputy Health Minister Qassem Janbabaei is considering buying doses from AstraZeneca.

Biden has pledged to lift some sanctions and rejoin the nuclear agreement if Iran returns to strict compliance under the deal, known as the Joint Comprehensive Plan of Action (JCPOA). But salvaging the 2015 agreement will take time, officials say.

Antony Blinken, Biden’s nominee for secretary of state, said it was “vitally important” that the administration first consult with Congress, Israel and Gulf allies. Director of National Intelligence Avril Haines said during her confirmation hearing last week that "we are a long ways" from Iran meeting its commitments.

Tehran has steadily enriched its uranium stockpile beyond what’s allowed under the multilateral deal. In another violation this month, Iran said it would resume production of uranium metal, a fuel used in nuclear reactors.