Iranian officials have argued US sanctions have hampered their ability to make payments for overseas vaccines. 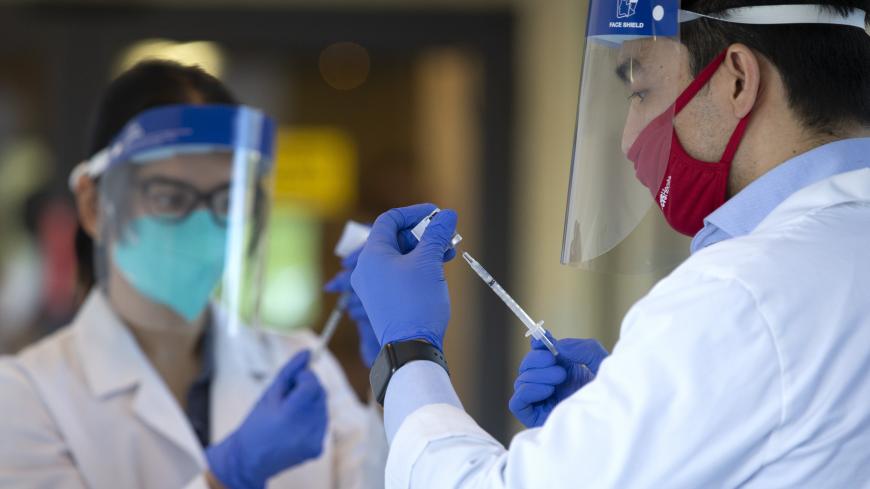 Pharmacists prepare doses of the COVID-19 vaccine at the Life Care Center of Kirkland on Dec. 28, 2020 in Kirkland, Washington. - Karen Ducey/Getty Images

The United States has approved the overseas transfer of funds from an Iranian bank to pay for coronavirus vaccines, the regime’s central bank chief says. Sanctions are technically not supposed to affect medicine, and this will allow Tehran to avoid some of the corollary damage US restrictions on Iran's financial institutions have caused when it comes to the Islamic Republic's medical sector.

Central Bank Governor Abdolnaser Hemmati told state TV last week that the approval follows the “pressure of world public opinion” and comes as the country’s daily death toll from the virus fell to a three-month low.

Washington has repeatedly said that medicines and medical equipment are not under sanctions. But Iranian officials have argued the sanctions have hampered them from making payments for vaccines coming from overseas as international banks and financial institutions fear being fined or locked out of American markets.

The US Treasury’s Office of Foreign Assets Control granted approval for an Iranian bank to transfer funds to a Swiss bank, Hemmati said. The office could not be reached for comment.

Hemmati said Iran can now pay for 16.8 million vaccine doses from COVAX, a World Health Organization-led partnership that aims to deliver coronavirus vaccines to the world’s poorest countries. The import totals about $245 million.

Iranian Health Ministry spokesperson Sima Sadat Lari told state TV on Thursday that 152 people had died from the virus in the previous 24 hours, the lowest number since Sept. 18. The overall death toll in Iran, the country most affected by the virus in the region, stood at 54,814 Monday, with the daily death toll listed as 121.

The regime has seen a significant drop in its daily number of coronavirus deaths after a month of traffic curfews and other major city restrictions. Police on Wednesday said they issued 96,000 fines nationwide against drivers breaking the late-night driving restriction. Despite progress, though, health officials have continued to urge caution and cite a looming resurgence.

If the funds are successfully transferred, the COVAX doses will cover about 8 million individuals, less than 10% of Iran’s population. Iran will also import some 150,000 doses of the Pfizer vaccine, according to the head of Iran's Red Crescent Society, Karim Hemmati, although no timeline on distribution was given.

“We do not recommend injecting foreign coronavirus vaccines to the personnel of the Revolutionary Guards and the Basij (voluntary militia),” the deputy head of the Islamic Revolutionary Guard Corps Basij forces, Mohammed Reza Naqdi, told Iranian news outlets, as reported by Reuters.

Mostafa Ghanei, an Iranian official on the country’s COVID-19 task force, said the domestic vaccine would likely be available by early summer. However, Iranian medical experts say about two-thirds of the population must be vaccinated within a short-term period for an effective curb of the pandemic.

US President Donald Trump withdrew from the Iran nuclear deal in 2018 and launched a “maximum pressure” campaign against Tehran that has hit the regime with a string of sanctions, many targeting their financial sector.

But incoming US President Joe Biden, elected last month, has hinted that Washington could rejoin the deal and lift some of those restrictions.