Iran’s foreign minister says it is willing to reposition an Iran-led Afghan militia in Syria to fight Islamic State forces in Afghanistan. 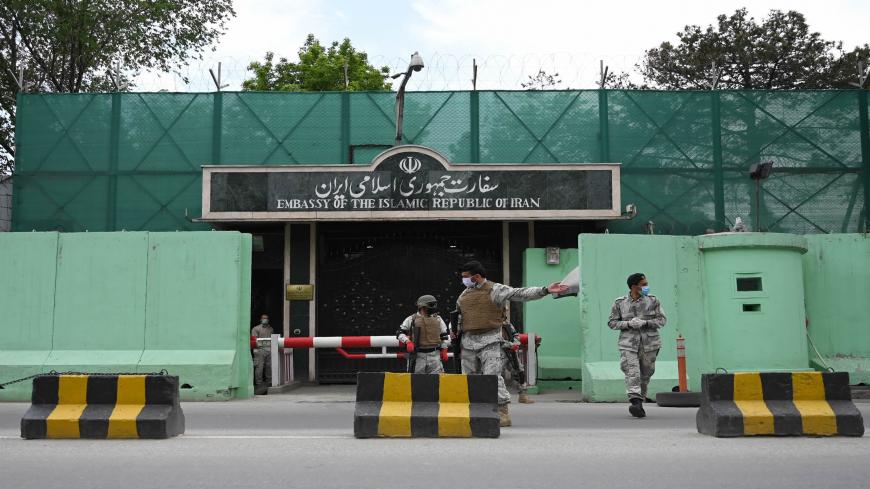 Afghan security personnel stand guard in front of the Iranian Embassy as civil society activists hold banners and shout slogans against the Iranian government during a protest, Kabul, Afghanistan, May 11, 2020. - Wakil Kohsar/AFP via Getty Images) 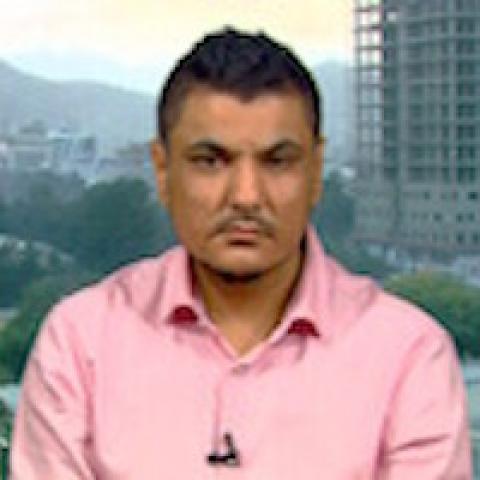 KABUL, Afghanistan — The Fatemiyoun Brigade, a militia of Afghan refugees created by Iran to fight in Syria, held a public symposium in the Iranian city of Mashhad in August 2020. According to online promotional material, the conference was held to highlight the group’s “ultimate aim” to “expel US forces from the region.”

To policymakers and analysts in neighboring Afghanistan, the statement hit far too close to home. The country, which shares a 936-kilometer (582-mile) border with Iran, has been the theater of Washington’s longest-ever foreign incursion.

Then, on Dec. 21, Iran’s Foreign Minister Mohammad Javad Zarif appeared on Afghan television and put forth a disquieting offer to the Afghan government. “The Afghan government, if willing, can regroup [the Fatemiyoun]. … For the fight against Daesh and for the fight against terrorism and for the protection of Afghanistan security,” Zarif told TOLOnews, using the Arabic acronym for the Islamic State (IS).

The offer came after Zarif said the Afghans were in Syria “voluntarily” and that the force numbered no more than 5,000 fighters. Both claims have been heavily reputed by Afghan politicians, families of former fighters and rights groups.

Watching the interview, Abdul Sattar Hussaini, a member of parliament from the western province of Farah, which shares a porous border with Iran, felt both angered and vilified.

“Why are you trying to return our own people back to us. Who are you to return Afghans to Afghanistan?” Hussaini said in response to Zarif’s offer, which he noted further proves Tehran’s yearslong interference in Afghan matters.

In response to Zarif’s comments, the Afghan Foreign Ministry said in a statement, “The Constitution, national interests, and foreign policy of Afghanistan do not permit that Afghan citizens, expect from being under the national flag, enter regional wars and conflicts in different countries.”

Hussaini and others speaking to Al-Monitor said Kabul’s response was lacking when it came to denouncing the Iranian claims. He pointed to an official visit by Afghanistan's national security adviser Hamdullah Mohib to Iran in the days following Zarif’s statements as proof that the Afghan government did not go far enough.

Beyond his resentment at the audacity of the statement, Hussaini sees the proposal as clear evidence of what he has been saying for years, based on both his 13 years working in border security in the western zone and his time in the parliament — that Iran is actively supporting armed groups, including the Taliban, in Afghanistan.

Hussaini said that Iranian spies have been arrested along the western zone of Afghanistan. “One of them was caught after photographing each of our airports,” he said.

But he noted that Tehran’s efforts in Afghanistan go beyond simple espionage. He said that at least 30%-40% of the Taliban’s armaments come from the neighboring Islamic Republic. Hussaini’s statement falls in line with years of reports from residents and officials in the provinces of Herat, Farah, Ghazni, Helmand and Kandahar that Tehran is aiding and abetting the Taliban.

Hussaini said he has clear evidence that “the orders for the Taliban to fight in Farah came straight from the Islamic Revolutionary Guard Corps.”

He added that Iranian fighters have stood side by side with Taliban forces across Afghanistan’s western and southern zones, noting, “They dress like us, talk like us and try very hard to blend in.”

Hussaini said these Iranians operate in a very systematized manner and possess pictures, maps and GPS details of Afghanistan.

Abdul Qayyum Rahimi, who served as governor of Herat, home to Afghanistan’s largest border with Iran, in 2019-20, agrees with Hussaini’s assertions. He told Al-Monitor that though Zarif claimed Iranians “just like officials of other countries met the Taliban delegation either in Doha or in their respective capitals,” as part of the US-initiated peace talks, Tehran’s connections to the Taliban started well before 2018.

He added, “Their interactions did not start yesterday; it was long before the peace talks.”

Hussaini said that Tehran’s interference in Afghan affairs date back to the Soviet occupation of the 1980s. “This was long before the United States entered Afghanistan and will continue long after,” he added.

Despite Zarif’s disavowal of such statements, both Hussaini and Rahimi said there is clear evidence that Taliban officials are residing in various parts of Iran and that their fighters have been treated in Iranian health facilities.

Rahimi, Hussaini and other sources Al-Monitor spoke to all said the Afghan people don’t look highly upon foreign-trained militias, including the Fatemiyoun.

Rahimi said if the Fatemiyoun were ever to shift from fighting so-called IS forces in Syria to Afghanistan, it could only create more tensions in the country. “It’s a huge risk. It could lead to sectarian, tribal and ethnic disputes in our own country,” he noted.

But the complications surrounding the Fatemiyoun in Afghanistan have already led to difficulties within the country. Last February, a new article in the Afghan penal code set out to prosecute “a person who participates in wars or internal armed conflicts of other countries” with a prison sentence of up to seven years. One 23-year-old from Sar-e Pol province has already been detained for at least a year under the law.

This of course raises questions of how Kabul can prosecute its own citizens for committing crimes sources say were prompted by poverty and well-documented ill-treatment in a neighboring country.

Ultimately, Zarif’s comments, along with the reports of Iran’s role in assembling the Fatemiyoun and their alleged assistance to the Taliban point to a clear fact, according to Hussaini. "Afghanistan has no worse enemy on this Earth than Iran,” he concluded.