The emirate is also pausing live entertainment at hotels and restaurants until further notice. 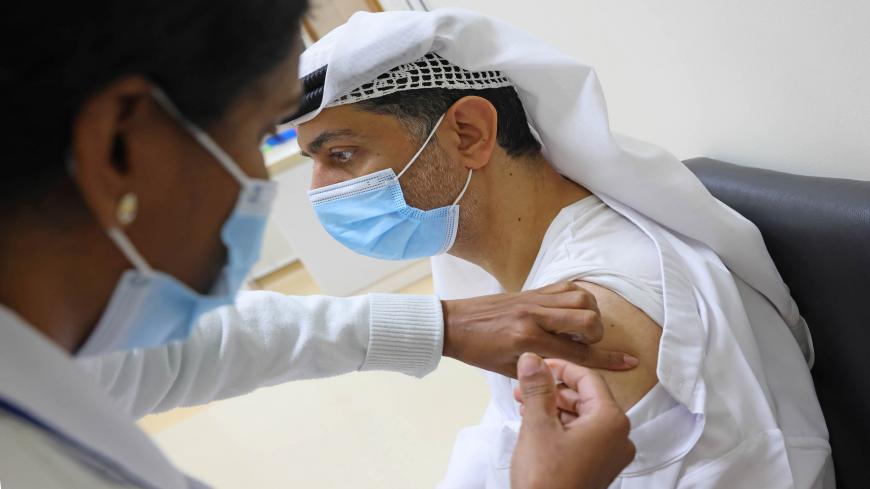 An Emirati man gets vaccinated against the coronavirus at Al-Barsha Health Center in the Gulf Emirate of Dubai, Dec. 24, 2020. - Giuseppe Cacace/AFP via Getty Images

Dubai has put a hold on all nonessential surgeries and suspended live entertainment at hotels and restaurants amid a worsening coronavirus outbreak in the United Arab Emirates’ (UAE) tourism capital.

During the last three weeks, Dubai’s Department of Tourism and Commerce Marketing closed down more than 20 establishments and issued more than 200 warnings to hotels and restaurants that weren’t complying with virus restrictions, the agency said on Twitter. The newly announced restrictions on entertainment activities, which begin Thursday, will last until further notice “to ensure public health and safety.”

Elective surgeries are also now on hold until Feb. 2, with the possibility of an extension. The decision to pause them, the Dubai health regulator said, is “in line with ongoing efforts to safe public health and manage the cases of COVID-19 virus and based on the current need of ensuring the preparedness of health facilities to provide the required health care.” Exceptions will be made at the sole discretion and assessment of the treating physician, the circular said.

The Emirati Health Ministry announced a record 3,529 new cases on Thursday, raising the total number during the pandemic to 267,258. The Gulf country has recorded 766 deaths from the virus — a relatively low death rate explained in part by the UAE’s young population.

Hoping to keep tourism dollars flowing, the UAE has held off imposing another lockdown despite the rise in cases. The Gulf country’s hotels, commercial shopping centers, amusement parks and beaches have largely remained open to tourists, but mask usage and social distancing are enforced.

UAE flag carrier Emirates, which earlier this year reported more than $3 billion in pandemic-related losses, resumed service at about three-quarters of its pre-pandemic levels. The recent surge in infections prompted the United Kingdom to take the UAE off its “safe travel corridor” list.

The new restrictions come as the UAE embarks on an ambitious campaign to vaccinate half its population of under 10 million people by the end of March. The country’s vaccination rate is among the highest in the world, with health authorities having administered the Chinese-made Sinopharm vaccine to more than 1.8 million people free of charge.

“We hope that with vaccinations picking up pace, we will reach the point of full recovery in the shortest possible time," Abu Dhabi Crown Prince Mohammed bin Zayed Al Nahyan said. "That is the hope we all share and must strive for."