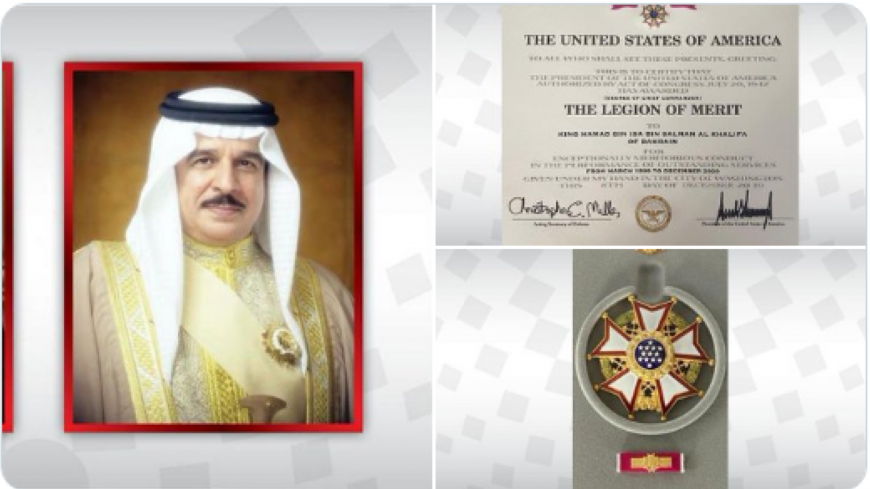 A screenshot shows a tweet the US Embassy in Manama posted on Jan. 19, 2021, congratulating Bahrain's king for receiving the Legion of Merit from US President Donald Trump. - Twitter/US Embassy Manama

US President Donald Trump on his final full day in office bestowed a prestigious award on Bahrain's leader.

King Hamad bin Isa Al Khalifa received the Legion of Merit, Degree Chief Commander on Tuesday, according to the state-run Bahrain News Agency and the US Embassy Manama.

The Legion of Merit, Degree Chief Commander is a rare award given out by the US president to other heads of state. In presenting the award, Trump praised Khalifa for Bahrain’s establishment of relations with Israel and its hosting of the US Navy's 5th Fleet, the agency reported.

Bahrain has also hosted a US Navy presence for half a century.

Bahrain agreed to normalize ties with Israel in September in a deal brokered by the Trump administration.

The Legion of Merit, Degree Chief Commander is historically a rare award, although in September, Trump bestowed the award to Emir of Kuwait Sheikh Sabah al-Ahmed al-Jaber al-Sabah just before he died. Before that, it was previously awarded in 1991.

Trump, who will leave office Wednesday, was supportive of Bahrain and its allies in the Gulf during his presidency. Bahrain supported the president's efforts to restrict weapons acquisitions by Iran, for example.