Despite attempt at makeover, Syria’s HTS remains on US terror list

Hayat Tahrir al-Sham has been trying to present itself as a moderate group seeking to have its name removed from the international terrorist list, but these attempts are failing after the United States recently designated it among the "Entities of Particular Concern." 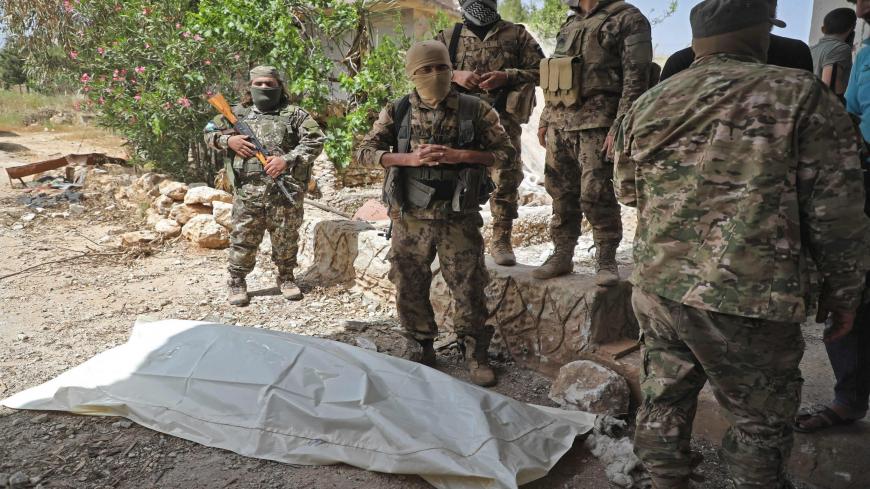 Fighters from Hayat Tahrir al-Sham stand over the body of a Syrian regime soldier before the start of a reported prisoner swap deal in the town of Darret Ezza, about 30 kilometers (19 miles) northwest of Aleppo, Syria, May 16, 2020. - Aaref Watad/AFP via Getty Images

IDLIB, Syria — In a Dec. 7 report on international religious freedoms, the United States designated Hayat Tahrir al-Sham (HTS) as being among “Entities of Particular Concern” over its abuses of human rights.

In 2018, HTS was designated by the United States as a terrorist organization with the UN Security Council including it as a sanctioned entity linked to the Islamic State, al‑Qaeda, and associated individuals and groups.

This new US designation shattered HTS’ hopes of having its name removed from the international terrorist lists, despite all the steps that it had taken to improve its image on the international level. The US decision comes a few days after the US State Department’s announcement of offering a financial reward of up to $10 million for information related to HTS leader Abu Mohammed al-Golani.

The US Department of State’s Reward for Justice Program said in a Nov. 24 tweet that the State Department is looking for information about Golani’s whereabouts.

In this context, HTS's media relations manager Taqi al-Din Omar gave Al-Monitor a statement, which was distributed to other media outlets. He said HTS is not concerned about its designation as a terrorist group, as this is a purely political classification and is not based on any facts or data.

“We do not consider ourselves classified [as a terrorist group], because we are in an open war with a criminal dictator regime that has committed horrific massacres and displaced three-quarters of the Syrian people, who became refugees outside [their country] or were displaced to camps in border areas. [This has been happening] in full view of the world. [The regime] killed over a million Syrians during the war and brought in the Russian and Iranian occupiers to abort the popular revolution in Syria,” Omar said.

He added, “We have all the legitimacy to confront this brutal occupation by standing on the battlefronts to protect the 4.5 million civilians in the northwest area of Syria. This is a guaranteed right and the responsibility of every free person to defend himself, his country and his religion.”

Al-Monitor met with a former jihadist leader who preferred to be identified with the pseudonym Abu Dhar al-Shami for security reasons.

“HTS’ approach has apparently changed in terms of its external and internal discourse, suggesting that it wanted to deliver a message to the West. It seems that the United States received HTS’ messages that it is seeking to remove its name from the list of terrorist organizations, and indirect messages that it wants to improve its image,” Shami said.

He noted, “This means that the United States [has received the message] and may have implicitly mentioned a list of conditions [in order to have its name removed from the terrorist lists], which were rejected by HTS. This [might have] prompted the United States to increase pressure by announcing a $10 million reward for information on HTS’ leader."

Shami continued, “Said conditions are difficult to define as they are part of the US State Department’s secret strategy. But one condition could be that HTS has to dissolve itself and have its members — whether leaders or recruits — form a new entity that the US-led coalition could support and work with. I believe that HTS showed some flexibility to this effect, but did not reassure the US administration so it can still have room for maneuver. This pushed the United States to increase pressure to prompt HTS to take the next step down this road. These are just speculations that I consider close to reality.”

He said, “The classification in itself is not a military objective as much as it is a political goal to exploit this issue in international negotiations and diplomacy. This needs a long explanation, but at the end of the day the future of Syria depends on whatever the outcome. On the ground this designation serves one purpose that is an excuse used on some occasions for international interests and nothing more. But it also has a negative impact on the revolution as it unnecessarily restricts it.”

On Turkey and its role in the area, Shami said HTS is not interested in Turkey’s classification of it as a terrorist group, nor in the Turkish issue in general, as HTS is mainly focused on the United States. This is particularly true despite the fact that reality and logic indicate that getting in Turkey’s good graces is more important than coaxing other parties, according to Shami.

Regarding the repercussions of this classification, Shami said, “Even if HTS was removed from the list of terrorist organizations, this does not mean a change in the military or political situation of the Syrian revolution. Yet striking off its name remains a significant and positive step, as this pretext would no longer be valid and used against the Syrian people’s aspirations of revolting against the [Bashar] al-Assad regime.”

Firas Fahham, a Turkey-based researcher on jihadist groups, told Al-Monitor, “Many of HTS’ movements carry messages to [the international community], confirming the group’s new approach and efforts to have its name removed from the terrorist lists.”

He said, “HTS’ security campaigns against al-Qaeda-affiliated Hurras al-Din [Guardians of Religion] comes within this context. But removing its name remains far-fetched with the current leadership in place. These leaders have specific backgrounds that contributed to classifying the group as a terrorist group. The steps required from HTS — which may prompt international stakeholders such as the United States and Turkey to reevaluate its status — include restructuring the organization and a new leadership that does not have previous connections to ‘globalized jihad’ — i.e., al-Qaeda — but that rather belongs to the Syrian community and the revolution only.”

Fahham added, “The [upcoming Joe] Biden administration’s strategy is not clear regarding Syria and Idlib in particular, as it may focus on northeastern Syria only — i.e., the Kurdish areas. Therefore it is too early to predict the administration’s step toward HTS.”

He concluded, “I believe there are no relations between Turkey and HTS, but Ankara is dealing with it as a fait accompli, and attaches importance to the possible invasion of Idlib by Russia and the Syrian regime. It also seems that Turkey sought to avoid Russia’s request to clash with HTS. I don’t believe that Turkey wishes HTS to maintain the same status. In any case, removing its name from the list of terrorist organizations would be important in weakening Russia’s pretext that it has always used to wage a war against the Syrian people who revolted against the Assad regime."