After Foreign Minister Mevlut Cavusoglu claimed that Ankara and the Washington were setting up a working group on US sanctions on Turkey, a State Department spokesperson denied the existence of any such body. 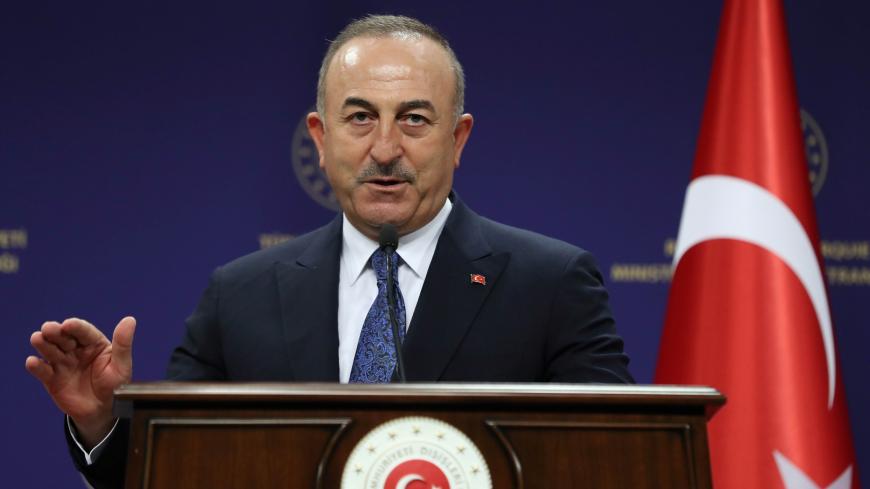 Turkish Foreign Minister Mevlut Cavusoglu gives a press conference with his Hungarian counterpart following their meeting in Ankara on Dec. 8, 2020.

Turkish Foreign Minister Mevlut Cavusoglu announced Wednesday that the United States had offered to set up what he described as a joint working group on US sanctions on Turkey over its acquisition of a Russian-made missile battery system, the state-run Anadolu news agency reported.

Speaking a day after his meeting with Russian Foreign Minister Sergey Lavrov in Sochi, Cavusoglu said the initial proposal had come from Ankara. “Now the proposal came from the United States. As we naturally favor dialogue, we said yes, and negotiations began at the level of experts,” he said, according to Anadolu. Cavusoglu did not specify when the group first met, nor who was participating in it.

A State Department spokesperson, however, denied the existence of any new working group, telling Al-Monitor in reference to the Countering America’s Adversaries Through Sanctions Act, “We understand that the Turkish Ministry of Foreign Affairs has clarified the minister's remarks. There is no working group regarding CAATSA sanctions or to ‘study’ the threat posed by the S-400 system to the F-35. There are routine working-level consultations regarding the impact of the sanctions on existing military-to-military cooperation.”

The spokesperson poured more cold water by saying, “We remain committed to the full implementation of sanctions as announced by Secretary [of State Mike] Pompeo.”

The Turkish Foreign Ministry did clarify its boss’ remarks in a Whatsapp group with journalists, saying Cavusoglu had not said that a new working group for the S-400s had been set up with the United States but rather that “technical talks” are continuing during a year end evaluation of Turkey's foreign policy. The ministry appeared to be debunking Anadolu, saying Cavusoglu's remarks were made during a closed session.

On Dec. 14, the administration of President Donald Trump sanctioned Turkey’s state defense procurement agency, known as the SSB, for “knowingly engaging in a significant transaction” with Russia’s main arms export entity under CAATSA.

Turkey has already been removed from the F-35 consortium and the transfer of the 5th generation fighter jets to Turkey has likewise been blocked. Congress has also frozen structural upgrades to Turkey’s F-16 jets and export licenses for engines that Turkey needs to complete the sale of attack helicopters to Pakistan, as first reported by the industry publication Defense News. The freeze on export licenses that the SSB is involved in was formalized in the CAATSA sanctions.

Turkey has long lobbied Washington for a working group that could address the United States’ concerns about the security risks posed by the Russian S-400s to NATO aircraft. But the United States has refused, saying Turkey had to cancel the contract. It didn’t. The batteries have arrived, though they have not yet been activated.

The 2021 National Defense Authorization Act reiterates that Turkey must give up the S-400s, scotch a second regiment and desist from purchasing further Russian kit.

Aaron Stein, director of research at the Philadelphia think tank Foreign Policy Research Institute, contended in a recent research note, “The American intent was not to crater the Turkish defense industry. Instead, the goal is to deter other potential purchasers of Russian equipment and create a pathway for these sanctions to be lifted.”

“If Turkey is serious about having sanctions lifted then it will have to prove that it isn’t deploying the system,” Stein added.

In a joint news conference with Lavrov, Cavusoglu said US sanctions against Turkey were “an act of aggression against our sovereign rights” and that Turkey would “never yield to pressure.”

Lavrov struck a similarly defiant note. “Relations between Russia and Turkey are self-sustainable and self-sufficient; they don’t depend on someone’s aggressive and hostile whims,” the Russian diplomat said.

For all its tough talk, Turkey is growing nervous over life under the incoming Joe Biden administration. The latter is unlikely to shield autocratic President Recep Tayyip Erdogan with the same kind of enthusiasm Trump has, particularly with respect to the Turkish state lender Halkbank’s illicit gold trade with Iran.

In a bid to win back favor in Washington, Turkey has resorted to sending what it sees as positive signals to Israel. But they have had the opposite effect, with Israeli officials fuming over Ankara’s selection of an overtly anti-Israel think tanker as ambassador to Tel Aviv. His nomination has since been shelved.

Israel and Turkey have not had ambassadors in their respective capitals since May 2018, when Ankara asked the last Israeli ambassador to “go on leave” because of rising violence against Palestinians in Gaza.

Turkey has also named a new ambassador to Washington. Murat Mercan, who is currently ambassador to Tokyo, is a founding member of Erdogan’s Justice and Development Party and will be Ankara’s first ever political appointee to the United States.

He will have his work cut out for him. “Firstly, the attitude of the European Union and the West more generally have really hardened toward Turkey, not simply because of human rights abuses but because of really tangible conflicts that simply won't go away,” said Howard Eissenstat, an associate professor at St. Lawrence University. He was alluding to the S-400s and Turkey’s tangles with EU members Greece and Cyprus in the Eastern Mediterranean.

While the European Union and United States “are both anxious for signs that Erdogan is going to ‘moderate,’ symbolic gestures aren't going to be enough this time around and I don't see Turkey as likely to make the real shifts that its Western allies are hoping for,” Eissenstat concluded.

Stein concurred: “Turkey’s selection of the S-400 is ultimately tied to the whims of Erdogan, who has sought to pursue a neutral foreign policy that disentangles Ankara from its close ties with the West. This foreign policy is, ultimately, premised on transactionalism and a now-pervasive notion that the West must accept Turkish maximalist claims — otherwise, it will be left to grapple with a recalcitrant and hostile Turkish response.”

Update: Dec. 30, 2020. This article has been updated since its initial publication.