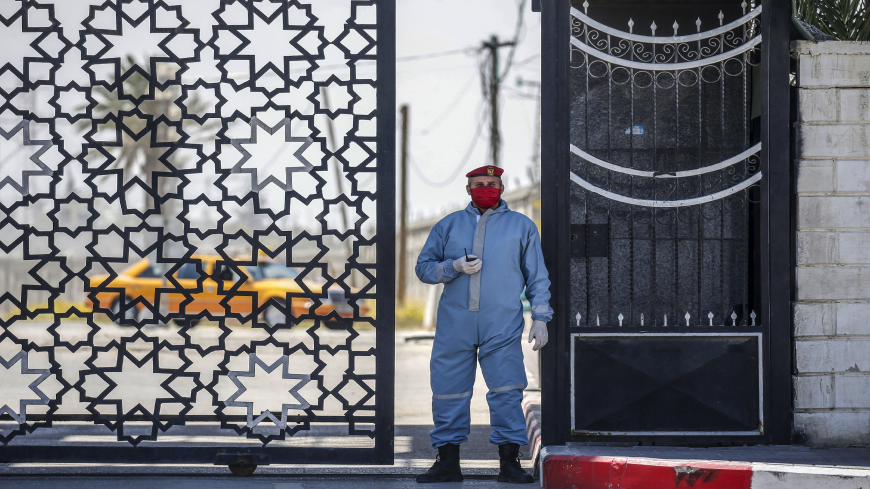 A member of the security forces loyal to Gaza's Islamist rulers Hamas, wearing personal protective equipment as a precaution against the coronavirus (COVID-19) pandemic, waits at the Rafah border crossing with Egypt, in the southern Gaza Strip on April 13, 2020, to inspect any travelers crossing into the Palestinian enclave. - SAID KHATIB/AFP via Getty Images

“The most vulnerable Palestinians must be supported, whether they are in Gaza, Jerusalem, Area C or elsewhere,” said Shtayyeh in a statement. “This plan will allow us to link immediate humanitarian aid with sustainable development endeavors and efforts to overcome impediments over the long-term.”

The Humanitarian Response Plan (HRP) was announced virtually on Tuesday by Shtayyeh alongside representatives from the UN Office of the Coordination of Humanitarian Affairs (OCHA). The arrangement includes support from 213 organizations and 186 humanitarian projects.

Nearly 2.5 million Palestinians, about 47% of the population, require some kind of aid, according to the OCHA. The HRP targets 1.8 million of those who they say are most in need.

“The impact of prolonged military rule, access restrictions, internal divisions and insufficient respect for Palestinians’ rights as enshrined in international law is now compounded by COVID-19,” said the region’s UN Humanitarian Coordinator and special representative to Palestine Lucia Elmi in a statement.

The regions prioritized for funding include those that the Palestinian Authority can not freely reach, according to OCHA head Sarah Muscroft, including the Gaza Strip, the West Bank and East Jerusalem. Seventy percent of the funds will target Gaza, where its 2 million inhabitants are effectively isolated from the rest of the Palestinian territory.

The deteriorating health care system in Gaza pointed to a catastrophe earlier this month when as many as 32% of the daily coronavirus tests turned out positive. Health experts warned that the coming period would bring much more difficulty.

“The number of critical cases is expected to rise due to the lack of medical equipment and shortage of [medical] oxygen needed for such cases,” said the head of infectious diseases at the Ministry of Health in Gaza, Rami al-Abadla, to Al-Monitor’s Hana Salah.

In the West Bank, settlement expansion and the demolition of homes and other structures have intensified pressure for Palestinians to leave their communities. The area is internationally recognized as Palestinian territory occupied by Israel. Israel captured the land during the 1967 war with Jordan, and thousands of Jewish Israeli settlers now live there alongside the Palestinian majority population.

Last month, Israel moved ahead with a settler housing plan near East Jerusalem that would bring 1,257 new homes to the area. The plan was initially frozen in February after international opposition. Israel cites historical, political and biblical links to the land.

In 2019, the United States shifted its position by announcing that Washington no longer considered Israeli settlements inconsistent with international law.

“We believe that what we’ve done today is we have recognized the reality on the ground,” said US Secretary of State Mike Pompeo. “We’ve now declared that settlements are not per se illegal under international law, and we have provided the very space … for Israel and the Palestinians to come together to find a political solution to this very, very vexing problem.”

Last month, Pompeo became the first US Secretary of State to visit one of the settlements.

In January, US President Donald Trump proposed a Middle East plan that set the stage for Israel to begin annexing all of its settlements in the West Bank with US backing. Israel suspended its annexation plans as a condition to signing normalization deals in August with the United Arab Emirates and Bahrain.