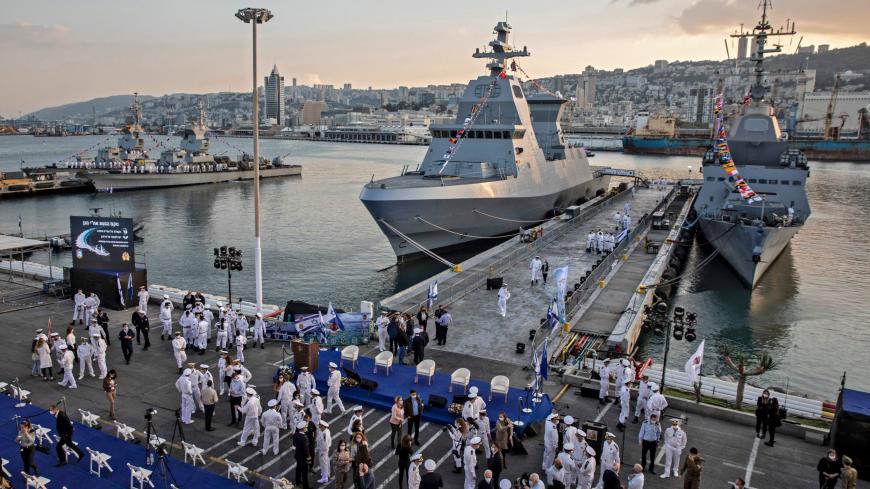 A ceremony marks the arrival of the first of four new German-built Saar 6 naval vessels purchased by the Israeli navy, at the naval base in Haifa, on Dec. 2, 2020. - HEIDI LEVINE/POOL/AFP via Getty Images

The German-made Saar 6 is a corvette, which is a small warship. It docked in Haifa’s port and three ships of the same model will follow next year. The ship possesses missile-firing capabilities. It also has a version of Israel’s Iron Dome technology and can deter rocket and missile attacks, Reuters reported.

The ships were ordered in 2015, but the first Saar 6's arrival comes at a time of higher-than-usual tensions between Israel and Iran. Iranian nuclear scientist Mohsen Fakhrizadeh was assassinated last week. Israel has not taken credit for the attack, as per its modus operandi, but Iran suspects the slaying was the work of Israel. A Western diplomat told Al-Monitor the same.

Iran has vowed revenge for Fakhrizadeh's death, but has yet to retaliate.

Iran supports Israel’s enemies Hamas in the Palestinian territory of Gaza and Hezbollah in Lebanon, and backs the government of Bashar al-Assad in Syria. Israel is suspected of regularly bombing Iranian targets in Syria and carrying out sabotage operations in Iran, including on its nuclear facilities. Iran is also suspected of conducting cyberattacks on Israel.

The Saar 6 could bolster Israel’s military technology superiority in a conflict. The Israeli news outlet Arutz Sheva dubbed it as Israel’s “most advanced” missile ship. It weighs 2,000 tons and is the length of a 25-story building. It also can launch helicopters. The ship is particularly suited to protect Israel’s natural gas reserves in the eastern Mediterranean Sea, according to Arutz Sheva.