At least one Iraqi civilian was injured in the strike, the US State Department said. 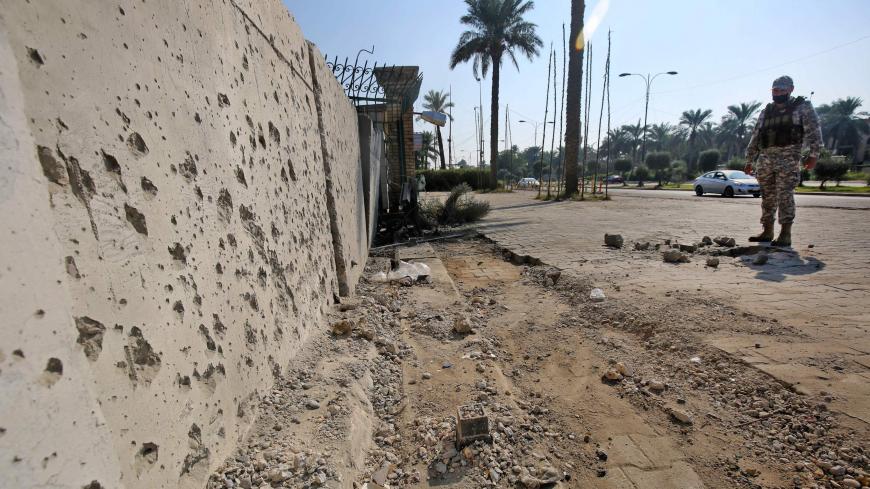 A member of the Iraqi security forces inspects the damage outside Zawraa park after volley of rockets slammed into the Iraqi capital breaking a monthlong truce on attacks against the US Embassy, Baghdad, Iraq, Nov. 18, 2020. - Ahmad al-Rubaye/AFP via Getty Images

A barrage of Katyusha rockets rained down near the US Embassy in Baghdad’s Green Zone on Sunday in the latest attack which the United States has blamed on Iran-backed militias.

The US State Department said at least one Iraqi civilian was injured as a result of strikes and that the embassy suffered minor damage. Iraq’s military blamed “an outlawed group” for the attack.

American counter-rocket, artillery and mortar systems (C-RAM) engaged the rockets, throwing streams of illuminated tracer shells into the night sky over the Iraqi capital on Sunday.

Kataib Hezbollah, one of the most powerful Iran-backed miltias in Iraq, also criticized the attack, calling it “not appropriate.” Powerful Iran-linked militias declared a pause on their attacks on US personnel and facilities in Iraq in October.

Sunday’s fusillade comes just two weeks ahead of the Jan. 3 anniversary of Soleimani’s killing by a US drone strike in Baghdad.

Pompeo warned Iraqi President Barham Salih in September that if militia attacks did not stop, the United States would pull its personnel from the Iraqi Embassy and target the militias without distinction.

The US military is slightly reducing its roughly 5,000 troops in Iraq on orders from President Donald Trump.

Over the last few weeks, Washington has deployed two separate long-range strategic bomber missions to the Middle East and sent the USS Nimitz aircraft carrier back to the region as a deterrence against potential hostile actions by Iran.

The latest B-52 flight came after Iran’s Supreme Leader Ayatollah Ali Khamenei called for retaliation over last month’s assassination of a top nuclear scientist. Officials in Tehran have blamed Israel for the hit.

Tehran has expanded what is believed to be its main nuclear site at Natanz and enriched uranium beyond limits set by the 2015 nuclear agreement in response to the US campaign of economic sanctions on Iran, put in place after the Trump administration walked out of the nuclear deal in 2018.

In the final days of his administration, Trump has reportedly given Pompeo and other officials a blank check to “punish” Iran short of “start[ing] World War III.”