The tanker reportedly hid its real name. The United States sanctions the oil industries of both Iran and Venezuela. 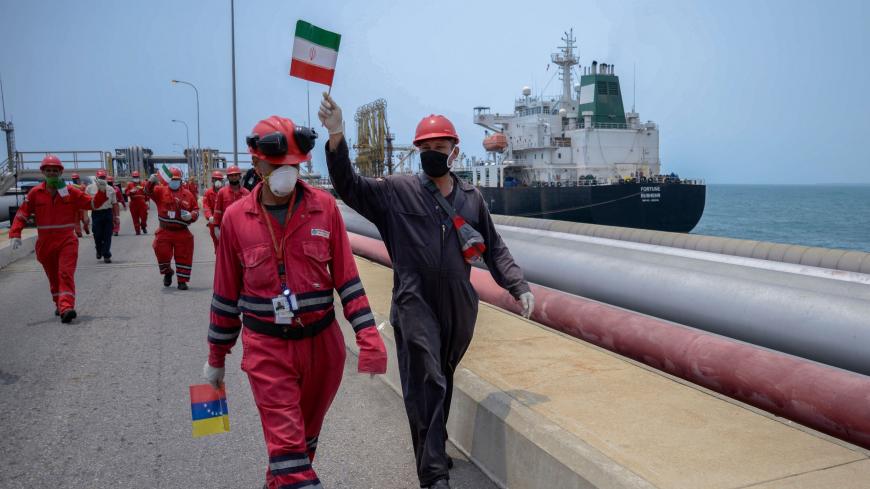 A worker of the Venezuelan state oil company PDVSA waves an Iranian flag as the Iranian-flagged oil tanker Fortune docks at the El Palito refinery in Puerto Cabello, in the northern state of Carabobo, Venezuela, on May 25, 2020. - AFP via Getty Images

An Iranian tanker is currently in Venezuela to load oil for sale in Asia, Reuters reported Tuesday.

The tanker is contracted by the National Iranian Oil Company and used the name Ndros, which is a tanker that is no longer in use. Some partners of Venezuela’s state-run Petroleos de Venezuela oil company are using names of old tankers to disguise themselves. The tanker arrived at the port of Jose last week to lend 1.9 million barrels of oil for sale in Asia, according to Reuters.

A map from the website Marine Traffic showed some unidentified ships near Venezuela’s coast Tuesday.

The US government sanctions both Iran and Venezuela, including their oil industries. This has resulted in the Islamic and Bolivarian republics developing a close political and economic relationship. Venezuela has some of the largest oil reserves in the world and is a member of OPEC. However, its refining industry, which converts oil into usable energy materials, has fallen into disarray.

Iran regularly delivers refined fuel to its South American ally and has also loaded Venezuelan oil to be sold abroad. Iran most recently delivered fuel to Venezuela in September.

The US government pressures companies to not do oil deals with Venezuela and has sanctioned Iranian ships that have brought fuel there. The United States also seized Iranian fuel bound for Venezuela in August.

Iran and Venezuela use a variety of strategies to circumvent US actions, including taking lengthy routes around Africa to avoid the US Navy presence.