Ruhollah Zam, the son of a regime-connected cleric, was charged in June with "corruption on earth" for inciting violence in Iran's 2017 protests. 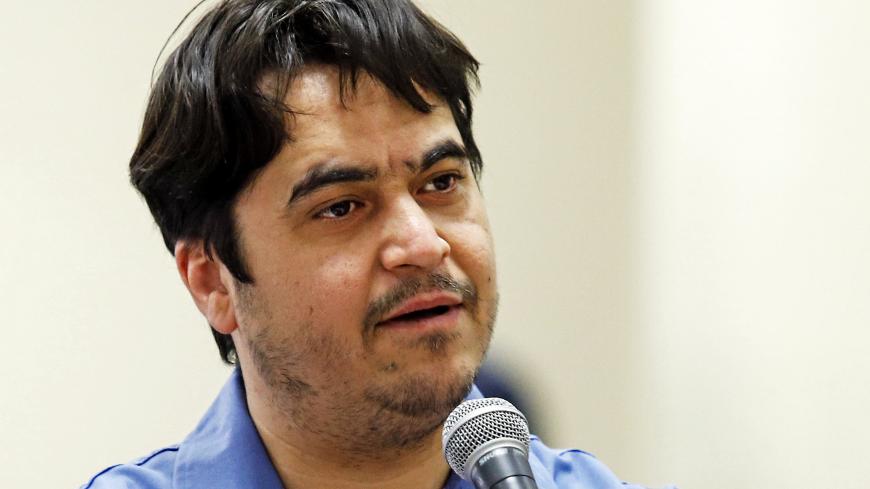 Ruhollah Zam, a former opposition figure who had lived in exile in France and had been implicated in anti-government protests, speaks during his trial at Iran's Revolutionary Court in Tehran on June 2, 2020. - ALI SHIRBAND/MIZAN NEWS/AFP via Getty Images

Ruhollah Zam was found guilty in June of “corruption on earth,” a charge often used in cases of espionage or attempts to overthrow the government, and inciting violence that supported anti-government demonstrations. Through Zam and others, Iran accused the West of encouraging unrest over economic hardship that sparked mass demonstrations in late 2017. Over 20 people were killed and thousands were arrested.

"The Islamic Republic has a rich track record in looking for scapegoats to point out why people come to the streets over the last 42 years to protest," said Alex Vatanka, director of the Middle East Institute’s Iran program. “The headline they want to go with is that there's some kind of a plot that is being pursued by internal enemies of the Islamic Republic — infiltrators, as they like to call them.”

Since the Iranian Revolution in 1979, Iran has repeatedly accused Western actors of efforts to destabilize its regime, often citing “infiltration networks.” The regime even filed criminal charges against Russian national Pavel Durov, who created the free messaging app Telegram that was a popular platform to spread protest times and locations.

But Zam’s case is unique. As the son of a regime-connected, pro-reform Shiite cleric, he’s not exactly an outsider. He was even named after the founding father of the Islamic Republic, Ayatollah Ruhollah Khomeini. After the 2009 Iranian presidential election, Zam turned against the establishment and was imprisoned in Evin Prison and later fled to France.

“My father works for the Rouhani government; he is loyal to the regime,” Zam told Bild in 2018. “If I had stayed in Iran I would have led a good life, but I gave everything up to work toward a free Iran.”

The 2017 protests that began in the city of Mashhad and spread throughout the country were fueled by economic hardship and set off by a sharp increase in food prices. Protesters later turned their attention against the entire ruling class. Although the regime met demonstrators with a harsh crackdown, even larger protests followed last year, sparked by a rise in fuel prices.

The regime accused Zam of helping inspire the protests, but his arrest may be a product of infighting within the regime. Although the journalist could have worked for Western intelligence services, they’re not the ones that took him out of Iran, Vatanka said.

Upholding the sentence could now be an attempt to highlight the strength of Iran’s intelligence network, especially as it accuses Zam of working with foreign agents. The regime alleges that Zam was taken under a “complex operation using intelligence deception." A series of televised confessions aired earlier this year.

The court's decision comes soon after a Nov. 27 Iranian intelligence blunder that allowed Iran’s top nuclear scientist, Mohsen Fakhrizadeh, to be killed near Tehran. Iranian government spokesperson Ali Rabiee said the Ministry of Intelligence provided the government with a warning before the assassination that went unheeded.

The decision to uphold Zam’s death penalty was condemned by human rights groups. Amnesty International called the decision a “shocking escalation in Iran’s use of the death penalty as a weapon of repression.”

Zam has one more chance to appeal the decision under Iranian law, and the judiciary chief also has the power to cancel the ruling and order a retrial if he finds it was in violation of Sharia. It’s not clear when Zam’s sentence would be carried out.