Iranian officials have grown alarmed over the new strain of the coronavirus that appears much more contagious. 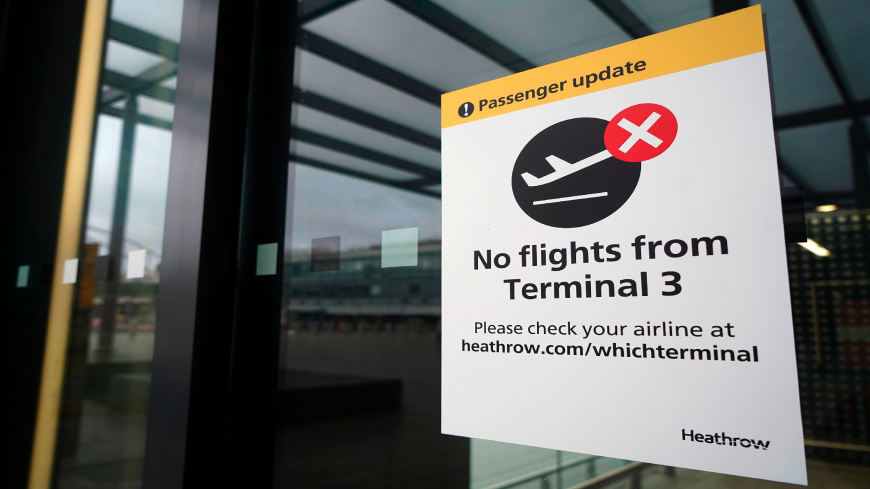 A sign alerts travels to the closure of Terminal 3 at Heathrow Airport in west London on Dec. 21, 2020, as a string of countries around the world banned travelers arriving from the UK due to the rapid spread of a new, more infectious coronavirus strain. - NIKLAS HALLE'N/AFP via Getty Images

Health Minister Saeed Namaki called for the suspension of flights earlier today. In a letter that was published online, Namaki also said that anyone who has traveled from or through the UK be immediately tested, quarantined and monitored.

An article in Javan Online, a publication close to the Revolutionary Guards, dubbed the new strain of the virus the “British corona." The article said the new strain is 70% more contagious and is more deadly, though this latter claim has not been proven true.

The new strain has officials in Iran worried. Iran has been one of the countries hardest hit by the coronavirus, and economic sanctions from the United States have prevented the country from enforcing longer lockdowns. Over 50,000 people in Iran have lost their lives to the virus since February, and officials believe the actual number could be twice as high. The country is experiencing its third wave, which has brought daily deaths to an all-time high, reaching well into 300 for the first time since the arrival of the virus.

Officials have tried a variety of restrictions to slow the spread but have had limited success. With the number of holidays that include family gatherings, Iranians have had to restrict travel. According to Iranian police, nearly 60,000 vehicles have been fined for violating the travel restrictions.

With a number of Western countries rolling out their vaccines to health care workers, the question about when Iran will have access to a vaccine has arisen. Iranian officials say they will roll out an Iranian vaccine by summer 2021. In the meantime, they will seek to import the vaccine for health care workers, who have paid a particularly large price.

But according to Hosseinali Shahriari, chairman of parliament’s Health Commission, there have been problems securing money for the subsidized exchange rates to make such purchases possible. He said the problems securing funds for the influenza vaccine are similar to the present issues in acquiring a coronavirus vaccine. Shahriari did not say whether the problem might be that Hassan Rouhani's administration could not or would not allot funds for this.

The head of the Medical Council of the Islamic Republic of Iran, Mohammad Reza Zafarghandi, said that acquiring the vaccine and distributing it should be a priority for all public and private institutions in the country and not just for the administration. He said the idea previously discussed of providing 50 million vaccines over an eight-month period would not be effective in stopping the spread of the virus, and the timespan needs to be three months.