Women in Gaza take up boxing despite social stigma

Despite the patriarchal and religious stigma surrounding female sporting activities in the Gaza Strip, several women and girls have joined a boxing team out of love for this sport. 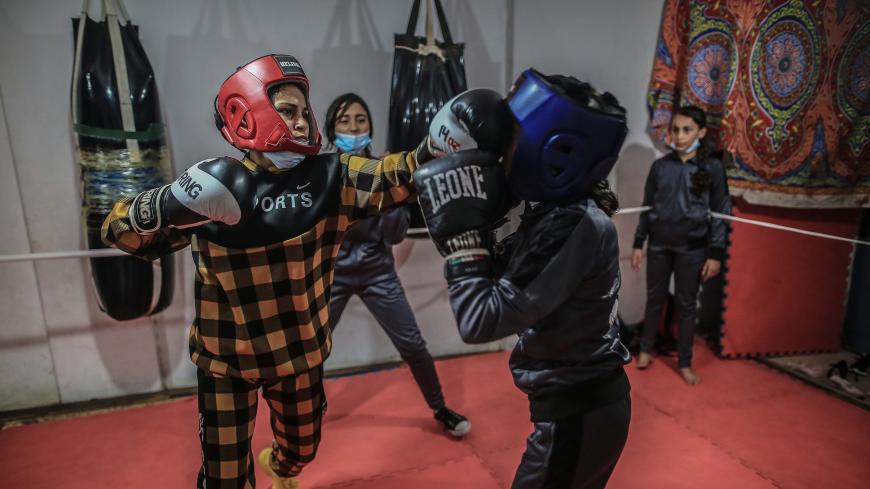 Society in the Gaza Strip sees boxing for women as an instigator to violence against their husbands in the future and has repeatedly slammed women for practicing it, in an attempt to get them to quit it.

Despite the obstacles, Gazan women have fought for their right to practice boxing in a society that keeps proving its patriarchal character first and foremost with its repeated refusal of women to participate in sports and other fields, restricting women’s roles to marriage and the home.

However, some support women's rights to live their lives as they see fit, as long as they do not undermine traditions and norms.

Malak Mosleh, 15, has watched several boxing training and championships of boxer Muhammad Ali who made her fall in love with the sport when she was a child. After many attempts to find a boxing team in Gaza, she finally got the opportunity to realize her dream with the support of her family.

She told Al-Monitor, “I have long wanted to practive boxing but could not [in Gaza]. The sport was only open to men, which bothered me. After all, it is a sport for the body and soul, so why would women be banned from practicing it? I was surprised when Captain Osama announced a training program for girls. I joined seven months ago. I decided to continue until the end [to participate in the Arab Junior Boxing Championship in Kuwait], despite what society had to say about this.”

Osama Ayob, 36, the coach of the girls boxing team in Gaza, decided after a tour in several European and Arab countries to create a boxing team for girls without the support of any party, at his own expense.

In early 2020, he announced through his Facebook page the launch of a boxing training program for women. The team was initially made up of 10 girls, and continued to grow until it reached 45 girls and women aged between seven and 25.

Ayob told Al-Monitor, “Forming a team of girls was difficult for me because it is the first one in Gaza, and it took personal effort without anyone's support. There was a strong turnout of girls, and I really wished that society’s harsh view of them would change. I took it upon myself to protect them and toughen them against insulting comments that demoralize them and curb their desire to practice this sport.”

Mosleh said, “Boxing has nothing to do with violence. It is a means of self-defense and body strengthening. I do not wait for anyone to protect me from an attack in the street or elsewhere. I am capable of protecting myself. My family is my biggest support, and they told me that Islam did not ban sports and encouraged me not to let social perceptions stand in the way of my dream. They reassured me that I am not doing anything religiously prohibited or harmful to social decency.”

Rima Abu Rahme, 22, from Gaza City had a tough time when she took photos of herself and her sister Rita, 20, while boxing with their female friends and posted them on social media. It was the first time she felt how harsh and resentful society was toward women’s sports in Gaza.

She told Al-Monitor, “I follow [American-Palestinian model] Gigi Hadid [on social media] who practices this sport. I talked to Captain Osama to train, and we started effectively [learning the sport] until our photos during training went viral. We were scared of society’s comments, and some threatened to halt the sport and pressure the coach into that.”

This severe attack on girls on social media reflects many people’s opinion that this sport is reserved for men and that girls should not practice it. Many girls quit after social media users threatened them and the coach, bullied them and insulted them.

Abu Rahme describes boxing, saying, “We felt fatigue and pain in our bodies for the first time, but we realized that our bodies become stronger after every exercise, and we later feel comfortable psychologically. I am a language graduate, and I have to do internships in institutions. The psychological fatigue I feel goes away with the punches within an hour of exercise.”

Ayob said, “Many girls are under psychological pressure and face problems in society. They find boxing as a way to relieve the pressure, but their extreme fear of society forces them to train quietly without drawing attention. It is their right, with all the negative comments that threatened to stop boxing for girls in Gaza. I work assiduously on overcoming all obstacles and continuing training for this sport.”

Farah Abu Qomsan, 15, from Gaza City, took up boxing out of love for it and a strong desire to fulfill her dream. She won first place in the first boxing championship for girls held in Gaza [on Nov. 20]. She joined Ayob’s boxing team for girls seven months ago and devoted her time three days a week for practice to improve her performance and reach the level that qualifies her to participate in international tournaments.

She told Al-Monitor about her love for boxing, saying, “My admiration for the performance of world-class boxer [Mike] Tyson pushed me to commit to this sport after I found it in Gaza. I train to protect myself from situations that I might encounter while walking on the street and in anticipation of any accident I might face during my life. This has nothing to do with violence against men.”

Ayob is working hard with his team to participate in the Arab Junior Boxing Championship in Kuwait at the end of February 2021. He has already selected seven girls to take part in the championship, but he still needs official support to pay for the plane tickets and other travel expenses. This would be the first time girls from Gaza participate in the championship as part of a Palestinian national boxing team.

Meanwhile, the coronavirus pandemic has hindered training during the few months since the first female boxing team was established. Ayob said, “Preparing the girls’ boxing team was not complete due to the coronavirus outbreak. But practice continued, and I focused on [strengthening] the girls' strength while adopting preventive measures for their own safety and that of their families.”