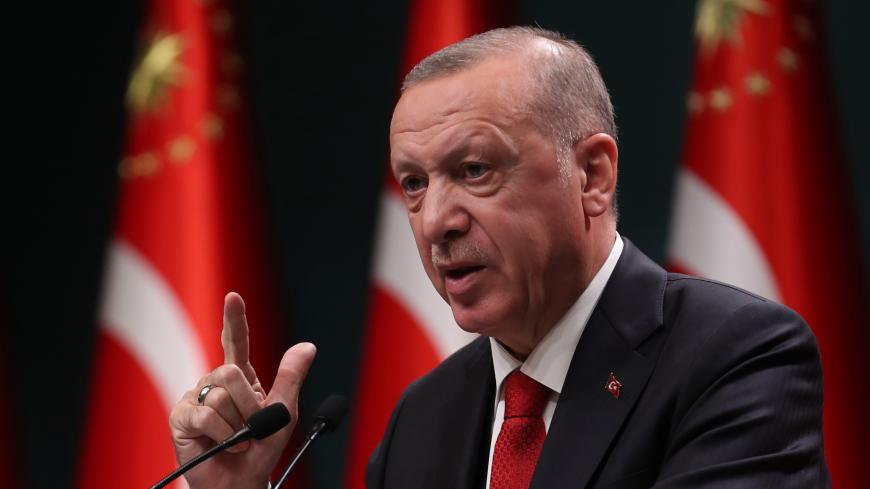 Turkish President Recep Tayyip Erdogan makes a speech after a Cabinet meeting at the Presidential Complex in Ankara on Nov. 3, 2020. - ADEM ALTAN/AFP via Getty Images

Turkish President Recep Tayyip Erdogan said Friday that it would be “disrespectful” for the Trump administration to sanction a fellow NATO member, after reports this week suggested sanctions for his country’s purchase of Russian-made air defense systems were imminent.

Reuters reported Thursday that the outgoing administration will impose the long-awaited sanctions, with sources telling the news agency an announcement could come any day.

Turkey tested the Russian-made S-400 system in October; the United States says the system poses a threat to NATO’s air defense capabilities and may compromise the security of its own F-35 stealth fighter jets. Washington booted Turkey from the joint strike fighter program last year and has repeatedly warned Ankara it risked congressionally mandated sanctions.

"For America to get up and confront Turkey with a matter like CAATSA is disrespectful to a very important NATO partner," Erdogan told journalists Friday, according to the state-run Anadolu Agency.

"I don't know where this will lead to before Trump leaves but during the four-year Trump period, I didn't have any problems in communicating with America," Erdogan said.

Erdogan added that he will “patiently wait and see” how the next administration handles the sanctions, adding that he expects warm relations with President-elect Joe Biden.

"He is someone who knows me very well. And I know him very well," Erdogan said of Biden, who has previously described the Turkish president as an “autocrat.”

Separately on Friday, European Union leaders meeting in Brussels announced they would be sanctioning a number of Turkish officials and companies over the country’s drilling activities in the eastern Mediterranean. A territorial dispute escalated this summer after Turkey deployed its Oruc Reis research vessel to conduct exploratory work in waters claimed by two of the EU’s member states, Greece and Cyprus.