Is Egypt ready to turn page on Gulf crisis with Qatar?

Egypt has welcomed the recent Kuwaiti efforts to end the Gulf crisis pitting a Saudi-led bloc of nations, including Egypt, against Qatar. 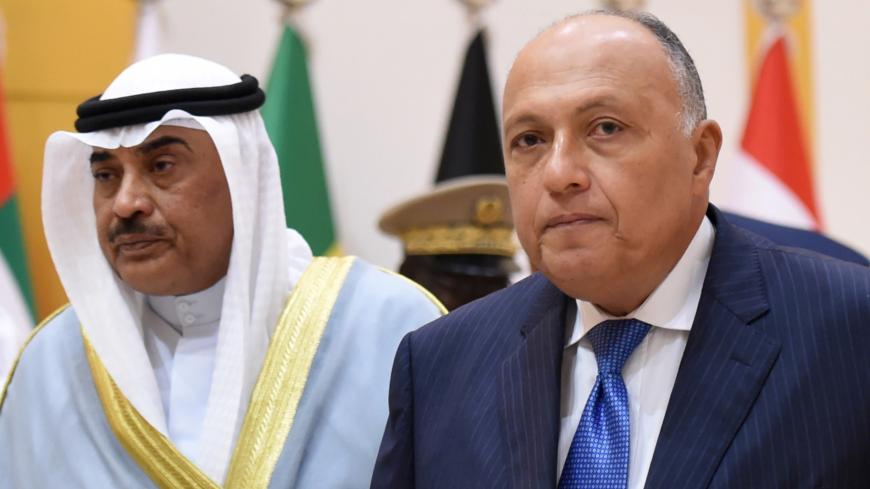 After Saudi Arabia and Kuwait recently announced that they had made progress toward ending the dispute Egypt and the Gulf Cooperation Council (GCC) have with Qatar, Egypt's Foreign Ministry praised Gulf efforts, particularly those of Kuwait, aimed at bringing an end to the yearslong crisis that has pitted Doha against Egypt, Saudi Arabia, Bahrain and the United Arab Emirates.

In a Dec. 8 press statement, Egyptian Foreign Ministry spokesman Ahmed Hafez expressed his country’s appreciation of the continued efforts made by Kuwait’s emir to heal the Arab rift and settle the crisis that broke out in 2017 between Qatar and the Arab Quartet countries, within the framework of Kuwait’s constant desire for stability in the region.

“We hope that these commendable efforts will pave the way for a comprehensive solution to all the causes of this crisis and ensure strict and serious commitment to what will be agreed upon,” Hafez added.

In a statement carried by the Kuwait News Agency on Dec. 4, Kuwaiti Emir Sheikh Nawaf al-Ahmad al-Jaber al-Sabah expressed his appreciation for the ongoing and constructive efforts being deployed to end the Gulf crisis.

Kuwaiti Foreign Minister Sheikh Ahmad Nasser Al-Mohammad Al-Sabah said in a speech broadcast on the official Kuwait TV on Dec. 4 that fruitful discussions had been taking place to resolve the Gulf crisis, which has been ongoing since 2017.

He added that during these talks, “All parties affirmed their keenness to achieve Gulf and Arab solidarity and stability and reach a final agreement on permanent solidarity between their countries in a bid to serve the interest of these countries’ people.”

He also thanked US President Donald Trump for “his support [to end the Gulf crisis], which reflects the US commitment to preserve the security and stability of the region.”

The Kuwaiti foreign minister further said his country's efforts to resolve the Gulf crisis are ongoing based on the directives of the political leadership.

“The Kuwaitis have been the key mediator here and still continue to play that role,” Lenderking said.

Saudi Arabia, the UAE, Bahrain and Egypt cut diplomatic relations and trade and travel ties with Qatar in mid-2017 over its alleged support to terrorism. Doha has repeatedly denied the accusations.

The four countries set 13 demands that Qatar needed to meet for the relations to be restored, including the closure of the Al Jazeera channel, the closure of a Turkish base on its territory and the severing of relations with the Muslim Brotherhood.

On Dec. 9, Egyptian Foreign Minister Sameh Shoukry told journalist Ahmed Moussa on Sada al-Balad TV that “understandings and contacts have taken place” regarding reconciliation with Qatar, adding that there are suggestions for a new phase that seeks to shun “the negative effects of Qatari policies.”

He added, “If there is a sincere political will to overcome this crisis, Egypt will be seeking consensus and brotherly relations.”

Asked whether the four countries have set demands in order for the reconciliation with Qatar to materialize, Shoukry said in another interview on Ten TV on Dec. 8, “A framework has been developed over the past few days to solve the issues behind this problem, and we always welcome anything that achieves Arab solidarity and defuses tensions. However, the agreement that is being elaborated needs to be comprehensive and should take into account all the factors that led to this current situation.”

Shoukry added that his country is willing to positively deal with any proposal that achieves Arab solidarity and defuses tensions, and stressed that there have been developments over the past few days with regard to efforts to try to solve the Gulf crisis.

While Bahrain has yet to comment on such efforts, UAE Minister of State for Foreign Affairs Anwar Gargash tweeted Dec. 8 that his country “appreciates the efforts of sisterly Kuwait and the US endeavors toward strengthening solidarity in the Gulf. It also supports, on behalf of the four countries, the sound Saudi efforts.”

US officials say they believe the dispute with Qatar is impeding the establishment of a united Gulf front to confront Iran.

Gargash added in his tweet that the UAE “knows full well that the GCC relations with brotherly Egypt are a fundamental pillar in preserving Arab security and stability in the region, and it is looking forward to a successful Gulf summit.”

The reconciliation efforts also have been welcomed by the secretary-general of the Organization of Islamic Cooperation, Yousef Bin Ahmad Bin Abdul Rahman Al-Othaimeen, who in a Dec. 4 statement praised the efforts made by Kuwait to promote Arab and Gulf solidarity and stability.