Egypt received offers from Saudi Arabia and Kuwait to invest in projects to expand the Cairo and Sphinx international airports, as part of efforts to boost tourism and put Egypt on the global transit map. 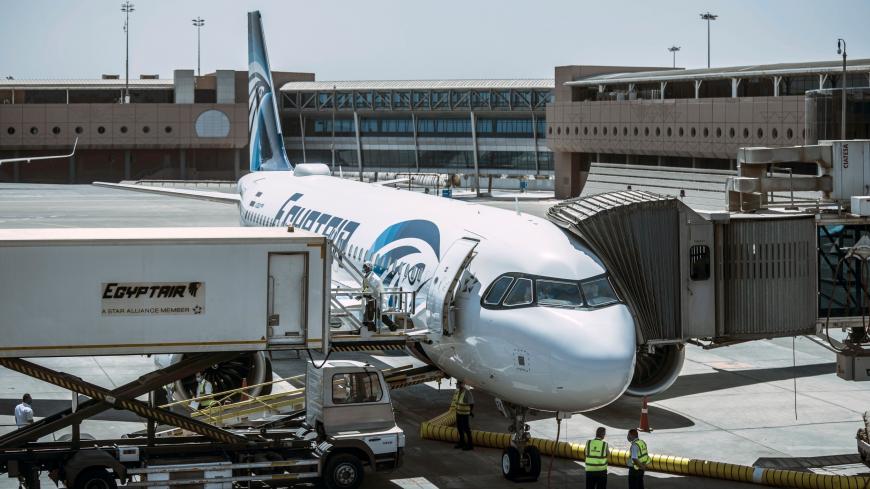 An EgyptAir Airbus A320neo aircraft sits on the tarmac of Cairo International Airport on June 18, 2020. - KHALED DESOUKI/AFP via Getty Images

Egypt’s Minister of Civil Aviation Mohamed Manar Enabah announced Dec. 12 that his ministry had received investment offers from Saudi Arabia and Kuwait to compete in the bids for cargo village projects at Cairo International Airport and the Sphinx International Airport.

Saudi investments rank first among Arab countries investing in Egypt, and second in terms of global investment. Total Saudi investment in Egypt in 2019 stood at $54 billion, of which $44 billion is allocated to Saudi companies or their partners in Egypt, whose numbers total 5,392. There was $10 billion in Saudi government investments through the Public Investment Fund of Saudi Arabia in 2019.

Kuwait investments in Egypt range between $16 billion and $19 billion, in addition to the Kuwait Fund for Arab Economic Development's support for many projects in Egypt. The fund has contributed to some 56 programs and grants over the years; development projects in South Sinai cost $3 billion and included the opening of the Sharm el-Sheikh tunnel road connecting Sharm el-Sheikh to Cairo through a tunnel under the Suez Canal. This is in addition to several electrical power and seawater desalination projects.

Enabah said in a press statement that his ministry aims to establish cargo village and logistical areas at the Cairo and Sphinx airports on the Cairo-Alexandria desert highway. He said his ministry coordinated with the General Authority for Investments of Egypt to take over investment tenders to implement these projects.

The airport building is expected to include a travel hall with an area of 6,500 square meters (70,000 square feet), an arrival hall of 7,000 square meters, a food and beverage area of 1,000 square meters, duty-free shops, passport offices, an X-ray area and 28 check-in counters. This is in addition to a banking and quarantine area, a baggage claim area, eight passport counters, eight escalators, and a cooling plant with a capacity of 1,440 tons of refrigeration.

The project at the Sphinx airport also includes the building of a 310-meter-long (1,000-foot) electric walker, a 60-meter bridge, a 1,200-meter waiting hall and duty-free areas. Officials say 35% of the project has been implemented.

Within the framework of the incentives by the ministries of aviation and investment to attract investors and provide them with all information and services, the two ministers agreed in March to establish an office for the General Authority for Investments inside Cairo International Airport. This is in order to respond to investors’ inquiries and to provide them with information, data and publications related to laws, legislation and regulations governing the investment climate, and to present and promote investment opportunities on the government portal.

Ahmad Adel, a pilot and chairman of the EgyptAir Holding Company, said he believes the aviation sector is a main pillar for the success of economic plans as it contributes to the development of foreign and domestic tourism movement and stimulates trade. He told Al-Monitor, “It also contributes significantly to the development of resources, support and improvement of the national economy because of its impact on many sectors in the country, whether service or production sectors.”

Adel said these investments will contribute to raising the efficiency of the Cairo and Sphinx international airports, and will increase their capacities and enhance their competitiveness.

In 2018, EgyptAir signed a partnership agreement with the Emirati KMK Investment company and its strategic US partner, Safe Ports Holdings, for the purpose of establishing a cargo village at Cairo International Airport.

The agreement under which KMK was to finance, design and construct the project, as well as operate the cargo village and oversee EgyptAir's projects in the field of cargo and exports, has not been completed.

The Aviation Ministry is aiming to turn Egyptian airports into pioneers at the African level and to compete at the regional and global level, most notably through the development of airports to accommodate an expected increase in air traffic, in addition to maximizing the resources of non-navigational activities to achieve the highest return on investment, and strengthening airport security and safety management systems to achieve local and international standards.

The ministry also aims to effectively qualify the human component, to be able to implement goals effectively, in addition to providing services at airports in a way that meets local and international standards through efficient and effective management as well as working on sustainable development.

According to Egypt’s Al-Mal newspaper, the Civil Aviation Ministry is negotiating with a global logistical area operator in a bid to establish a logistical area at the Cairo International Airport.

The newspaper cited sources familiar with the negotiations as saying that the project’s expected area would be up to 4 square kilometers (1.5 square miles) as a first stage and that the operator, which they did not name, is one of the most prominent ones globally. Preliminary studies say the initial investment could be 13 billion Egyptian pounds ($827.5 million). The project aims to place Egypt on the transit map in air freight, in addition to reducing the cost of transporting, loading and unloading goods.