The London-based rights group called on Airbnb to unlist around 200 rental properties in the West Bank. 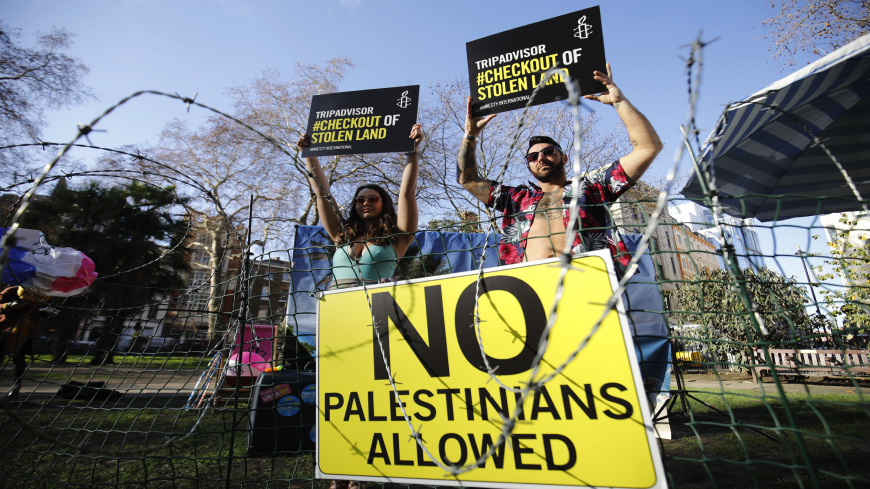 Rights group Amnesty International staged a demonstration outside the UK headquarters of US travel company TripAdvisor in London on Jan. 30, 2019. Digital tourism giants Airbnb, Booking.com, Expedia and TripAdvisor are profiting from "war crimes" by offering services in Israeli settlements, the rights group said in a published report. - TOLGA AKMEN/AFP via Getty Images

As Airbnb's made its long-awaited public market debut, Amnesty International accused the home-sharing company of being “deeply compromised” by its Israeli settlement listings in the West Bank.

The London-based rights group said Airbnb has some 200 properties for rent in settlements that are widely considered illegal by the international community.

“Shamefully, Airbnb has been promoting and benefiting from a situation that is a root cause of the systematic human rights violations faced by millions of Palestinians on a daily basis," Saleh Higazi, deputy regional director for Middle East and North Africa at Amnesty International, said in a statement.

Airbnb “needs to do right by future investors and stop benefiting from illegal settlements,” Higazi said.

In February, the San Francisco-based service was named in a United Nations database of 112 companies linked to Israeli settlements in the West Bank and East Jerusalem, including Booking.com, Expedia Group and Motorola Solutions.

Amnesty said Airbnb’s regulatory filing with the US Securities and Exchange Commission (SEC) did not mention its business operations in the West Bank or that the company appeared on the UN blacklist.

The Palestinians envision the land Israel captured in the 1967 war as part of their future independent state. In a reversal of decadeslong US policy, the Trump administration said last year that the settlements on the contested land do not violate international law.

In 2018, Airbnb said it would get rid of its settlement listings, but the next year it reversed that decision and offered to donate the profits to “nonprofit organizations dedicated to humanitarian aid that serve people in different parts of the world.”

Airbnb’s shares opened at $146 on the company’s first day of trading Thursday, a 115% increase from its initial public offering price.