Palestinians trying to dig themselves out of isolation

It seems Palestinians are trying to get out of international and Arab isolation by taking a series of measures, including restoring ties with Israel and returning their ambassadors to the UAE and Bahrain, in anticipation of the Joe Biden administration’s arrival into office. 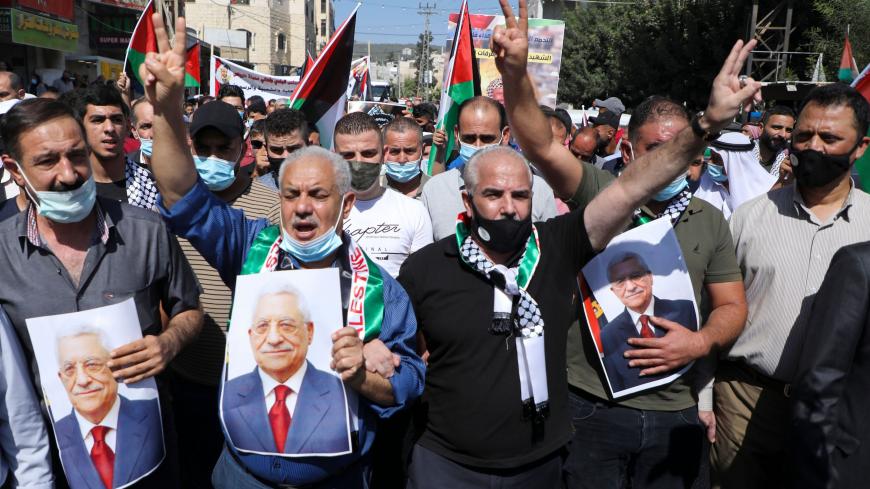 Palestinians carry a portrait of President Mahmoud Abbas as they gather to commemorate the second intifada and to protest the Israeli normalization deals with the United Arab Emirates and Bahrain, in the town of Tubas, in the occupied West Bank, on Sept. 27, 2020. - JAAFAR ASHTIYEH/AFP via Getty Images

Scientists say animals have an internal clock that triggers a series of chemical reactions for them when it is time to wake up from a long hibernation. This might be the most appropriate metaphor for what is happening with the Palestinian leadership in recent days.

Once the electoral victory of Joe Biden as the next US president became clear, Palestinian President Mahmoud Abbas and his closest wing (led by intelligence chief Majed Faraj and Civil Affairs Minister Hussein Sheikh) went into action. It began with Hussein Sheikh announcing Nov. 17 that Palestinians will return to the status quo with the Israelis and renew security coordination. This was not a one-off statement, and two days later Sheik was holding a public meeting with his Israeli army counterpart, the Coordinator of Government Activities in the Territories Kamil Abu Rukun.

The main goal of the renewal of relations with the Israelis after a six-month hibernation was financial. Palestinians wanted to regularly receive the revenue of tax and customs money that Israel collects on their behalf.

The decision to return the ambassadors coincided with the Bahraini foreign minister’s unprecedented visit to Israel, where he also met with the US secretary of state — who also was making an unprecedented visit to an illegal Israeli settlement. Bahrain and Israel also announced that they would open an embassy in each other’s country.

The leading Palestinian Al-Quds newspaper described what has been happening to the Palestinian cause as an avalanche. “The Arab wall the Palestinian leadership had been leaning on has started to fall as most Arab countries appear to care for nothing more than their own personal interest at the expense of the Arabs' leading cause.”

Al-Quds concluded its Nov. 19 editorial with a call for self-reliance. “What is expected of the Palestinian leadership is to work in all ways to unify Palestinians so that they can face the challenges of the coming phase without depending on others, but focusing on our people and its unity as the only way to accomplish the victories.”

But Issa said he believes that the “Palestinian side is in a real bind as a result of the normalization agreements that happened and is now convinced that the world, including the Arab world, applies double standards when it deals with Palestine according to international law.”

The victory of Biden in the US elections was not the only reason for Palestinians to renew their relations with Israel and return their ambassadors, but it appears to have triggered other changes in the region. The Jordanian monarch, whose country had a lukewarm response to the normalization agreements, was invited for a quick summit with leaders of Bahrain and the UAE in Abu Dhabi. It appears that those countries’ leaders, who have placed all their eggs in the Trump basket, are in need of a regional partner who can help them with the incoming Biden administration. The tripartite summit Nov. 18 produced a strong pro-Palestinian statement that reiterated those countries' support for the two-state solution.

Issa said, “The recognition by those Arab countries that the solution of the Palestinian cause will only take place through the establishment of an independent Palestinian state and the fact that they restated their support for international law as the arbitrator means that despite the presence of normalization, there is still strong support for Palestine among the Arab leaders.”

So, in addition to the victory of Biden (or possibly as an indirect result of it), the return of Palestinian ambassadors will usher in a renewed Palestinian faith in the diplomatic process, which will certainly require the support of Arabs and Muslims as well as others around the world.

Whether Palestinian leaders have been in hibernation during Trump’s four-year term or just in the last six months, Palestinians are back in action and they are now eyeing the international peace conference that Abbas called for to take place early in 2021 as the vehicle for this renewed diplomacy. In the meantime, however, Palestinians are also hopeful that the new Biden-Harris administration will respect one of the last decisions of the Obama-Biden administration to allow the unanimous support of UN Security Council Resolution 2334 that called settlements illegal and ordered the immediate suspension of any further settlement activities.