Turkish attacks on the PKK in Iraq's Kurdistan Region have forced the KRG to increase checkpoints and security. 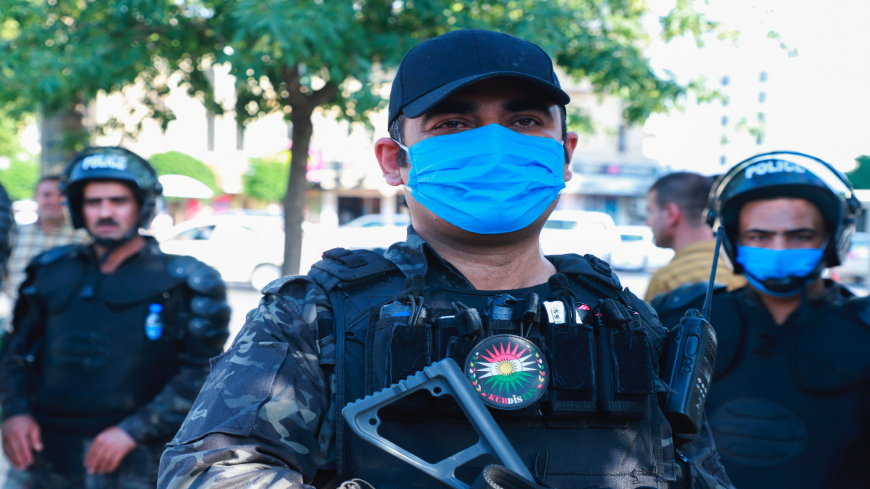 Kurdish riot police, some wearing protective masks due to COVID-19, stand guard during a demonstration to denounce the Turkish assault in northern Iraq, in Sulaimaniyah city, in the Kurdish autonomous region of northern Iraq, on June 18, 2020. Turkey launched a rare ground assault into northern Iraq on June 17, deploying special forces against rebels from the Kurdistan Workers Party (PKK), which is blacklisted by Ankara as a "terrorist" group. - SHWAN MOHAMMED/AFP via Getty Images)

Maryam Shmoil thought it was unusual that she and her daughter were stopped on Nov. 6 from entering into Nahla Valley, a northern Iraqi region home to ethnic Assyrians. Shmoil owns a house in the area and said she travels from Erbil to Nahla nearly every weekend, but a new checkpoint was turning away visitors and limiting the amount of food and energy resources for locals.

The checkpoint joins a string of increased security measures by the Kurdistan Regional Government (KRG) to cut off resources to militants of the Kurdistan Workers Party (PKK), which is designated as a terrorist organization by the United States, Turkey, the European Union and Israel, among others. While the uptick in PKK activity includes attacks on peshmerga forces as militants from the group have been pushed further south into the KRG region, there has been increased harassment targeting locals.

“It’s my land and I don’t have the authority to go there with freedom,” Shmoil said. “We need to solve this problem. Not just the checkpoints, but also the challenge with the PKK there for many years. People there [do not have] any kind of human rights.”

The KRG has repeatedly asserted that the measures are aimed at bolstering security in the north in their defense against the PKK. Turkey has increased its military operations in recent months against the militant group in border areas in Iraq’s north, ratcheting up aerial attacks and pressuring fighters who have used the region as an informal base of operations in its campaign against Ankara. The Turkish attacks have driven PKK militants further into the KRG region, where their presence has caused friction with locals and peshmerga forces. Earlier this month, PKK fighters reportedly attacked peshmerga soldiers in Dahuk, killing one soldier and injuring two others.

Iraq’s Nahla Valley, located within Dahuk province, is home to about 700 Assyrians, an ethnic community indigenous to Iraq, Iran, Turkey and Syria. There has been friction between the locals and the KRG for years, citing land grabs and voter suppression.

Strictly enforced checkpoints largely avoided the region until two months ago when about half a dozen began cropping up in the rural area. At the end of October, locals began citing two checkpoints, one at Bakrman and another at Sharman, that were implementing food rations and not allowing the entry of visitors.

The ration amounts vary depending on the guard at each site, sources said, but it’s never above 10 kilograms and often is much less. Trucks that visit the region selling fruits and vegetables have been barred from entering.

The owner of a corner market store in the valley said he tried to enter Nahla with new produce for his business but was turned away. Instructed to receive permission at an Asayish (security) station, he turned around and traveled to the nearest post in Akra, about 45 minutes away. The permission slip must be applied for and granted for each trip into the region that includes food or energy resources such as oil and wood for furnaces, locals said.

The latest checkpoint measures come as citizens brace for the winter months. The PKK has discouraged locals from chopping firewood from nearby forests, a business owner in the valley told Al-Monitor, and that is now coupled with KRG food and energy rations at checkpoints. Citizens are now concerned over how to keep their houses warm in the ensuing winter months, he said.

Farid Yaqoub, head of Al-Rafidain block in the Kurdistan parliament, has urged the government to review its policies on “imposing a siege on the people” and has requested officials lift the checkpoints.

“Our fear is the harassment of people to leave the only Assyrian region with a large population as well as the government evading its responsibility to provide services to the area,” Yaqoub told Al-Monitor.