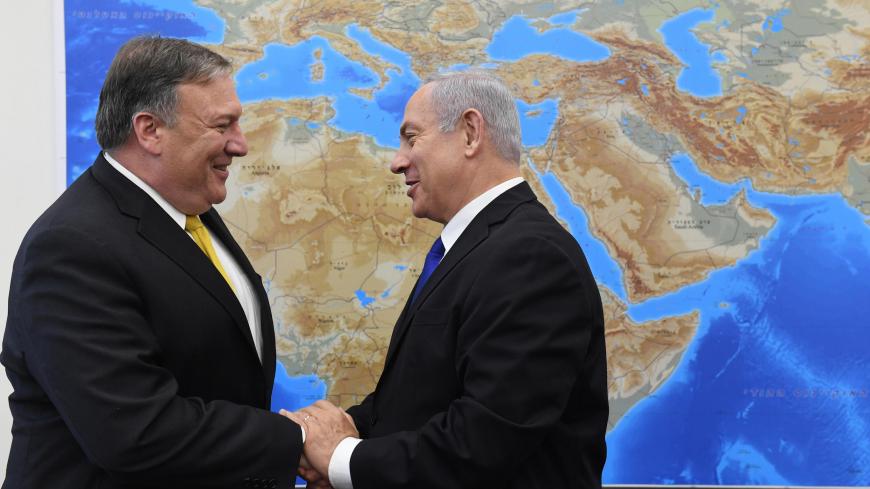 The alleged visit was first reported early this morning, after a tweet by Haaretz editor Avi Scharf about a mysterious private jet flying from Tel Aviv to the Saudi city of Neom. "ABSOLUTELY rare Israeli flight direct to new Saudi mega-city Neom on Red Sea shore It was Bibi's ex-fav bizjet t7-cpx. Back to Tel Aviv after 5 hours on ground," read the tweet, which also featured the flight's route.

After the tweet, anonymous Israeli officials confirmed that Netanyahu had visited Saudi Arabia. They said he was accompanied by Mossad chief Yossi Cohen, that Netanyahu met in Saudi Arabia with Crown Prince Mohammed bin Salman and that US Secretary of State Mike Pompeo, currently visiting the county, was also present at the meeting, which lasted between two and four hours. The sources further claimed that bin Salman had no objection to the meeting being disclosed. Later in the day Saudi officials confirmed the meeting to the Wall Street Journal.

In between, Education Minister Yoav Gallant also confirmed the visit. Speaking to Army Radio, Galant said, “I congratulate the prime minister on this amazing achievement. The fact that the meeting took place and was made public — even if it was in only a semiofficial way — is something of great importance.”

Further reports stated that the meeting focused on the Iranian threat and the potential for normalizing ties between Jerusalem and Riyadh. No substantive normalization agreements were reached.

Defense Minister Benny Gantz criticized the leaked news of the alleged meeting, saying the publications were irresponsible. "That’s not the way I behave, and you can imagine that I have done a thing or two that were secret during my life, including as envoy of Netanyahu. I never acted this way and I will never act this way. I think Israeli citizens should be concerned over this," he said.

Speaking at his weekly Likud meeting, Netanyahu said in reaction to Gantz’ statement, "Over the years I have never addressed such things and I am not about to start doing it now. I can only say that throughout my years as prime minister of Israel, I did all that I could for Israel’s security and for enlarging the circle of peace."

Netanyahu warned yesterday against renewing the nuclear agreement with Iran in what seemed to be a message directed at US President-elect Joe Biden. “We will not allow Iran to get nuclear weapons. There can be no going back to the previous nuclear agreement. We must stick to an uncompromising policy of ensuring that Iran will not develop nuclear weapons,” he said.