The decision by Defense Minister Benny Gantz to open an inquiry into the submarine affair, and Prime Minister Benjamin Netanyahu excluding Gantz on the trip to Saudi Arabia, brings the political crisis to an unprecedented point. 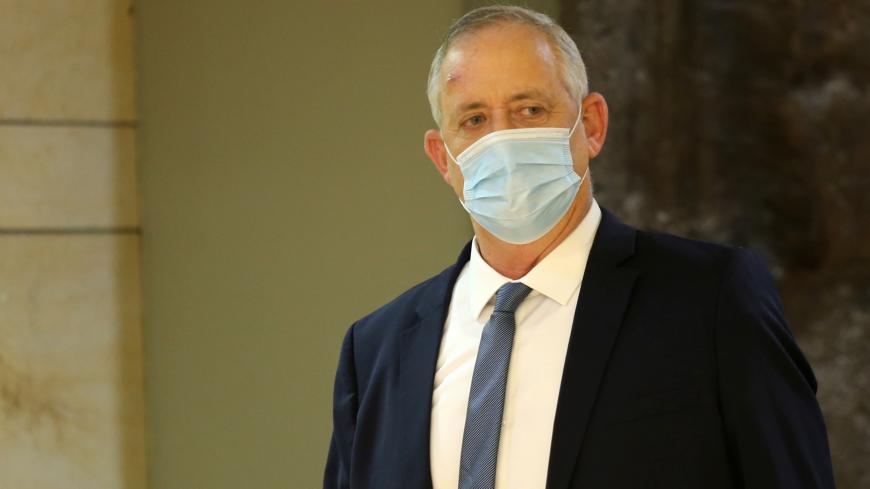 Israeli Alternate Prime Minister Benny Gantz arrives to attend a meeting at the Knesset in Jerusalem on Oct. 15, 2020. - ALEX KOLOMIENSKY/POOL/AFP via Getty Images

“The state is on the backburner today because [Prime Minister Benjamin] Netanyahu is busy with other issues. Netanyahu thinks first and foremost about his trial. Yalla (Let’s go) Fauda!” That was the main headline of Monday’s edition of Yedioth Ahronot. It was a direct quote from Minister of Defense and Alternate Prime Minister Benny Gantz.

It was not by chance that the former chief of staff chose to use the term “Fauda” — Arabic for "chaos" and the name of the most successful Israeli TV series in the world. “Fauda” was the code word used by the Israel Defense Force’s Mista’arvim unit (the undercover counterterrorism unit) operating in the West Bank when locals discovered them. At the advice of his media consultants, Gantz used the term in an attempt to show a more aggressive attitude toward Netanyahu, believing that this might help him win back voters who abandoned him for joining forces with Netanyahu in the first place.

Even if it was just a tactical measure, targeting the media, the very fact that the defense minister would say something that harsh about the prime minister and compare their work together to a deadly battlefield is anything but normal. In this case, “Fauda” was Gantz’s political declaration of war and a signal that he has come to accept the idea that a new election is inevitable. All signs seem to indicate that Israel will be headed to a fourth round of elections this March and that nothing short of a miracle could prevent this from happening.

A closer look at the lives of Gantz and Netanyahu during the first two days of this week offers a dismal picture of how the government is functioning. More than that, it shows that there is an unprecedented crisis in the country’s leadership. Nothing like that has ever happened before.

It all started on Nov. 21. Suddenly, without any prior warning, the Prime Minister’s Office announced that the Coronavirus Cabinet’s meeting, scheduled for Sunday to decide on lifting certain restrictions, had been postponed by a day. The reason given for this was that the participating ministers had not finished their preparations for that meeting.

At noon on Nov. 22, the country’s leadership flew to Kibbutz Sdeh Boker for the annual memorial service for Israel’s first prime minister, David Ben Gurion. At the end of the ceremony, Gantz went to Netanyahu and asked to have a few words with him in private. It was later learned that he informed Netanyahu of his decision to have the Defense Ministry create an inquiry committee to look into the submarine scandal.

With this volatile information in hand, Netanyahu returned to Jerusalem to make his final preparations for his secret trip to Saudi Arabia for a meeting with Prince Mohammed bin Salman. Netanyahu never informed Gantz about the meeting, even though they had a few moments together in private. He never even hinted at his trip or insinuated that there may be another reason why he decided to postpone the Coronavirus Cabinet’s meeting. It was later learned that Netanyahu kept this sensitive trip a secret from Foreign Minister Gabi Ashkenazi and the chief of staff as well, allegedly so as to limit the number of people who were in on it. That way, he believed, he could keep the information from reaching the defense minister. It is no secret that Netanyahu does not trust the two former chiefs of staff Gantz and Ashkenazi. Time and again, he chooses to exclude them from diplomatic and security affairs.

Soon after Netanyahu returned to Jerusalem, the press announced the creation of the inquiry committee, to be headed by a judge. This immediately set off a political hubbub. Such a committee would have enormous political and public implications. While it would not be authorized to subpoena witnesses or determine people’s fates, it would, to put it mildly, place Netanyahu in an uncomfortable position in the public’s eye. Suspicions that the prime minister has somehow been involved in the criminal aspects of the submarine affair have been hanging over Netanyahu for years. It doesn’t matter that the state attorney general released a detailed report just a month ago that there was no reasonable cause to justify an investigation into the prime minister's involvement in the case.

By now, Gantz realizes that Netanyahu has no plans to keep the unity government agreement between them. A new election is on the horizon under difficult circumstances, with a party — Blue and White — that has been torn apart and is collapsing in the polls. That is why he decided to strike out at the prime minister’s Achilles’ heel by bringing up the submarine affair. Even if an investigation is justified, there can be no doubt that this was a political decision made in a state of distress. Similarly, the fact that Gantz limited the time for the committee to conclude its investigation to four months — i.e., when the next election will likely be held — is further evidence of what really lies behind his decision.

Gantz had dropped a bombshell, but to the surprise of the Likud’s ministers, Netanyahu was nowhere to be found. It was only the next morning that the country learned that Netanyahu boarded an executive jet that same evening and flown to the Saudi coastal town of Neom, about 90 minutes from Israel. Four hours later he flew back to Israel. He appeared in the Knesset the following day.

It was the morning after a sleepless night that Netanyahu saw the dramatic headline in Yedioth Ahronot. Just a few hours later, online news sites started reporting about his historic meeting in Saudi Arabia. Since the story was not censored, it can be assumed that Netanyahu approved it. His quick jaunt to Saudi Arabia for a meeting with Salman and US Secretary of State Mike Pompeo had enormous political value for him, especially on a day like this. It was more than just spin. There was a much bigger message behind it. Netanyahu could use it to present himself as a statesman par excellence, while Gantz is allegedly busy focused on minor political squabbles.

The response was quick in coming. Gantz took advantage of the photo op at the start of his faction’s meeting to attack Netanyahu, saying that leaking news of the secret flight to Saudi Arabia was irresponsible and adding, “I think Israeli citizens should be concerned over this.”

The subtext of his remarks was that Netanyahu poses a danger to national security. Just one hour later, Netanyahu opened a meeting of his own Likud faction by calling Gantz’s decision to form a committee of investigation “a big disgrace.” As he explained it: “Never has a minister of defense exploited the IDF as callously as Gantz is doing now. I hope that Gantz will come to his senses after this ‘Fauda’ and start working together with me again. That is what the people of Israel expect from us.”

The prime minister and the alternate prime minister continued to squabble during the Coronavirus Cabinet meeting, right in front of all the other ministers. Gantz arrived at the meeting ready to fight. Netanyahu seemed indifferent to it.

Gantz’s strategy seems to be to go on offense and take a more aggressive approach to Netanyahu. This is supposed to win back those voters who abandoned him for his former partner Yair Lapid or Yamina Chairman Naftali Bennett. But he is facing off against the mega-politician Benjamin Netanyahu, who is goading Gantz to escalate. That way, Netanyahu can blame him for tearing the emergency government apart. Over the last few weeks, Netanyahu has started to recover in the recent polls, but he is still far from his record 40 seats. Furthermore, negative feelings toward him have only gotten stronger over the last few months. Given these circumstances, even a fourth round of elections doesn’t look like it would lead to a decisive outcome.