Israel and Bahrain's foreign ministers met in Israel today as ties between the two countries warm at a rapid pace. 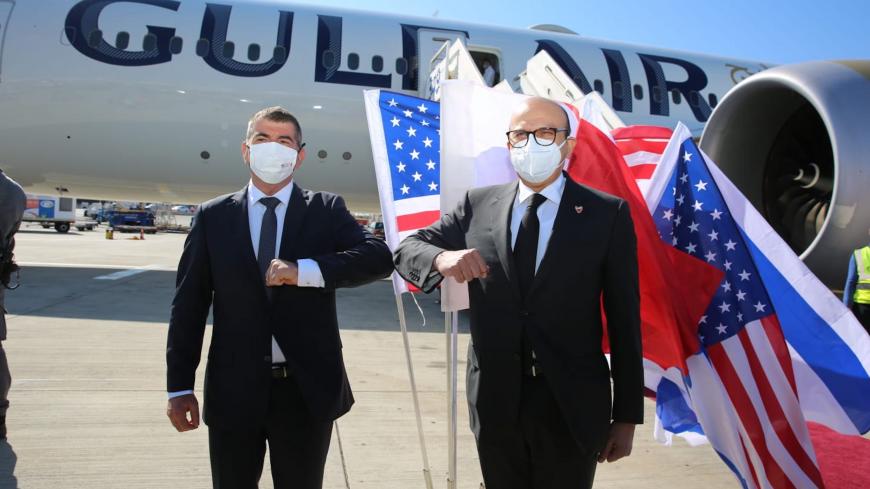 Foreign Minister Gabi Ashkenazi said today he hopes that mutual Israeli and Bahraini embassies will be inaugurated by the end of the year. Ashkenazi also announced that as of Dec. 1, Bahraini citizens will be able to apply online for a visa to visit Israel, noting that direct flights between the two countries will begin soon.

Gulf Air flight GF972 from Manama to Tel Aviv landed at the Ben Gurion airport at 10:30 a.m. local time. It was the first commercial non-stop flight between the two countries and the first ministerial visit from Bahrain to Israel. Bahraini Foreign Minister Abdullatif bin Rashid Al Zayani lead a large official delegation including a deputy foreign minister, the head of Bahrain’s civil aviation and some journalists. He was also accompanied by a senior US delegation headed by the outgoing administration’s Middle East envoy Avi Berkowitz. Honoring both senior guests upon landing, Israeli, Bahrain and American flags were posted on the tarmac, alongside a red carpet.

Ashkenazi tweeted in the early morning in both English and Arabic, "This is a good morning indeed. Will be shortly on my way to the airport to welcome my friends and partners." Welcoming Zayani at the airport, the Israeli minister told him that the whole country was excited for the “historic visit." He then tweeted, "I am looking forward to our discussions today and to the new era of peace, security and stability in the region that this visit marks."

At a joint press conference with Zayani, Ashkenazi warmly greeted his counterpart on his first visit to Israel, welcoming him with "Salaam alaikum, my friend."

"The whole region has undergone huge positive changes in the last few months and your visit here today is a symbol of the peace that all of Israel has dreamed of. We have been speaking for a couple of months now and have become close friends. It is an exciting moment to meet a friend for the first time face to face. But we are more than friends. We are also partners that share a vision, a goal and a commitment," said Ashkenazi.

The Israeli minister welcomed the news yesterday that the Palestinians were resuming security cooperation with Israel, stating, "Our door is open to renew negotiations and I urge the Palestinians to step through this door with no preconditions."

The Bahraini minister said at the press conference that he and Ashkenazi discussed a range of bilateral issues on which the two countries can work together as well as the importance of regional stability and combatting terrorism. Zayani said they are exploring ways to consolidate the benefits of the Abraham Accords on the regional and international levels, adding, "In this context, I extended an invitation for the foreign minister to join us next month for the Manama Dialogue meeting."

On Oct. 18, the Israeli Foreign Ministry's director Alon Ushpiz headed an official delegation to Manama, where it signed eight bilateral agreements. The first was a joint communique on the establishment of diplomatic, peaceful and friendly relations. The other seven agreements dealt with bilateral cooperation in civil aviation, communications, cooperation between financial institutions, agriculture, technology, cooperation between the foreign ministries and visa-exempt status for diplomats. The Israeli delegation formally asked to be allowed to open an embassy in the country and preparations are now officially in the works to do so.

Alon Ushpiz told Army Radio this morning, "We will advance today on the implementation of the 8 agreements we had signed. We will deal with the agreements on aviation, procedures for visas and the establishment of embassies."

This evening, Zayani is set to hold a trilateral meeting in Jerusalem with Prime Minister Benjamin Netanyahu and US Secretary of State Mike Pompeo, who is arriving in Israel today for a three-day visit.