Israel, Bahrain establish diplomatic relations at a ceremony in Manama 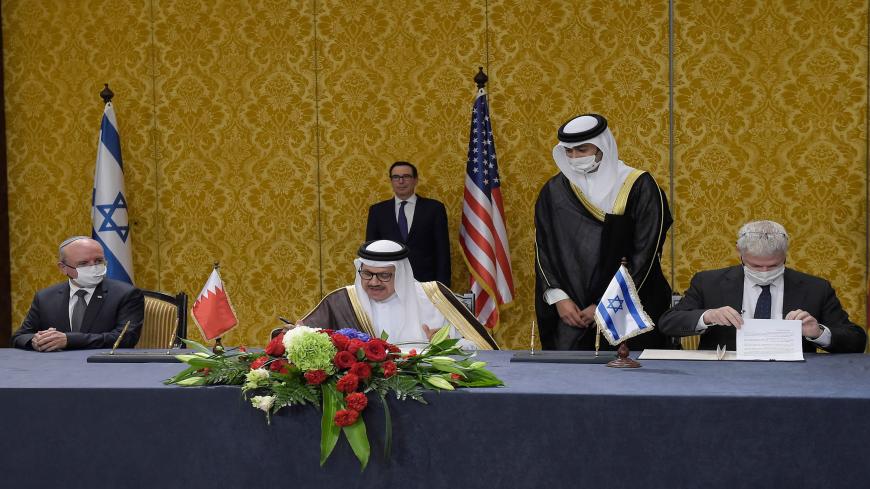 Israel and Bahrain announced Oct. 18 that they have made peace and established formal diplomatic relations. The ceremony took place in Manama, the capital of Bahrain, where officials from both sides signed eight bilateral agreements. These included a joint communique on the establishment of diplomatic, peaceful and friendly relations, which was signed by Israel’s Foreign Ministry Director General Alon Ushpiz and Bahraini Foreign Minister Abdullatif bin Rashid Al Zayani. US Treasury Secretary Steven Mnuchin represented the Trump administration at the ceremony.

Reportedly, the joint communique contains a promise by both countries not to take hostile action against each other. It does not include any reference to the Israeli-Palestinian issue. Still, Zayani said in his speech at the ceremony, “The Palestinian question must be solved through direct negotiations between the two sides to reach a solution that satisfies both parties and brings about a two-state solution, according to the principles of the Arab Peace Initiative and the relevant international law."

Related: Check out Ben Caspit's interview with Ushpiz in the latest episode of On Israel podcast

The document is not legally a treaty, but rather a “framework agreement,” as Israeli officials put it. However, the signatures of both Israel and Bahrain mean that diplomatic relations have been formally established.

The delegation of senior Israeli officials arrived in Manama on the morning of Oct. 18, on board El Al flight 973, the first Israeli commercial flight to the country. Expressing Israeli enthusiasm, Ushpiz tweeted before departing from Ben Gurion Airport, "A historic day as we head to Bahrain with our American allies, to promote peace and prosperity for Israel, Bahrain and the entire region." The delegation returned to Israel this morning.

Shortly before the ceremony, Prime Minister Benjamin Netanyahu spoke on the phone with Zayani and Mnuchin, praising the agreement as a "giant step" toward peace.

Foreign Minister Gabi Ashkenazi hailed the Israeli-Bahrain agreement for establishing the foundations for true peace. "This is a great moment for all of us, and very moving for me personaly. I’d like to thank the Bahraini foreign minister and the American administration for their extraordinary contribution to this enormous achievement,’’ tweeted Ashkenazi. Later in the day, he issued to his counterpart a formal request to open an Israeli Embassy in Manama.

This morning, in another first, a commercial flight of Emirates’ Etihad Airlines from Abu Dhabi to Tel Aviv landed at Ben Gurion Airport. The Emirati delegation will discuss the practical implementation of the normalization agreement, including Arab tourism to Israel and Jerusalem. Israel’s Transportation Ministry stated Oct. 18 that the two countries will sign an agreement Oct. 20 to allow 28 weekly commercial flights between Ben Gurion Airport, Dubai and Abu Dhabi.