While Iraqi leaders and officials have welcomed a Biden presidency, there are worries about what direction US policy will take when it comes to Baghdad. 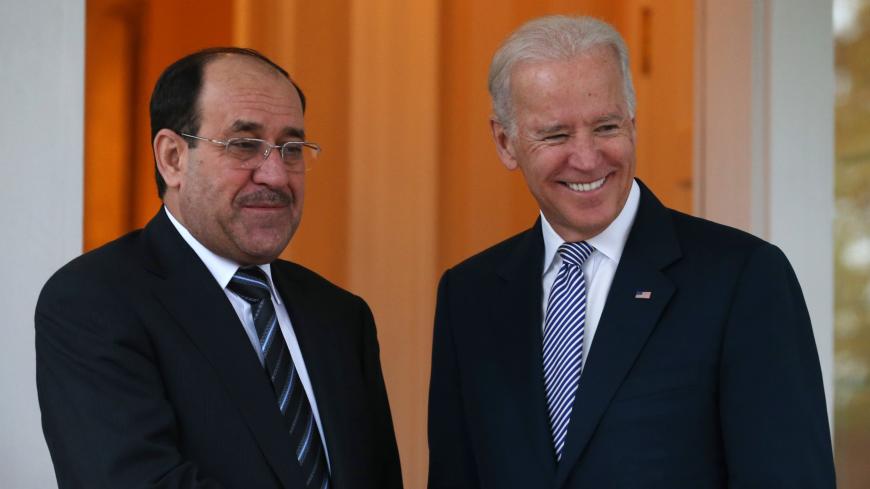 Nouri al-Maliki is one of many leading Iraqi political figures who have congratulated Joe Biden on his election to the US presidency. Here, on Oct. 30, 2013, when Biden was vice president and Maliki was prime minister, they greet each other at the Naval Observatory in Washington. - Mark Wilson/Getty Images

Top Iraqi officials and other leaders were quick to congratulate President-elect Joe Biden on his electoral win, expressing hope that Iraq's ties with the United States will remain strong and even improve.

Iraqi President Barham Salih tweeted a message to Biden on Nov. 7, calling him a “friend and trusted partner in the cause of building a better Iraq.” Salih added, “We look forward to working to achieve our common goals and strengthening peace and stability in the entire Middle East."

Iraqi Prime Minister Mustafa al-Kadhimi expressed a desire to work with the US president-elect “on strengthening the strategic ties that bind Iraq and the United States, building on common values between our nations to overcome challenges together."

Other Iraqi officials, including the parliament speaker and Kurdistan Regional Government leaders, sent similar messages, expressing hope for better partnership and cooperation between the two countries under Biden's leadership.

In addition, the head of the pro-Iran State of Law coalition, Nouri al-Maliki — who was prime minister during much of the presidency of Barack Obama and the latter part of George W. Bush's — congratulated Biden on his win.

Iraqi public opinion, however, was mixed. Some Iraqis view Biden's victory as a positive change for Iraq while others see it as a negative event that could throw Iraq into greater crisis.

In general, there have been three main lines of reaction among Iraqi politicians about Biden's victory — pleasure with President Donald Trump's departure, worry that Biden will repeat the errors of Obama and worry that Biden would return to an idea he once had to divide Iraq along partisan lines.

Political parties and military factions close to Iran have expressed happiness at Trump's removal from the White House because of his harsh policies against Iran, how he pressured Iraq to distance itself from Iran and how he continuously targeted Iranian proxies in Iraq.

Mohammed Mohie, a spokesman for Kataib Hezbollah — the most extreme pro-Iran militia — said, “President Trump's era is a dark era, and today there is an opportunity for the new administration to reform what Trump has ruined, restore the US relationship with the world and rearrange its situation in Iraq in particular, because there is a public requirement to end the illegal US military presence in Iraq.”

“Donald Trump may commit foolishness during this period, acting against the cease-fire by resuming targeting any party associated with the PMU [Popular Mobilization Units], which would lead us to target American forces in Iraq again,” Mohie warned.

Militias' accounts on social media such as Sabereen News on Telegram have been reporting on US military activity in Iraq, threatening to resume their military campaign against US forces soon.

The militias have stopped targeting US bases and convoys following a meeting between UN representative Jeanine Hennis-Plasschaert and PMU chief of staff Abu Fadak Mohammadawi. However, the militias have constantly said the cease-fire is temporary.

On the other hand, the anti-Iran front in Iraq began expressing concern about a Biden presidency long time before the elections. A Biden administration evokes the Obama presidency (in which Biden was vice president), which withdrew all US troops from Iraq. Iran deepened its ties with Iraq in part as a result; also, in 2014 the Islamic State overran large parts of the country.

"We do not want Obama's policies to return to our country again," said Dhafer al-Ani, the deputy head of the Foreign Relations Committee in the parliament and a member of the secular Iraqia bloc.

The third reaction was concern about Biden's previous proposal to divide Iraq along sectarian lines. In 2006, Biden co-wrote an article in The New York Times promoting the idea for Iraq to have Kurdish, Sunni and Shiite autonomous regions as a solution to sectarian conflicts.

The Biden plan received many negative reactions at the time.

The Kurdistan Regional Government has been disappointed with Trump's non-support of Kurdistan's independence referendum in 2017 and his administration's silence, if not support, of Baghdad's actions to recapture disputed areas after the referendum, the results of which were widely rejected outside Kurdistan.

Arab Sunnis who were in favor of a united Iraq and even against federalization have a different view now following the long sectarian conflict and the war against the Islamic State and pressure from PMU factions in their areas.

It appears that politicians are expecting a new US Iraq policy from Biden, but wondering what it s policy will be. Might it be a return to one similar to Obama's, a mixture of Obama and Trump policy or something completely different from the past? And will Iraq be a priority, or a secondary, issue for the new administration?