Egyptian man in Cairo's Tahrir Square sets himself on fire

The incident took place at the rallying point for Egypt's 2011 revolution. 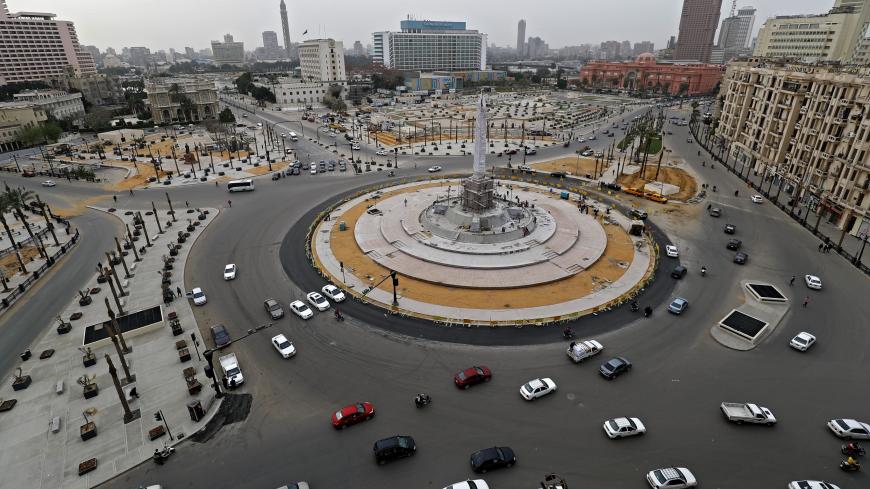 Cars drive in Cairo's Tahrir square shortly before the first day of a nighttime curfew imposed by authorities to try to contain the spread of the coronavirus on March 25, 2020. - KHALED DESOUKI/AFP via Getty Images

A video has gone viral in Egypt that shows a man setting himself on fire Thursday in Cairo’s Tahrir Square, the rallying point of the country’s 2011 uprising.

According to Al Jazeera, the man in the video is first seen filming himself and complaining of government corruption. Drenched in kerosene, he then lights himself on fire before onlookers run over to put it out.

The man is reportedly being treated for his burns at a Cairo hospital. Citing a source from Cairo’s security directorate, Reuters reports that the man told officials at the hospital that he worked at Egypt’s Central Auditing Organization.

In a similar incident last week, a Syrian refugee in Beirut was hospitalized after setting himself on fire outside the United Nations refugee agency’s reception center in the Lebanese capital. The 58-year-old man reportedly did so because he couldn’t afford to pay for his sick daughter’s medical treatment.

Suicides by fire have become more common in the Middle East since a Tunisian street vendor’s self-immolation in December 2010 sparked mass protests in the North African country and led to uprisings across the region.

Egypt’s own Arab Spring protests were centered in Tahrir Square, where Thursday’s incident took place. The country’s current president, Abdel Fattah al-Sisi, has faced widespread criticism for cracking down on peaceful protests and has detained thousands of political opponents since taking power in a 2013 coup.