The emails purportedly sent by the pro-Trump Proud Boys group were actually an Iranian operation, according to US intelligence, though Iran has denied the allegation. 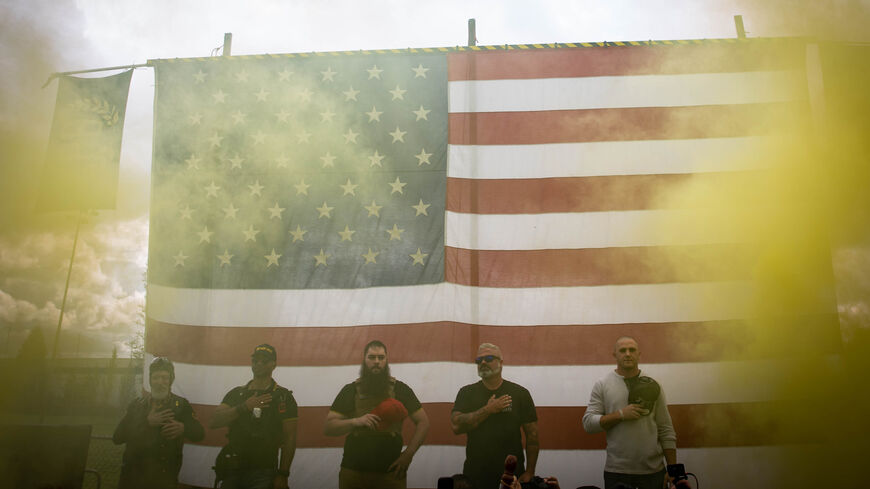 Yellow smoke fills the air as an American flag is raised at the start of a rally by the far-right group "Proud Boys" at Delta Park in Portland, Oregon on Sept. 26, 2020. - MARANIE R. STAAB/AFP via Getty Images

The US government said on Wednesday that Iran was behind fake emails sent to intimate American voters ahead of the Nov. 3 presidential election.

As early as Tuesday, some voters in the election battleground state of Florida received threatening emails purportedly from the far-right Proud Boys group, which is known for clashing with Black Lives Matter protesters. The emails, which targeted Democrats, threatened people if they did not register as Republicans and vote for Trump. The senders claimed to have the recipients’ voter registration information, according to The Gainesville Sun.

On Wednesday, US Director of National Intelligence John Ratcliffe said the government has “already seen Iran sending spoofed emails designed to intimidate voters” in reference to the emails. He also said that both Iran and Russia have obtained US voter information, Reuters reported. The Proud Boys also denied sending the emails.

Iran quickly dismissed the US government’s statement. The Islamic Republic summoned the Swiss ambassador on Thursday to protest what it called “fabricated, amateurish and deceitful reports from the US regime’s officials,” the state-run Tasnim News Agency reported. Switzerland represents the United States in Iran because Iran and the United States lack formal diplomatic relations.

Iran is sticking to the original story. Also on Thursday, the state-run Press TV published an article that attributed the emails to the Proud Boys. The apparent Iranian operation was successful in that it temporarily convinced some Trump critics that the Proud Boys were engaging in voter intimidation.

This is not the first time the US government has accused Iran of meddling in the 2020 election. Earlier this month, Twitter closed accounts it said originated in Iran that were tweeting about the first presidential debate, based on information provided by the FBI. Other social media platforms have taken similar actions against Iranian information operations.