How much damage can Arab states do to Turkish economy?

As Turkey’s Arab adversaries step up efforts to counter Ankara’s actions in the Middle East, Saudi Arabia has reportedly started a covert boycott of Turkish goods. 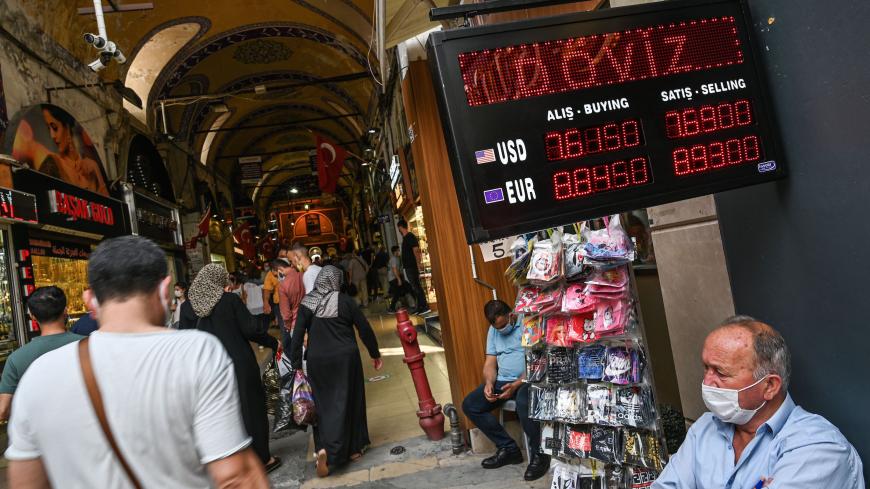 People walk past a screen showing rates at a currency exchange agency near Grand bazaar, in Istanbul, on Sept. 24, 2020. - OZAN KOSE/AFP via Getty Images

Turkey’s ailing economy, hit by the COVID-19 pandemic atop severe currency woes since 2018, is now facing economic reprisals by Arab countries incensed with Ankara’s policies in the Middle East. Saudi Arabia has already started an undeclared boycott of Turkish goods, according to Turkish exporters, amid rising Arab calls for economic retaliation against Turkey.

Egypt has been at the forefront of efforts to create a united Arab stance against Turkey, most recently at the Sept. 9 meeting of the Arab League. Whether Arab nations can mount an efficient joint action against Turkey is a question on its own, but the Turkish economy today is too vulnerable to dismiss or absorb large-scale reprisals.

Turkey’s economic ties with Arab nations have grown in the past two decades, both in terms of trade and inflows of investment and tourism. Arab nations, however, remain far from being Turkey’s top economic partners. Retaliatory actions would have had a limited impact on the Turkish economy in normal times, but an efficient Arab boycott coming on top of Turkey’s existing economic woes could well prove hurtful. Amid the dramatic slump of the Turkish lira and an exodus of foreign investors, the Turkish economy can ill afford any fresh losses in hard-currency earnings, foreign capital flows and reputation and therefore a further increase in its risk premium.

In their Sept. 9 statement, Arab League foreign ministers denounced Turkey’s “interference in Arab affairs,” including its military actions in Syria, Libya and Iraq, and urged Ankara to “stop provocations that could erode building trust and threaten the region’s security and stability.” Egyptian Foreign Minister Sameh Shoukry called for Arab unity to deter Turkey’s actions, which he described as the most significant emerging threat to Arab national security. Libya, Qatar, Somalia and Djibouti conveyed reservations about the joint statement, which also welcomed the formation of a committee to monitor and address such Turkish interference. Ankara dismissed the accusations, saying that the decisions made at the meeting “lack any context to be taken seriously.”

Saudi Arabia appears to be already boycotting Turkish goods. In a Sept. 28 report, the Turkish daily Sozcu quoted business people as saying that their Saudi partners had notified them to stop shipping goods because the Saudi authorities were blocking the entry of imports from Turkey. The report follows Turkish complaints earlier this year that the Saudi authorities had been holding up trucks carrying fresh fruits and vegetables at the border and pressing local traders to stop doing business with Turkey.

According to Mehmet Guzelmansur, a lawmaker for the main opposition Republican People’s Party who represents the southern border province of Hatay, Saudi obstruction has already caused “very serious material losses” to farmers and exporters in Hatay and surrounding regions. “If the problem remains unresolved, a full embargo by Saudi Arabia could expand [through similar moves by] Saudi allies such as Dubai, Bahrain and Oman,” he warned.

Turkish exports have already declined this year. In the first seven months, they stood at some $90 billion, decreasing 13.7% from the same period last year, according to the Turkish Statistical Institute. Exports to Arab-majority countries were worth $17 billion or about 19% of the total. In 2019, Arab countries bought Turkish goods worth some $36 billion, accounting for a fifth of Turkey’s $180 billion exports.

Neighboring Iraq is the top Arab buyer of Turkish goods. Sales to Iraq were worth $10.2 billion last year, representing 28% of Turkish exports to Arab countries. Trailing behind are the United Arab Emirates with 10%, Egypt with 9.7% and Saudi Arabia with 9.2%. Exports to those four countries totaled $21 billion last year, while Qatar, Turkey’s chief regional ally, bought only $1.2 billion in Turkish goods.

Turkey’s imports from Arab countries, meanwhile, totaled $14 billion in 2019, accounting for 6.7% of all imports. This makes Turkey a net exporter in the Arab world, with its exports exceeding imports by $22 billion, underscoring the importance of Arab markets for Turkish exporters.

Turkish direct investments in Arab countries, meanwhile, are worth $2.4 billion, with half of them in Algeria. Thus, Arab countries are net capital exporters by a large margin vis-à-vis Turkey, but with Qatar dominating those investments, the UAE is the only country that could threaten any real blow in this field.

Foreign investments in the Turkish stock market amounted to $24 billion in July, while Turkish debt to foreign lenders stood at $390 billion. The Central Bank does not provide a breakdown by countries in this category, but Arab entities are certainly involved, directly or indirectly.

When it comes to Turkey’s tourism sector, the clout of Arabs remains limited. Arab nationals represented 10% of foreigners visiting Turkey in the first eight months of the year, which saw a huge downturn in tourism due to the pandemic, with the number of foreign visitors plunging 77% to some 7 million. In 2019, visitors from Arab countries still accounted for 10% of some 45 million foreigners visiting Turkey. Iraqis topped the list, followed by Saudi, Jordanian, Lebanese and Kuwaiti nationals.

All in all, Turkey’s economic ties remain focused on the West, mostly Europe, and a collective boycott by Arab countries appears a distant prospect due to their own divisions. Still, Turkey can hardly afford any losses in Arab markets or Arab investments at present, given its ongoing economic turmoil and hard-currency crunch.