Syrian opposition fears being left behind again after US election

Many leaders of the Syrian opposition prefer Donald Trump, who used military force twice against the Syrian government, over Joe Biden, who served in an administration they believe turned a blind eye to the Iranian presence in Syria and allowed the regime to use chemical weapons. 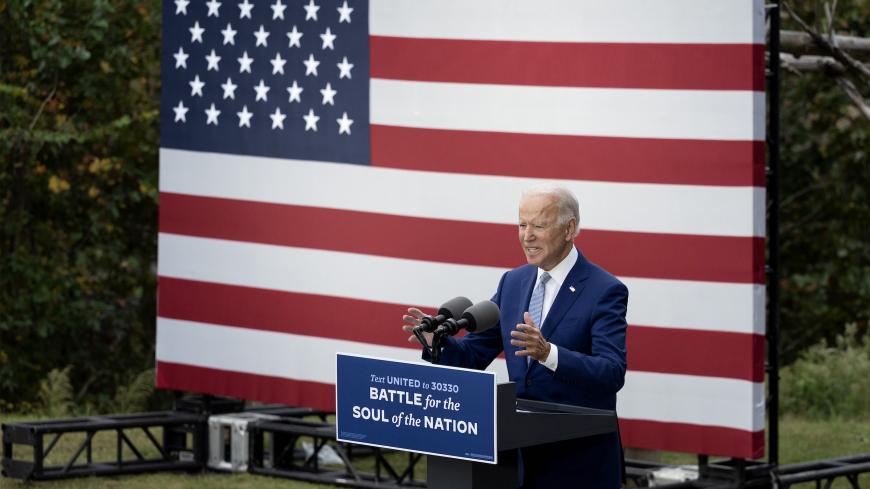 The Syrian opposition is closely following the US elections to be held Nov. 3 that will determine if current President Donald Trump will remain in the White House or if Democratic candidate and former Vice President Joe Biden will replace him.

The newspaper quoted Biden’s foreign policy adviser, Tony Blinken, as saying, “We failed in preventing a tragic loss of life as well as millions of people made into refugees or internally displaced. This is one of the things that we are looking hard at, and then, if we are given the responsibility, it’s something we will need to act on.”

Samir Nashr, a political leader in the Syrian opposition who currently resides in Turkey and a former member of the National Coalition for Syrian Revolutionary and Opposition Forces, told Al-Monitor, “The US elections are seen by the majority of the Syrian opposition as an important milestone and a potential breakthrough in determining the direction of US policy in the region, and in Syria specifically. The US has been the only superpower in the world whose stances determine other countries' positions on the Syrian revolution and the directions of the political solution in Syria, and thus whether [President] Bashar al-Assad will leave or stay in power.”

He added, “The future of millions of Syrians in Syria and that of millions of Syrian refugees in neighboring countries in particular will be determined by the results of these elections. Of course, the majority of the Syrian opposition would rather have Trump be re-elected instead of Biden coming to power. They believe, and so do I, that the Trump administration stands more firmly against the Syrian regime and its supporters when it comes to acts of killing, bombing and destruction, especially regarding the Syrian regime’s use of internationally banned chemical weapons. Contrary to the Obama administration, which turned a blind eye to the Syrian regime’s use of chemical weapons in Ghouta on Aug. 21, 2013, killing over 1,400 civilians, most of whom were women and children.”

Nashr noted, “Meanwhile, the Trump administration responded to the regime’s chemical attack in Khan Sheikhoun [in April 2017], not to mention the attacks the US forces carried out against the regime’s forces, Iranian militias and the Wagner militia when they tried to cross the Euphrates River on Feb. 7, 2018, killing more than 200 of them. In addition, the US imposed the Caesar Act, which includes severe penalties on the regime and the countries supporting it. The Syrian regime has thus been facing a slow death, from which it can only escape by implementing the political solution stipulated in [UN] Resolution 2254. The Trump administration has prevented political normalization between the regime and some countries.”

Nashr said the majority of Syrians are rooting for Trump due to a fundamental disagreement about Biden and his policy toward Iran, the main supporter of the Syrian regime, as well as the nuclear agreement the Obama administration signed with Iran in 2015, which the Trump administration canceled and replaced with harsh sanctions.

Radwan Ziadeh, a supporter of the Syrian political opposition residing in the United States, told Al-Monitor, “The Syrian opposition is divided but most support Trump, as they fear Biden's victory could bring back Obama's policies in Syria. However, Trump has failed regarding the Syrian issue; it was not a priority in his foreign policy, despite what he did against the regime, such as the Caesar Act. The Syrian opposition in general hopes that if Biden wins, he will make the Syrian issue an important priority in his foreign policy.”

Alaa al-Din Ayyub, aka Faruq Abu Bakr, a leader in the Mutasim Division affiliated with the Free Syrian Army, told Al-Monitor from his home in the northern countryside of Aleppo, “The Syrian opposition is patiently waiting for the US elections because they will affect the Syrian file one way or another. The Syrian opposition in Washington is currently working to express its point of view on Syria to the Trump and Biden teams. The Syrian opposition clearly prefers Trump to Biden, given the latter’s statements regarding the Iranian file, especially when he declared that he wants to be open to the Iranians — everyone knows the terrorist role that Iran has played in Syria. Syrians fear Biden could help Iran regain a foothold in the region.”

Ayyub added, “Biden's statements regarding Turkey and his support to the Turkish opposition also raised the Syrians’ concerns as it is well known that the Turkish opposition is against the Syrian revolution and intends to restore relations with the regime and expel the Syrians from Turkey if the opposition comes to power. One could say that Trump was at least able to stop Iran's expansion in the region and prevent it from controlling new areas. It's true that he did not completely expel it from the region, but he dealt it harsh blows by preventing its incursion into the region, not to mention targeting many of its leaders, including the killing of [Iranian commander] Qasem Soleimani."