More than two dozen Saudis are named in the lawsuit seeking accountability for Jamal Khashoggi's "ruthless torture and murder." 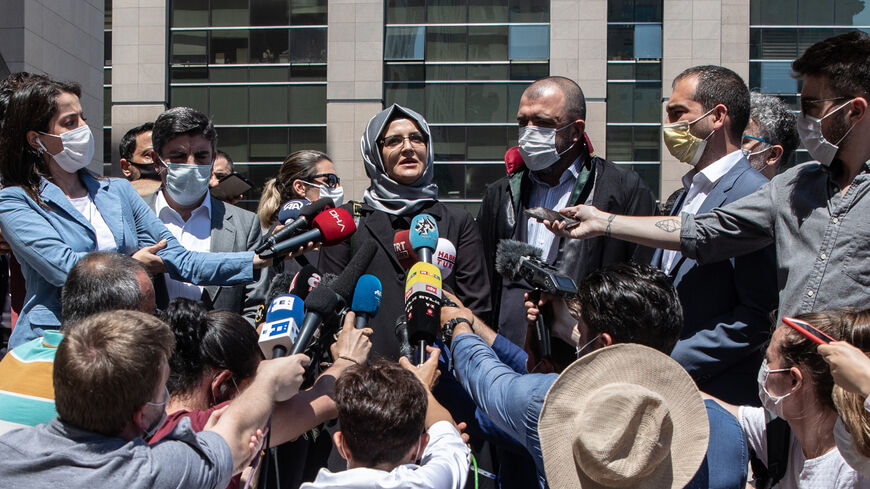 Hatice Cengiz, the fiancee of murdered Washington Post journalist Jamal Khashoggi, speaks to the press after the first session of the murder trial outside the Caglayan Courthouse on July 3, 2020, in Istanbul, Turkey. - Chris McGrath/Getty Images

The Turkish fiancee of Jamal Khashoggi has filed a civil lawsuit in Washington, DC, against Saudi Arabia’s Crown Prince Mohammed bin Salman and other Saudi officials alleged to have played a role in the journalist’s murder two years ago.

The suit was filed in the US District Court for the District of Columbia jointly by Hatice Cengiz and her late fiance's Washington-based advocacy organization, Democracy for the Arab World Now (DAWN). They are seeking punitive damages for Khashoggi’s “ruthless torture and murder.”

“I am hopeful that we can achieve truth and justice for Jamal through this lawsuit,” Cengiz said in a statement. “I place my trust in the American civil justice system to give voice to what happened and hold those who did this accountable for their actions.”

On Oct. 2, 2018, Khashoggi walked into the Saudi Consulate in Istanbul to pick up paperwork needed to marry Cengiz. Once inside, Turkish officials say a 15-man Saudi hit squad killed and dismembered Khashoggi, whose remains were never located or returned.

The complaint alleges the co-defendants “manufactured an opportunity” to murder Khashoggi by luring him to the consulate in Turkey “under a ruse that Turkey was the sole place he could obtain the documents he sought.”

The suit names more than two dozen Saudis who saw Khashoggi’s actions “as an existential threat,” including alleged members of the hit team that killed Khashoggi while Cengiz waited outside the consulate. The complaint accuses the kingdom's de facto leader, bin Salman, of ordering the murder.

The CIA concluded that the crown prince ordered Khashoggi’s assassination and a separate UN investigation found the killing was “overseen, planned and endorsed by high-level officials.”

The Saudi government insists the journalist was killed in a “rogue” operation without the royal's direct knowledge.

The complaint alleges that the plan to kill Khashoggi was put in motion no later than the summer of 2018 after Saudi officials hacked the cell phones of Khashoggi’s associates and discovered that the journalist was preparing to launch DAWN, a watchdog to promote human rights in the Arab world.

The plaintiffs’ lawyers say adequate remedies for justice are not available in Saudi Arabia or Turkey. In September, a Saudi court sentenced eight unnamed defendants to prison in a closed-door trial that Cengiz called “a complete mockery of justice.”

The lawyers for Cengiz and DAWN say they have standing under the Torture Victims Protection Act, a law that provides victims of state-sponsored torture in other countries with a mechanism to sue for damages if their alleged perpetrators set foot in the United States.

“Plotting to kill a United States resident writing for The Washington Post and heading a Washington-based organization subjects the defendants to the US justice system,” said attorney Robert C. Harmala.