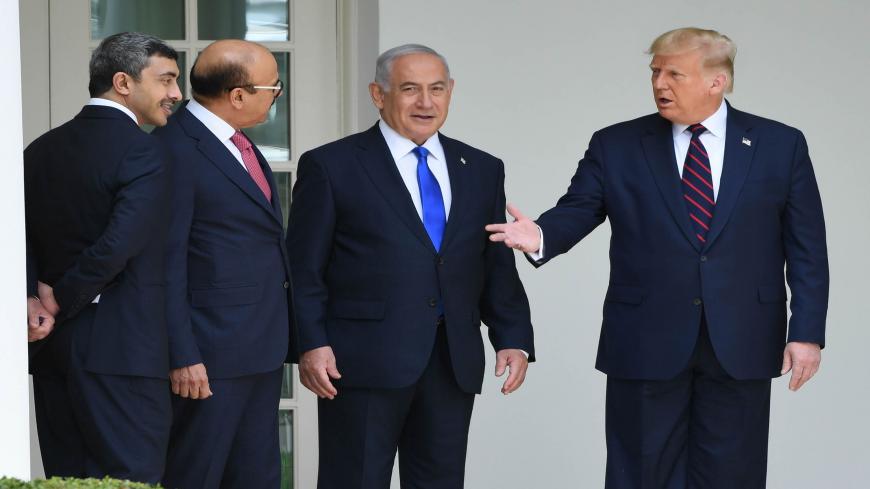 Prime Minister Benjamin Netanyahu pledged on that occasion to submit the Abraham Accords for government and Knesset approval. The Cabinet ratified Oct. 12 the agreement unanimously. The Knesset plenum is expected to ratify the deal Oct. 15.

Speaking at the beginning of the Cabinet meeting, Netanyahu said, "Today I am submitting the historic peace agreement with the UAE to the Cabinet. This is the first peace agreement that Israel has signed in over 25 years. We are also completing the agreements with Bahrain, meaning that we will be making peace with two Arab states at the same time."

Addressing his right-wing allies, Netanyahu emphasized that unlike agreements signed with the PLO, with Egypt and with Jordan, in the agreement with the Emirates "Israel is not conceding any territory whatsoever. … This agreement is an agreement that is based on peace from strength, not peace from concessions that will weaken Israel and endanger it, but peace from Israel’s strength."

Netanyahu also highlighted the economic benefits generated by the deal with the Emirates and the declaration of normalization signed with Bahrain, citing the opening of Saudi skies for Israeli airlines and the decision by world energy leader Chevron to enter the Israeli market.

Netanyahu said that over the weekend he had spoken with Abu Dhabi Crown Prince Mohammed bin Zayed Al Nahyan, whom he called a "friend." According to Netanyahu, both he and the crown prince extended invitations to each other for mutual visits. He said he believed they would meet soon. "We discussed the cooperation that we are advancing — in investments, in tourism, in energy, in technology and in other areas," tweeted Netanyahu. Bin Zayed tweeted after the phone call, "During a phone call with Israeli Prime Minister Benjamin Netanyahu, we discussed strengthening bilateral ties and examined prospects for peace and the need for stability, cooperation and development in the region."

Netanyahu said that even before he will meet with the Emirati leader, a delegation from the UAE is expected to arrive to Israel, and an additional Israeli delegation will visit Abu Dhabi. "I assure you that we will welcome the delegation from the UAE with the same warmth and the same great excitement as the Israeli delegation was welcomed with in Abu Dhabi," stressed the Israeli premier. A first Israeli-American official delegation had traveled to Abu Dhabi at the beginning of September, ahead of the White House signature ceremony, to negotiate the details of the deal.

Cementing Israel-UAE economic relations, a first cargo shipment arrived from Abu Dhabi to the Haifa port Oct. 12. The MSC Paris, one of the first cargo ships to make the sea journey between the two countries, carried electronics and household appliances.