The meeting was the countries' first since signing a normalization agreement last month. 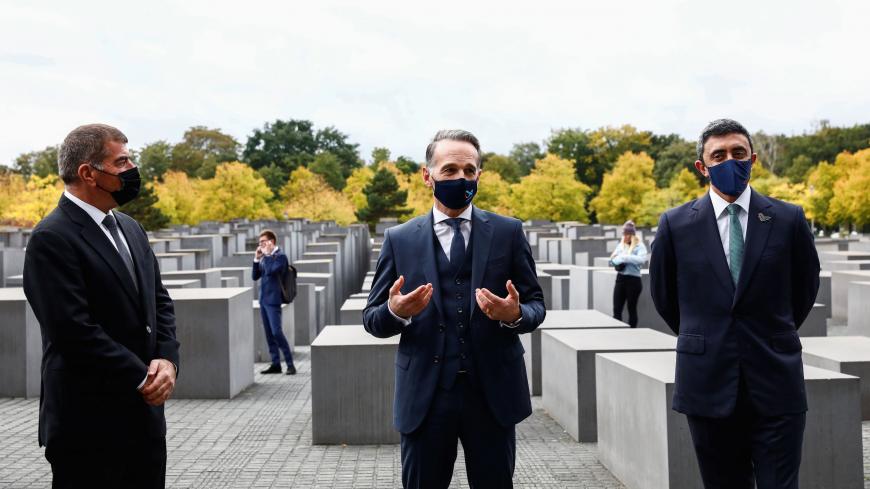 Diplomats from Israel and the United Arab Emirates met in Germany today for their first meeting since normalizing ties last month.

Germany’s top diplomat said the historic agreement between the two countries has the potential to advance stalled peace efforts.

“The courageous peace agreement is an opportunity for movement in dialogue between Israelis and Palestinians,” Foreign Minister Heiko Maas said in a tweet.

They also visited a Holocaust memorial in Berlin, according to the AP. Nahyan wrote “Never again” in the visitor book at the memorial, Reuters reported.

The UAE and Israel agreed to establish full diplomatic and economic relations in August and officially signed the agreement in September during a White House ceremony. Following the UAE’s lead, Bahrain also agreed to normalize ties with the Jewish state and likewise signed a deal in Washington.

The UAE was the first country in the Gulf to establish ties with Israel, though Israel had quietly grown closer to Saudi Arabia and other Gulf states in recent years due to concerns over Iran.

Jordan and Egypt were the only Arab countries to have recognized Israel before the Emirati and Bahraini decisions.

Following the accord, businesses in the UAE and Israel have signed a series of agreements pledging to further economic ties.

Germany is a close ally of Israel, in part due to the legacy of the Holocaust. In April, Germany designated the entirety of the Lebanese group Hezbollah as a terrorist organization. Previously, Germany only considered Hezbollah’s military wing as such. Israel, which has clashed with Hezbollah for years, delighted at the move.

The European power is also not afraid to voice its disagreements with Israel, however. In July, Germany warned Israel against its plans to annex parts of the West Bank. Israel agreed to suspend plans in exchange for normalization with the UAE.