Netanyahu and Nasrallah at a standoff

Israeli Prime Minister Benjamin Netanyahu launched another verbal confrontation against Hezbollah Secretary-General Hassan Nasrallah, but is unlikely to opt for a preemptive strike on Hezbollah missiles. 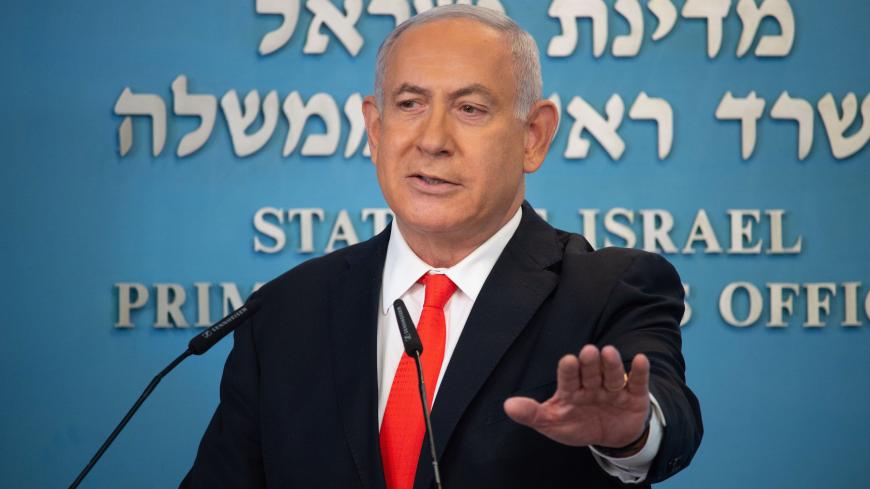 Israeli Prime Minister Benjamin Netanyahu gives a briefing on coronavirus developments in Israel at his office in Jerusalem, on Sept. 13, 2020. - YOAV DUDKEVITCH/POOL/AFP via Getty Images

The ongoing duel between Prime Minister Benjamin Netanyahu and Hezbollah Secretary-General Hassan Nasrallah is beginning to repeat itself. Netanyahu gave his latest Hezbollah-related performance in his annual address to the UN General Assembly on Sept. 29, videotaped several days earlier in Jerusalem.

Netanyahu presented his viewers with what he described as a storage depot of Hezbollah missiles in the heart of Beirut’s Janah neighborhood, saying it was located next to a gas company warehouse and a service station. Netanyahu’s meticulously prepared PowerPoint was convincing. It included skillfully presented photos purported to be the entrance to the missile site next to the entrance of the gas warehouse, as well as a personal appeal to the residents of Lebanon explaining how Hezbollah and its Iranian patrons were endangering their well-being.

Netanyahu masterfully leveraged the horrific explosion at the Beirut port the previous month as only he knows how. The point was to pit Hezbollah and the residents of Lebanon against each other, to deepen the gap between supporters and opponents of the Shiite organization and to warn residents of the beleaguered state and its capital city that Nasrallah continues to drag them into an abyss. Israeli intelligence is closely monitoring the deterioration in Lebanon and the population’s growing despair. Few in Jerusalem are shedding a tear over the predicament of Israel’s northern neighbor. All Israel is doing is helping the Lebanese arrive at the correct conclusion, as it sees it: Nasrallah is to blame for all their country’s troubles.

Nasrallah did not disappoint in responding to Netanyahu just minutes later, calling the prime minister a liar, denying outright all his claims and saying that Hezbollah would not store missiles near gas canisters. “We know where to store missiles,” he added. He then invited media representatives to tour the warehouse to which Netanyahu had pointed. The tour of the site was conducted an hour later, but did not resolve the dispute or clarify the situation. Netanyahu and Nasrallah found themselves facing off with their fingers on the trigger and harsh domestic crises roiling around them.

By the way, a similar standoff occurred exactly two years ago, with the only difference being that Netanyahu delivered his September 2018 speech to the General Assembly in person. The speech was similar, as was the information he presented of a missile depot near Beirut’s international airport, and Nasrallah was also quick to respond. This week, the information that Netanyahu presented was slightly more precise, including close-ups of the entrance door to the purported site.

Hezbollah’s standing in Lebanon in those days was also somewhat different, with its problems less pronounced and the Beirut port intact. These days, Nasrallah is fighting for his organization’s legitimacy in Lebanon, with the explosion that literally and figuratively rocked the state setting off a social media storm that has not abated and a significant number of Lebanese losing their fear of Hezbollah’s mythical power. Netanyahu is also in far more dire straits than he was two years ago. His trial on charges of corruption has begun, the economy is tanking under the impact of the coronavirus pandemic, the disease is raging and Israelis are blaming Netanyahu for the embarrassing fact that their startup nation is leading the world in terms of new COVID-19 deaths per capita.

Nonetheless, despite the vague sense of deja vu generated by this week’s scuffle, it should not be taken lightly. Two years ago, following Netanyahu’s General Assembly address, an article on this site speculated that Israel might be weighing a preemptive strike on Hezbollah’s missile infrastructure in Lebanon. Netanyahu hinted at such an option at the time, as he did once again this week.

On the one hand, Israel has never landed a preemptive strike against any of its enemies’ conventional arms buildup. However, Israel argues that Hezbollah has an significant arsenal of missiles and is trying to adapt some of them for precision strikes. Acquisition of accurate strike capabilities against Israeli infrastructure, military airfields and other strategic targets would be a dramatic game changer that Israel cannot afford.

What is more, Israel has avoided making a preemptive strike so far, fearing the destruction Hezbollah could wreak in retaliation on the Israeli heartland. These days, the health and economic crisis are wreaking havoc on the heartland without Nasrallah. With unemployment surging and most of the economy under lockdown, Israel is on a warlike footing in any case. In other words, at this precise point in time Israel has nothing to lose from a preemptive strike. Such a surprise attack would enable it to destroy a significant part of Hezbollah’s weapons and missile systems, a result Israel would be unable to achieve if it lost the element of surprise once a war broke out.

This analysis notwithstanding, there does not appear to be any need at this stage to prepare the shelters or flee. Netanyahu is under heavy personal siege and dragging Israel into all-out war would be tantamount to political suicide under these circumstances. Israel would also have a hard time mobilizing international cooperation or support for a move that could set the entire Middle East on fire. In addition, the prospects that a preemptive strike on Nasrallah would completely destroy Hezbollah’s rocket and missiles capability are nil. Unlike past destruction of two Arab nuclear reactors (in Iraq and Syria), a synchronized raid on hundreds of missile and rocket sites is a complex endeavor with uncertain prospects of success.

Taken together, all these considerations preclude a realistic option of a preemptive strike. Neither Nasrallah nor Netanyahu are up to anything but a clash of words, given their circumstances. Having said all of the above, the usual caveat is in order: We are in the Middle East. Anything, at any place, at any time, is possible.