Shiites across southern and central Iraq are marching to Karbala for Arbaeen. 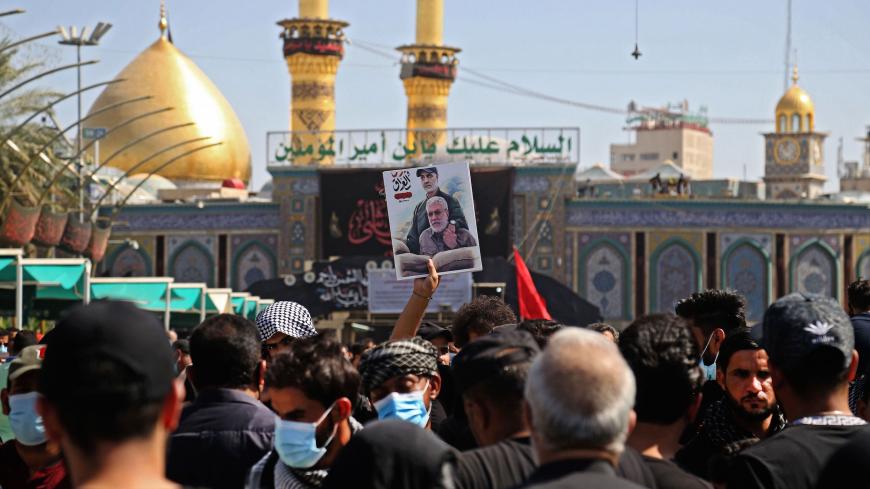 Shiite Muslims take part in a mourning ritual in Iraq's central holy city of Karbala on Oct. 8, 2020, marking Arbaeen, the end of the 40-day mourning period for the seventh century killing of Imam Hussein. - MOHAMMED SAWAF/AFP via Getty Images

The commemoration of Arbaeen in Iraq was different this year due to the unique circumstances of the pandemic and political conflict.

Shiites across the world commemorate Imam Hussein's martyrdom on Oct. 8. They gather in Iraq, marching from various cities toward Karbala, where the holy Shrine of Imam Hussein is located. Non-Iraqi Shiites were not able to attend Arbaeen this year due to travel bans adopted by Iraq and other countries.

Top Shiite cleric Ayatollah Ali Sistani has taken the opportunity to cleanse Arbaeen of politicization by politicians and neighboring countries, which often promote their political agendas during the march.

The Maukib has deployed hundreds of clerics along the roads leading to Karbala to “propagate the message of Imam Hussain during Arbaeen" and “correct the course after years of politicization of the religious occasion,” according to a cleric participating in the program who spoke to Al-Monitor.

As a result, almost no political parties have raised their flags or taken part in the marches.

During Ashura, 40 days ago, the Husseiniya Processions Authority in the Diwaniyah governorate prohibited processions by armed factions and political parties from participating in the ceremonies.

Despite the effort, a group of protesters attending the march clashed with the security force in charge of protecting the holy shrines in Karbala on Oct. 7. The protesters were shouting slogans against political corruption and foreign interference in Iraq. The conflict arose when they attempted to enter the shrine without passing a security inspection.

The protesters pulled back and no causalities were reported. However, media outlets affiliated with pro-Iran militias exploited the incident to escalate their propaganda against the protests that have been taking place in Iraq since last October. They accused pro-Islamic State militias and Baathists of being behind the protests. WhatsApp and Telegram groups affiliated with militias like Sabereen News promoted the idea that the protest movement is anti-religion and against Shiites, working to bring Baathists and terrorism back to Iraq.

This propaganda has been common since the protests began last year. However, the protesters have been able to defang it by remaining peaceful and eliminating extremists and their slogans from the protests.

As the protesters prepare for a new wave of protests later in October, the militias and political parties aligned against them seem to trying to goad them into take extreme actions and thus galvanize the public against them.