The fighting on Iran’s northwestern border has begun to alarm officials who are attempting to mediate a cease-fire between the two sides. 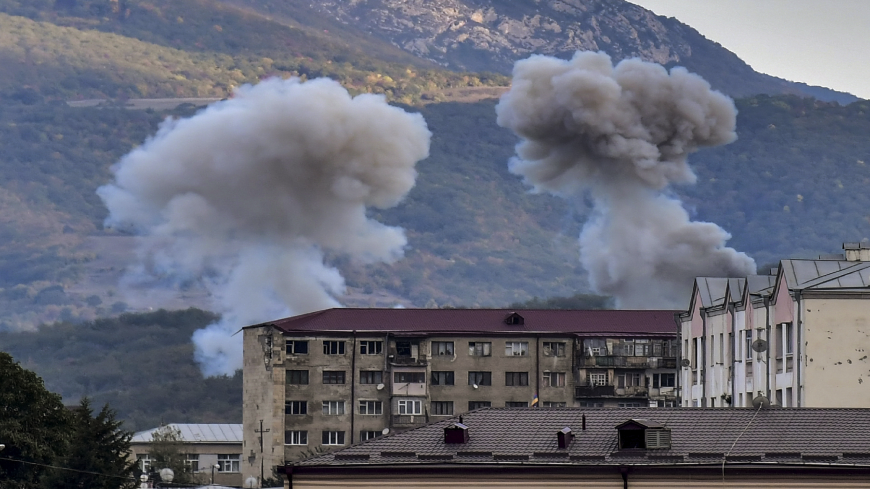 Smoke rises after shelling in Stepanakert on Oct. 9, 2020, during ongoing fighting between Armenia and Azerbaijan over the disputed region of Nagorno-Karabakh. - ARIS MESSINIS/AFP via Getty Images

As the battle between Armenia and Azerbaijan continues on Iran’s northwestern border, Iranian military officials have warned about the escalation as government officials travel to the neighboring countries in order to broker peace.

Alireza Sabahifard, commander of the Iranian army’s Air Defense Force, said, “We will not give permission to any country to violate Iran’s skies. Sabahifard had traveled to Iran’s northwestern border to speak to reporters. He said Iran’s air defense bases are monitoring Iran’s skies around the clock, adding that Iran had moved its most advanced air defense systems to their border when fighting between the two countries broke out in late September.

Ever since the fighting erupted, the Iranian side of the border has been hit by shelling, causing property damage. The Nagorno-Karabakh region is internationally recognized as Azerbaijan territory but controlled by ethnic Armenians.

Iranian Deputy Foreign Minister Abbas Araghchi traveled to Baku, the capital of Azerbaijan, to mediate a cease-fire between the two countries. After meeting with Azerbaijani President Ilham Aliyev, Araghchi said that Azerbaijan “responded positively” to Iran’s recommendations on how to de-escalate fighting in the Nagorno-Karabakh region. Araghchi left Baku for Moscow and will later travel to Ankara and Yerevan, the capital of Turkey and Armenia, respectively.

Iran is in a difficult position in this conflict. It has historically sided with Armenia but has had to maintain some veneer of impartiality due to its own ethnic Azeri population, which is sympathetic to Azerbaijan. However, Azerbaijan is supported by both Israel and Turkey, which causes concern for Iran, and therefore Iran has additional urgency in wanting to end the fighting as soon possible for fear of giving either country more influence on its borders should a wider war break out.

Meanwhile, Iran is still struggling to contain the coronavirus and continues to break daily records with deaths and infections. There were over 8,000 confirmed infections in the last 24 hours alone, a record for the country. In the same time period, there were almost 2,000 hospitalizations. Iran also had 399 COVID-19 deaths in the last 24 hours. Since the outbreak of the coronavirus, there have been over 34,000 deaths, but Health Ministry officials have said this number is probably twice as high.

Deputy Health Minister Iraj Harirchi said that Tehran hospitals are becoming overwhelmed because individuals in smaller cities are traveling to Tehran for coronavirus-related symptoms. He said that half of the Iranians who are admitted to ICU for symptoms eventually die, adding that Iranians should expect an increase in deaths given that the overall cases in the country are going up.

Harirchi said that currently only about half of the residents are observing health protocols and guidelines, and this number must reach 80% if Iran wants to decrease the number of cases and deaths.