Iranians are paying close attention to the US presidential race, devouring constant media coverage and analysis. 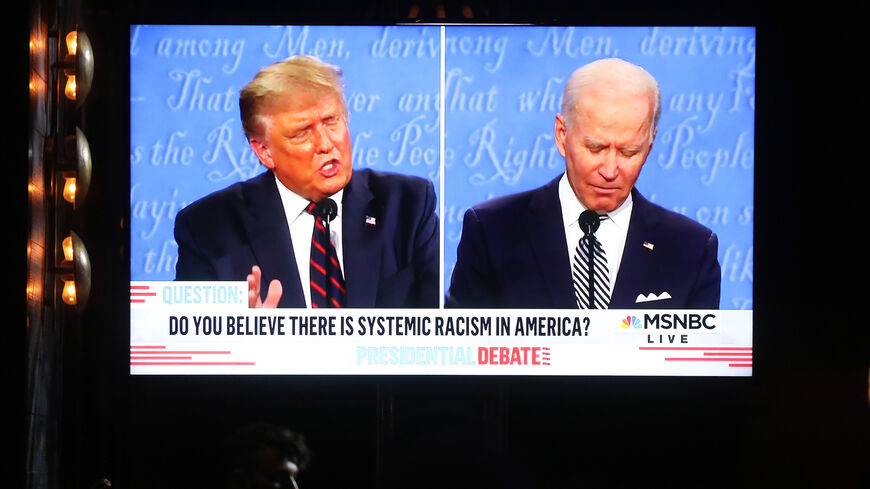 A broadcast of the first debate between President Donald Trump and Democratic presidential nominee Joe Biden is played on a TV at The Abbey, which seated patrons at socially distanced outdoor tables, on Sept. 29, 2020 in West Hollywood, California. - Mario Tama/Getty Images

Widespread coverage by Iranian news outlets and reactions across social media platforms to the town hall TV appearances of the US presidential candidates served as yet another indication that from an Iranian perspective, the November vote is much more than a foreign country’s domestic affair.

Media outlets commented extensively on the incumbent US president’s manner in his exchanges. “Trump, who is known as the violator of all rules, repeatedly ignored and interrupted the host,” according to moderate news agency Khabar Online, which also described the town hall debate as a “predicament” the US president “did not see coming.”

While they didn’t openly praise the Democratic candidate, the leading Iranian media sources also focused on the way the TV exchanges laid bare the two candidates’ perspective toward governance. Hard-line Fars News Agency, run by the Islamic Revolutionary Guard Corps, highlighted the way Trump “dragged his feet” when he was grilled on whether he had taken a COVID-19 test before his controversial first debate with his rival Joe Biden.

There were also predictions and polls that have found Biden in better shape, winning in an expected landslide. But many Iranians highly doubt his victory would be recognized by Trump. “Trump once again dodged questions about a smooth transition of power,” according to the conservative news agency Jamaran in its recap of the town halls.

As the US election draws near, the Trump administration’s “maximum pressure” policy on the Islamic Republic is intensifying. Combined with the impacts of the coronavirus pandemic, the project appears to have enormously weakened the value of the Iranian national currency, pushing prices to all-time highs. Losing nearly half of their purchasing power in the past six months alone, members of the Iranian public are now exchanging views on whether a Biden presidency will usher in a time of economic relief.

“We have a turbulent six-month period ahead of us,” predicted Iranian entrepreneur Pedram Soltani, criticizing the Iranian government for “driving in the neutral gear … under the impression that a Biden victory is the solution to all problems.” President Hassan Rouhani has been facing particularly relentless fire from opponents, who accuse him of allowing Iran's affairs to hinge upon the US election results.

“The question is not whether Trump or Biden will win, because they are cut from the same cloth,” tweeted ultraconservative Deputy Parliament Speaker Nazamoddin Mousavi. “It is the Iranian president who should make decisions based on revolutionary principles … and stand firm, with no passivity in the face of any Democratic or Republican president.”