Between a rock and hard place: Iran’s dilemma in Nagorno-Karabakh conflict

Tehran is sending forces to its borders in anticipation of the Armenian-Azeri conflict spilling over. 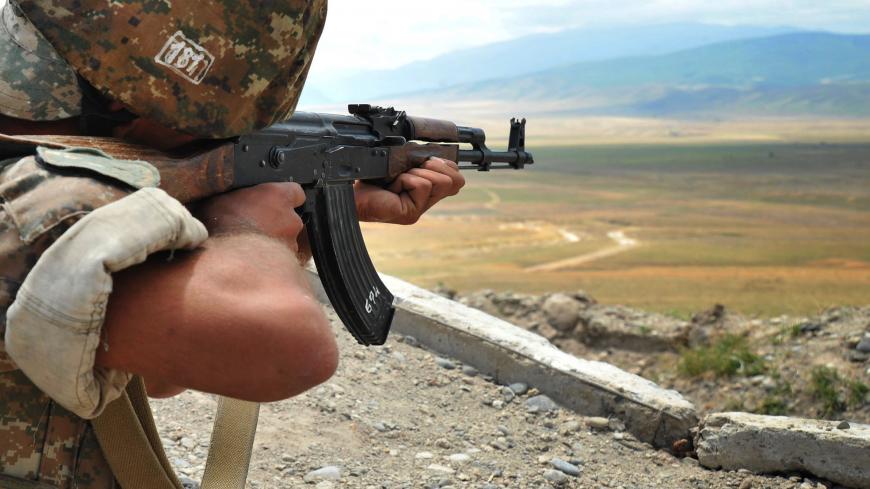 An Armenian soldier of the self-proclaimed Republic of Nagorno-Karabagh aims his Kalashnikov assault rifle as he stands in a trench at the frontline on the border with Azerbaijan near the town of Martakert, July 6, 2012. - KAREN MINASYAN/AFP/GettyImages

In a country where a quarter of the population belongs to the Azeri ethnicity, over 400 miles of border are shared with Azerbaijan and the official version of Islam in both countries is Shiism, it shouldn’t be a very difficult choice to make when the northern neighbor goes to war.

However, there are many reasons for Iran to think twice before siding with Azerbaijan in its recent conflict with Armenia.

Armenia shares about 27 miles of border with the Islamic Republic and plays a positive role as the only Christian neighbor to the sanction-laden country.

Iranians of Armenian origin make up the overwhelming majority of the country’s Christian minority, which number more than 150,000 of the total population of 84 million. As for the Azeris, there is no accurate number, but according to several sources it varies between 10 million and 20 million.

In the city of Tabriz in the north of Iran, dozens of Azeri Iranians headed out into the streets slamming the state’s neutral position on the war, while others demonstrated in Tehran chanting slogans in support of the army of the Republic of Azerbaijan.

The official Iranian stance — expressed by the Foreign Ministry on several occasions — has been to call on both parties to practice restraint, offering to mediate.

Iranian Foreign Ministry spokesman Saeed Khatibzadeh told Reuters earlier this week, “Iran has prepared a plan with a specific framework containing details after consultations with both sides of the dispute, Azerbaijan and Armenia, as well as regional states and neighbors, and will pursue this plan."

It is important to note that Iran's official stance, despite offering mediation and refraining from taking sides, recognizes the disputed Nagorno-Karabakh region as an Azeri territory and calls on Armenia to withdraw from it.

This was expressed by Ali Rabiei, spokesman of the Iranian presidency, and also unofficially but remarkably by Ali Akbar Velayati, international affairs adviser to Iran’s supreme leader, who expressed this view to Kayhan daily, the newspaper whose editor in chief is believed to be one of Ayatollah Ali Khamenei’s confidants.

Khamenei, an Azeri-Iranian himself, has yet to comment on the developments, but a number of his representatives in Azeri-populated northwestern Iran issued a statement declaring support for Azerbaijan in the conflict.

The signatories — Khamenei’s representatives in the provinces of Ardabil, East Azerbaijan, West Azerbaijan and Zanjan — stressed, "There is no doubt that Nagorno-Karabakh belongs to Azerbaijan and its government's move to recapture the region is completely legal, according to Sharia, and in line with four resolutions of the United Nation's Security Council.”

Moreover, Khamenei’s representative in the Republic of Azerbaijan, Ali Akbar Ajagnejad, said during a speech Oct. 3 that he is ready to go to Nagorno-Karabakh and fight beside the Azeri youth until he is martyred.

For the moment, the Iranian stance seems to be inconsistent, but the fact is that decision-makers in Tehran are counting on time to get them a solution that would rid them from the urge to take a side, for whatever the side they take, there are going to be some bitter repercussions.

If Tehran decides to support Armenia, then the internal implications aren’t going to be easy, given the wide support Azerbaijan enjoys among the Azeris inside Iran; besides, it goes without saying that ties with Azerbaijan will receive a blow.

This is going to give Israel, which has backed Azerbaijan by selling arms, additional leverage on Iran’s borders. Just a few weeks ago, Israel reached a normalization agreement with both the United Arab Emirates and Bahrain, giving it an unprecedented reach to the waters of the Persian Gulf.

On Sept. 30, a drone that entered Iranian airspace was downed by the country’s air defenses. Iran’s concerns over Azerbaijan’s drones is related mainly to the fact that most of Baku’s drones are bought from Israel.

Back in 2014, Iran blamed Azerbaijan, without naming it, for being the base of an Israeli drone that Tehran says to have shot down near the highly sensitive nuclear enrichment facility in Natanz in central Iran.

Although Iranian officials didn't specify Azerbaijan, they said the drone came from a “former Soviet republic to the north.” Azerbaijan's government has denied the claim calling it a "provocation."

Another sensitive element that makes Iran want this war to finish before it gets to the point of no return are the recent reports about the transferring of Syrian fighters by Turkey to fight alongside Azerbaijan.

A report by Al-Monitor’s Sultan Kanj confirmed these reports, highlighting the fact that Turkish-backed Syrian militants are turning into a regional task force ready to intervene wherever Ankara is involved. This itself is a matter of concern to Tehran, which does not accept having such forces close to its border. To Iran, this is a threat for stability on its northern border and a weight for Turkey it is unlikely to accept in its backyard.

Moreover, there are reports that Turkish President Recep Tayyip Erdogan is looking to take advantage of Russia being bogged down in conflicts elsewhere to claim a bigger role in this conflict.

The flock of fighters to both sides of the border is in fact a matter of concern to Tehran. Christian Armenian fighters heading from Lebanon and Syria to Armenia to fight alongside Armenian forces in Artsakh — as the region is known in Armenian — is also a long-term threat for stability and brings close to home the fragility of the Levant.

The Armenian-Azeri rivalry outside Iran might for many reasons spill over the borders of the Islamic Republic, and this is what Tehran is anticipating by sending forces to the border areas.

The promise of stability that Iran’s Islamic establishment has always made to justify its involvement in conflicts away from home, such as in Syria and Iraq, is now under threat, especially with the cocktail of players on the other side of the border.

The economy is another element that worries the Iranian decision-makers, with pressure mounting day after day amid additional US sanctions. The plan to link the Iranian southern port city of Chabahar to Russia through a railway crossing through Azerbaijan creates more reasons for concern in Tehran. While on the Armenian side, a 90-mile-long gas pipeline makes it clear that this time Iran can't cherry-pick its position based on its own preferences alone.

Back in the 1990s, the Karabakh conflict created a dilemma of another type for Iran.

Tehran mediated between the two newly established countries, though it was more on the Azerbaijani side. This is reflected in the diaries of late President Hashemi Rafsanjani, and in several other accounts by Iranian officials who witnessed that period. According to a report by the Islamic Revolutionary Guard Corps-affiliated Mashregh News, Iran facilitated the transfer of hundreds of Afghani fighters to Azerbaijan to fight alongside the government of late President Haydar Aliyev, the father of current President Ilham Aliyev. However, in less than two years, Aliyev’s alliance with the Iranians came to an end, and he called on them to leave and started a crackdown on their main ally, the Islamic party, whose leadership was arrested for allegations it is financed by Tehran.

After 1994, Iran shifted to be more on Armenia’s side due to the political differences with Aliyev. Yet Iranian volunteers continue to flock to Azerbaijan to fight beside the Azeris in the war with Armenia, and many Iranian fighters were killed and buried in several locations around the war front.