Threats by an influential hard-line cleric against Iranian women with loose headscarves has opened up old wounds left behind in acid attacks perpetrated by religious extremists. 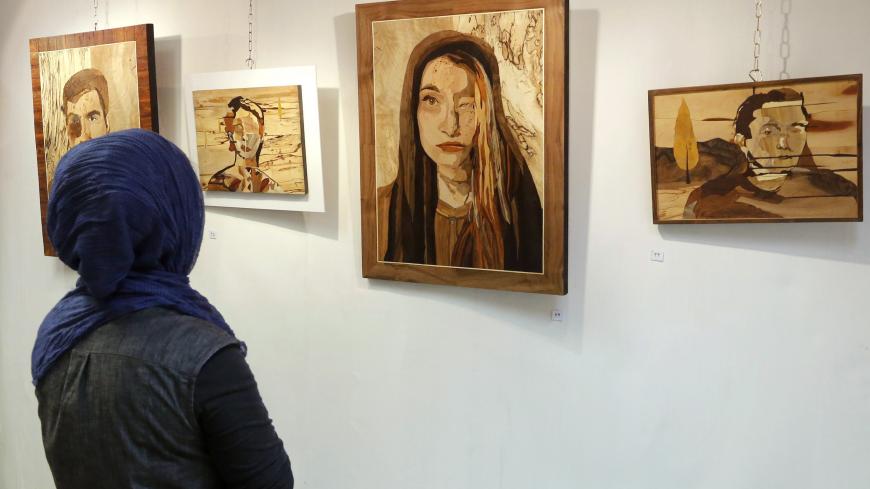 A woman looks at art work made by Iranian victims of acid attacks at the Ashianeh Gallery in Tehran on Feb. 28, 2018. - ATTA KENARE/AFP via Getty Images

“We must make the social environment unsafe for these people. … We can’t let them simply break the norms in streets and parks,” said Ayatollah Yousef Tabatabai-Nejad in reference to Iranian women who violate the Islamic Republic’s mandatory dress code known as hijab. Tabatabai-Nejad is the Friday prayer imam of the central city of Esfahan and a de facto local governor, as is the case with all Friday prayer leaders across Iran. He and his colleagues hold their mandates from Supreme Leader Ayatollah Ali Khamenei.

“We should have no fear in facing those norm breakers,” the cleric added, prompting widespread fears about a fresh wave of public violent attacks against women with loose headscarves. Back in 2014, the city of Esfahan was rocked with coordinated chain assaults by religious fundamentalists on motorbikes. The attackers splashed acid on the faces of their female victims, who were mostly caught off guard behind wheels. Of the 12 cases reported, only four ended up in formal lawsuits. And despite pressing demands from a shaken public for speedy trials, the Iranian judiciary declared the file closed four years later, bringing none of the perpetrators to justice.

The 2014 acid attacks came only after the same Friday prayer imam openly called for force against hijab violators. In a provocative speech, Tabatabai-Nejad said verbal advice would no longer work and time had come to “raise the sticks.”

Six years on, the cleric’s new threats appeared to have reinjected fresh fears among Iranian women. More strikingly, it reopened wounds that remain unhealed on the faces of the acid attack victims who shared traumatic accounts of their ordeals and their frustration over the justice that was never served.

“Back then, the city was shattered with horror. … The same story is happening again. I don’t feel well these days,” wrote Marzieh Ebrahimi, one of the acid attack survivors, still reeling from the tragic encounter and coping with the permanent scars. “It’s our right to be able to go out with no anxiety. … We are not detainees, we are citizens,” she added.

Renowned women's rights activist Azar Mansouri also strongly questioned the Friday prayer imam’s comments, saying such a stance “only further widens the gap between the public and the state.” She advised the ultraconservative ayatollah to “abandon this discourse before it’s too late.” In another reaction, Minister of Communication and Information Technology Amir Nazemi urged the cleric to clear the air and specify what he meant by creating an “unsafe environment” for those women.

While it’s not typical of Iran’s powerful figures to bow to pressure and publicly retract their remarks, the building backlash ultimately forced the hard-line cleric to come out with some sugarcoated correction, if not an apology, saying his words had been misinterpreted and that he did not endorse physical attacks.

The cleric’s original inflammatory remarks, however, are no novelty in the Islamic Republic’s propaganda about controversial social issues. The ruling establishment has been developing over the past four decades its own version of “Promotion of Virtue and the Prevention of Vice,” which has served as a free pass for religious fanatics to justify their violence under the guise of a sacred fight, which more often than not has been found by advocates as a breach of civil rights. Videos make rounds every now and then across Iranian social media showing frustrated women in arguments or even brawls with religious extremists who have an institutionalized “duty” in the theocratic system to warn random female strangers about their hijabs.

An even stronger green light came from Khamenei in 2017 when he introduced the notion of “atash-beh-ekhtiar,” the Persian equivalent for “fire at will.” Under the umbrella concept, Khamenei advised “revolutionary youth” not to wait for orders but rather to act independently on cultural and social problems. The instruction has been interpreted as another boost to the bike-riding, plain-cloth regime loyalists in their campaign to “guide” Iranian women in the streets while enjoying the privilege of immunity from prosecution as witnessed in the case of the Esfahan acid assaults.