Turkish President Recep Tayyip Erdogan has urged parliament to curb the influence of the Turkish Medical Association, which has been critical of the state’s handling of the COVID-19 pandemic. 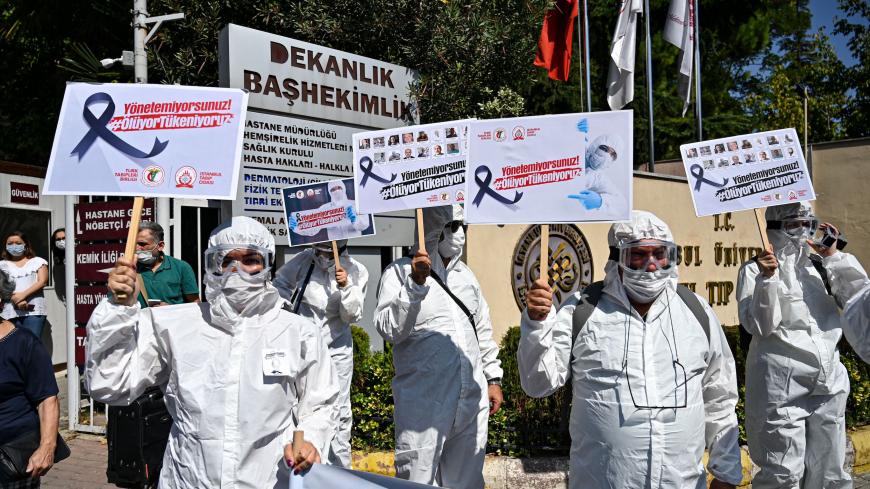 Health workers and doctors wearing personal protective equipment hold placards reading "You cannot manage, we are dying - We are running out" during a demonstration against the goverment's health policy on Sept. 15, 2020, in front of Istanbul University medical school. - OZAN KOSE/AFP via Getty Images

ISTANBUL — As the COVID-19 pandemic continues to upend life in Turkey and around the globe, Turkish President Recep Tayyip Erdogan condemned a medical group that has been critical of the state’s response amid the health crisis.

Speaking to Justice and Development Party (AKP) lawmakers in Ankara Wednesday, Erdogan urged Turkey’s parliament to introduce legislation that would diminish the influence of the Turkish Medical Association (TTB) and other professional associations, which he said were acting against the nation’s constitution in ways that had “reached an unbearable level.”

The president referred to newly elected TTB chair Sebnem Korur Fincanci without using her name, saying she had links with “terrorism” groups.

"You take someone from a terrorist organization and put them at the head of the TTB,” Erdogan said Wednesday. “Since when can those involved in terrorism lead an important organization like the TTB? This is not called a democratic approach.”

Fincanci and other TTB council members did not respond to requests for comment Thursday afternoon, but when asked Wednesday about Erdogan’s comments during the funeral of TTB Aydin chair Esat Ulku, who died of COVID-19, Fincanci said, "[The statements] are not on our agenda. We have lost seven health workers in a week. This is on our agenda."

Throughout the coronavirus pandemic, TTB members have openly criticized the state’s approach to stemming infection rates, calling for stricter guidelines to reduce the spread of the disease. The TTB has also called for greater transparency in the way Turkey’s Health Ministry publishes data, at times questioning the accuracy of official figures, which some have claimed do not represent the true scale of the health crisis.

Such actions were met with condemnation by political leaders in Ankara, including Nationalist Movement Party (MHP) chair and AKP ally Devlet Bahceli, who accused the TTB of “praising terrorism" earlier this month.

"Our problem is a handful of enemies of Turkey who have nested in the central committee of the TTB. … This is why I say the TTB should be closed," Bahceli said in an Oct. 6 speech to his parliamentary group.

During Erdogan’s speech Wednesday, the president proposed legislation that would restructure the medical association similarly to one passed in July that decentralized bar associations in larger cities and diluted the influence of critical lawyer groups.

Erdogan argued the change would foster better representation for doctors and said lawmakers should prioritize the drafting of new measures in the coming weeks. The AKP and MHP together hold the majority of votes in parliament and will likely pass such legislation if it is introduced.

Before assuming leadership of the TTB in October, Fincanci worked to document cases of torture and human rights infringements as a forensic physician. She was arrested in June 2016 on charges of disseminating terrorist propaganda and acquitted by a Turkish court in July 2019.

The Human Rights Foundation of Turkey, for which Fincanci also serves as president, condemned Erdogan’s speech in a statement Thursday, saying the “unacceptable comments made by the president” resemble the “threats and pressure to obstruct the human rights advocacy activities of both our beloved president and our foundation.”

“Professional associations are an essential part of civil society in Turkey as they are elsewhere in the world,” Buyum told Al-Monitor. “Their ability to operate independently without interference or threats from the state is essential for the protection of the right to freedom of association.”

As of Oct. 15, the Turkish Health Ministry reported over 340,000 COVID-19 cases in the country and more than 9,000 virus-linked deaths. In statements Wednesday, Turkish Health Minister Fahrettin Koca said about 40,000 medical professionals have tested positive for the virus and 107 have died since Turkey’s first recorded case in March.