Egypt’s Al-Azhar, along with social media activists from Egypt and the Arab world, launched harsh campaigns against the French government for supporting the cartoons that offended the Prophet Muhammad. 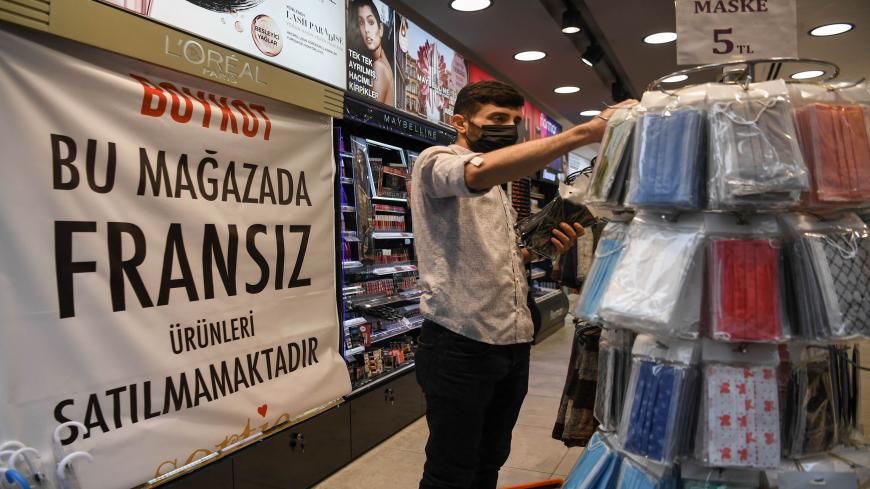 An employee works in a shop near a banner reading "Boycott, We do not sell French products in this shop," Istanbul, Turkey, Oct. 30, 2020. in Istanbul. - OZAN KOSE/AFP via Getty Images

Despite the crisis between Arab and Muslim countries and France over the cartoons of Charlie Hebdo newspaper, which offended the Prophet Muhammad, news agencies reported Nov. 3 that the Egyptian and the French navies executed joint naval drills in the Mediterranean.

The news of the joint drills angered some Egyptian, Arab and Muslim social media activists, especially those who launched Oct. 25 a campaign to boycott French products.

Calls for a boycott spread on social media against the backdrop of French President Emmanuel Macron's statements Oct. 21, saying that French teacher Samuel Paty was killed Oct. 16 by Islamists for showing to students in a school the cartoons of Charlie Hebdo.

“Paty was killed because he embodies secular and democratic values of the French Republic, so we are not going to give up cartoons,” he added.

As an official support to Charlie Hebdo and as part of a tribute to history teacher Paty, cartoons were projected Oct. 23 on governmental buildings in France, which caused anger in Muslim countries.

Abdul-Khabir Atta, professor of political science at Assiut University, criticized the attitude of some activists urging the Egyptian state to adopt boycott as an official action against the French government, telling Al-Monitor, “I don't expect an official reaction. The Egyptian government believes in solving crises through negotiations and peaceful dialogue instead of escalation, which may make crises more complicated as some countries — namely Turkey — are doing."

The Egyptian presidency announced Nov. 2 that Egyptian President Abdel Fattah al-Sisi received a phone call from the French president, in which Sisi stressed on the necessity of “spreading the values of coexistence between adherents of different religions through dialogue and nonprejudice to religious symbols.”

Atta said that Sisi has strong relations with France, which may prompt Macron and his government to review their stance without escalation, especially after Sisi had stressed on his stance refusing offensive cartoons several times.

Relations between Sisi and Macron have strengthened recently due to the common stances and visions of Egypt and France regarding the Libyan crisis and the rejection of Turkey's military interventions in it, and the mutual refusal of Turkey's research and exploration for gas in the Mediterranean, in violation of the Egyptian, Greek and Cypriot agreements on demarcating the maritime borders.

Atta ruled out that Macron will issue an official apology, expecting that the French government will probably resort to appeasement by clarifying its position, and that it did not intend to insult any Islamic symbol, but rather intended to defend freedom of opinion and expression.

Ahmed Kilany, professor of public opinion at Suez Canal University, told Al-Monitor that the boycott campaign was fiercer than what could be expected to the extent that “it can push France to make an official apology just as its Ministry of Foreign Affairs issued an official demand to Arabs and Muslims not to boycott the French products.”

The French Ministry of Foreign Affairs issued a statement calling on Muslim countries and peoples not to boycott their products, noting that the Muslims of France are an integral part of society and history, and that fighting radical Islamism is carried out in cooperation with them.

“Although the results of most of the boycott campaigns may be slight and short-lived, the French exporters and the French government may not be able to bear them especially in light of the economic recession that the world suffers due to the coronavirus pandemic. Therefore, the French Foreign Ministry tried to contain the situation as quick as possible,” Kilany said.

The boycott calls spread among Egyptian and Arab social media activists through the hashtag “But the Messenger of God,” which became the most trending on Twitter in Egypt Oct. 25. This came after the statement of Al-Azhar Sheikh Ahmed el-Tayeb Oct. 24, in which he said, “We are currently in the midst of a systematic campaign aimed at including Islam in various political conflicts and discord. This began with the sinister attack on the Prophet of Mercy [Muhammad].”

He added, “We will not accept our religious symbols becoming victims of election campaigns in the political arena. I say to those who justify insulting the Prophet of Islam, the real issue lies in your hypocritical ideologies and petty agendas. I would also like to remind you that a leader's utmost responsibilities are to maintain civil peace as well as preserve social harmony, respect religions, avoid strife and not fuel conflict in the name of freedom of expression."

Al-Azhar announced Oct. 28 the launch of an online global platform to defend Islam and the Prophet Muhammad by highlighting his good manners, and that Al-Azhar Observatory for Combating Extremism will be in charge of managing this platform in many languages.

However, some of Al-Azhar's professors are opposing boycott calls, like Khaled al-Gendi, professor at Al-Azhar University who is known to be close to the Egyptian regime. In an episode of his TV show aired Nov. 3, Gendi said that the boycott calls didn't come with any results and that Macron will never apologize under the pressure of these calls.

Contrary to this point of view, Ihab el-Desouki, professor of economics at Sadat Academy, told Al-Monitor that the campaign to boycott French goods is successful and influential due to the high volume of French exports to Egypt and Arab countries.

He pointed out that the success of the boycott means reducing exports and consequently reducing the French growth rate and national income, which will negatively affect the state's tax revenues and unemployment rates.

Exports of France to Egypt are worth about $2.5 billion, 0.5% of total France's exports, according to 2019 statistics. Total exports of France to Arab countries in the same year amounted to about $32 billion, or about 5.8% of the total $555 billion French global exports.

Many Christian Egyptian activists joined the calls for boycotting French products through the hashtags “I am a Christian and against insulting the Islamic religion” and “We support our brothers [Muslims].”

Ahmad Gamal Noseir, an Egyptian programmer, released Oct. 30 a mobile app called "Made in Where," to facilitate detecting French products by scanning barcodes. The app has been trending on social media and reported on by many media outlets, as it is considered an effective tool enhancing boycott efforts.

But Alaa al-Sabea, member of the board of directors of the Egyptian Federation of Chambers of Commerce, told Al-Monitor that the boycott calls did not show any effect on French products in the Egyptian market.

"Trade relations between the two countries are strong and well established, and our experience with boycott campaigns proves that bilateral trade can never be affected unless there is a war between two countries, especially as 30% of Egypt's imports of cars are from France, and that French cars are preferred by many Egyptians after applying zero tariffs on it since the beginning of 2019", he added