Serious structural problems have hit Turkish foreign policy in the past two years, badly eroding its crisis-management and problem-solving capacities. 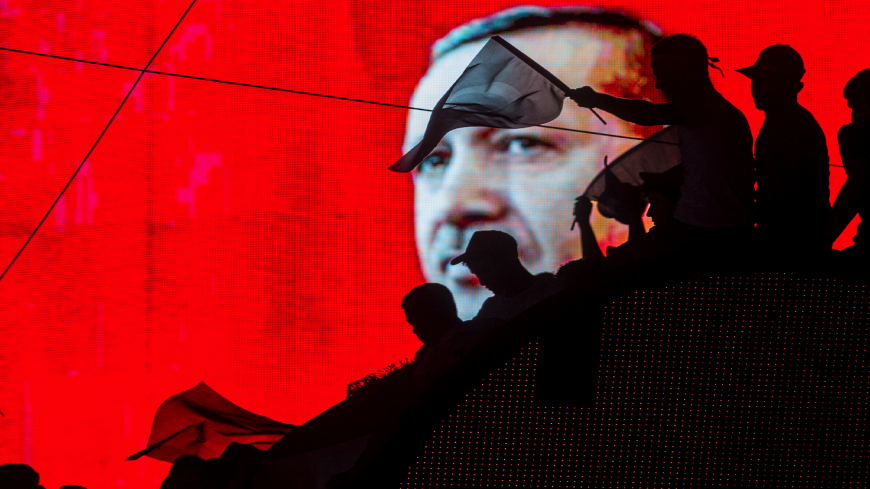 People wave Turkish flags in front of an electronic billboard displaying the face of President Recep Tayyip Erdogan at a rally on the streets of Kizilay Square in reaction to the failed military coup on July 17, 2016, in Ankara, Turkey. - Chris McGrath/Getty Images

As recently as early September, Turkish media was beating the war drums as tensions escalated with Greece over territorial and gas exploration rows in the Eastern Mediterranean. The pro-government media, in particular, was abuzz with commentaries on how Turkey’s military power was superior to that of Greece and how Turkey would easily win a potential war with its neighbor. The same pro-government commentators and retired generals are now lauding the merits of diplomacy and dialogue while accusing those who fail to change tune of promoting tensions and war.

Such abrupt turns on key matters of national interest have become alarmingly frequent in Turkey since President Recep Tayyip Erdogan assumed super executive powers in 2018, showing that Ankara’s foreign policy has fallen into the trap of short-termism and become increasingly unpredictable.

Moreover, almost everyone in Ankara feels entitled to speak on foreign policy matters. The president’s spokesperson and communications chief as well as the ministers of Defense, Economy, Energy and even the Interior have come to readily pass a comment. Ranting against Turkey’s adversaries is today a highly popular thing in Ankara. Foreign policy bluster has seemingly become an easy way for members of the ruling Justice and Development Party (AKP) to raise their profiles and advance their political careers. It is usually riskless and with high populist returns.

Amid these frequent about-turns and the cacophony of messages, foreign policy in Ankara today is a realm of inconsistency and confusion.

In the past two years, Erdogan has claimed credit for any bold foreign policy move, including Turkey’s military operation in northeast Syria in October 2019, its maritime deal with Libya the following month, and efforts to assert itself in Africa and the Eastern Mediterranean. But when it comes to less illustrious events such as Washington’s retaliation for Ankara’s purchase of Russian air defense systems, President Donald Trump’s brash letter to Erdogan over Syria, the killing of 36 Turkish soldiers in a strike in Idlib or Greece’s militarization of Aegean islands near Turkey’s shores, no one is around to be accountable to the public.

In short, foreign affairs have become a tool to furbish Erdogan’s image, the result of which is a highly personalized foreign policy.

On Sept. 17, for instance, presidential spokesperson Ibrahim Kalin framed Ankara’s decision to pull a research ship out of disputed waters in the Mediterranean Sea as Erdogan’s personal gesture to Greece. “Our president has given a chance to diplomacy again. Hopefully, the Greek side will use this as an opportunity to advance the talks,” he said.

A grave repercussion of Erdogan’s foreign policy posture, which has come to mirror his short-tempered and polarizing style in domestic politics, is the erosion of institutional decision-making and execution on foreign policy matters. The Foreign Ministry’s institutional capacity has been seriously damaged and overly politicized, including through nepotistic appointments and promotions.

Since 2018, the gap between Ankara’s dreams or desires and the reality on the ground or the realpolitik has widened as well. Ankara has come to pursue dreams of “spoiling games” by others rather than a foreign policy based on its economic and military capacity. The defensive, status quoist leaning of Turkey’s foreign policy in the past was hardly the best example, but its current offensive, revisionist brand is devoid both of a grand strategy and a capacity matching ambitions, which makes it extremely risky. Because of its failure to develop a realistic, rational and strategic framework, Turkey has grown increasingly isolated, trying to compensate for its risky loneliness with revisionist military activism.

Until the 2010s, Ankara used only limited military force to manage a complex, multi-threat environment. Its main priority was the four-decade domestic conflict with the outlawed Kurdistan Workers Party (PKK). Diplomacy and deterrence were used to freeze rivalry in the Eastern Mediterranean and in the Cyprus conflict. This began to change in the summer of 2018 when Erdogan assumed sweeping powers under a new executive presidency system.

Turkey’s embrace of muscular methods is rooted in profound transformations in its external environment and domestic dynamics.

Externally, Ankara’s threat perceptions have shifted east and south, owing to growing security risks in the Eastern Mediterranean, Iraq, North Africa and Syria, and to strategic competition with Egypt, Russia, Saudi Arabia, the United Arab Emirates and other regional powers. Ankara was particularly unnerved by NATO’s passivity on its southern flank during the Syria crisis, which contributed to a security vacuum there. In relying on the People’s Protection Units — the PKK’s Syrian franchise — to counter the Islamic State, Western powers ignored or dismissed Turkey’s well-known concerns. Also, there is a pervasive and enduring sense among the Turkish ruling elite that the Western security block failed to adequately support Ankara during and after the coup attempt of July 2016.

Second, military deployment abroad is popular with the armed forces themselves. It boosts morale and motivation through extra pay and promotion opportunities and provides valuable experience in joint force operations.

A third domestic driver of Turkey’s more militaristic approach is its role in harmonizing ties between the military and civilian leadership, who agree on the need to enhance Turkey’s military capabilities and defense industry. The military is more concerned with the technical dimensions of this consensus as part of a transformation and restructuring process called Vision 2033. Politicians, meanwhile, are keen to use this new capacity and energy in domestic and foreign policy. They also hope that keeping the army busy abroad will make civilian control of the military easier as the generals focus on external rather than domestic affairs. Finally, the boom in the Turkish defense industry allows Ankara to pursue a more independent strategy and display its defense systems for the purpose of international marketing.

The fundamental problems of Turkish foreign policy today could be summarized as follows:

What will the mood in Turkey be next week on the rows in the Eastern Mediterranean? Will it remain in favor of dialogue or reverse to warmongering? Such questions are becoming increasingly hard to answer as seven days is now too long a period in Turkish foreign policy.