Turkey more diplomatically isolated than ever in Arab world

Many analysts believe that Ankara’s meddling in the Arab world’s affairs has contributed to pushing some of these regimes toward Israel. 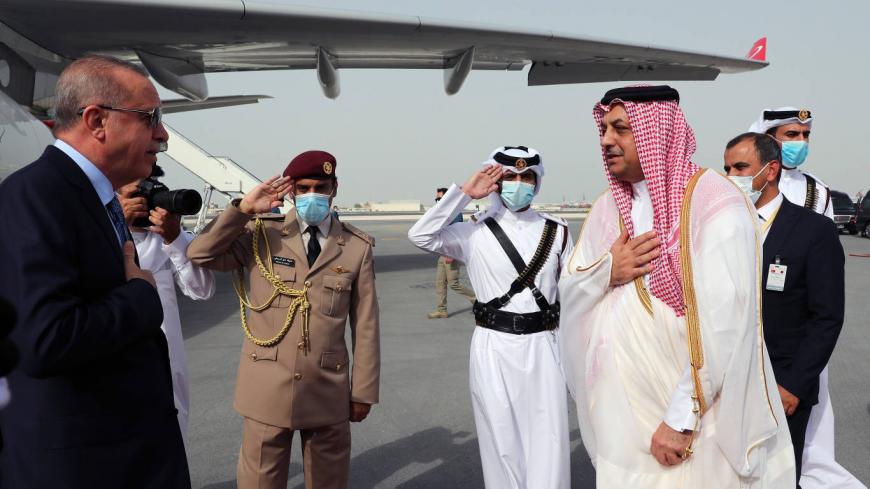 Turkish President Recep Tayyip Erdogan (L) is welcomed by Khalid bin Mohammad al-Attiyah (R), the Qatari deputy prime minister and minister of state for defense affairs, at the aiport in Doha, Qatar. How much more isolated would Turkey become in its relations with Arab states if Qatar returned to the good graces of the other Gulf nations? - MURAT CETINMUHURDAR/TURKISH PRESIDENTIAL PRESS SERVICE/AFP via Getty Images

The days when Erdogan and members of his Justice and Development Party (AKP) assumed their Islamist identity would automatically bring Turkey and Arab regimes closer are long gone.

Erdogan’s blistering criticism of Israel, after he came to power nearly two decades ago, initially gained him many kudos among Arab leaders and was greatly hailed in the Arab street.

His policies aimed at the region following the Arab Spring, which were mostly predicated on support for the Muslim Brotherhood and its offshoots, washed all that away overnight as far as many Arab regimes were concerned.

Barring the exception of Qatar, which clearly has pragmatic reasons for cozying up to Turkey, Erdogan today has hardly any friends left among Arab leaders.

Meanwhile, the number of Turkey’s Arab enemies and rivals has increased two fold when compared with the situation prior to 2002, when the AKP first came to power.

The recent decisions by the United Arab Emirates and Bahrain to establish diplomatic ties with Israel are only the latest setbacks for Ankara in a region where it once aimed to play a leading role.

Ankara is on guard now against losing more political ground in the region given the possibility that other Arab countries may opt to join the UAE and Bahrain.

Ankara reacted angrily in August to the UAE’s decision to establish diplomatic ties with Israel, accusing the Gulf State of “betraying the Palestinian cause for its narrow interests.”

“The history and the conscience of the people in the region will never forget or forgive this hypocritical act,” the Foreign Ministry said in a statement.

The UAE, however, was merely doing what Turkey did as far back as 1949 when it recognized the state of Israel and established diplomatic ties with it.

Turkey and Israel continue to have ambassadorial-level ties today despite their frosty and often hostile relationship.

Curiously, Ankara had no official comment on the high-profile four-nation signing ceremony in Washington this week overseen by President Donald Trump.

Iran is the main concern of the region's Sunni regimes today, especially among Gulf States headed by Saudi Arabia.

Nevertheless, many analysts believe Ankara’s meddling in the Arab world’s affairs and its strong support for the Muslim Brotherhood have also contributed to pushing some of these regimes toward Israel.

Turkey’s visceral fear of outside political interference has not prevented it from trying to interfere in the internal affairs of Egypt, Syria, and Libya with a view to bringing governments friendly to Turkey to power in those countries.

Turkish officials rationalize such meddling by arguing that the established anti-democratic and repressive order in the region does not represent the will of the people. The officials say that what Turkey is doing is therefore morally justified.

Many Erdogan supporters in Turkey also believe that if he were to run for leadership in a democratic election in any predominantly Sunni country in the Middle East he would be elected by a great margin.

While there might be some merit to this argument, it still amounts to wishful thinking. Given the manner in which power is distributed in the Arab world today, the current situation is unlikely to change anytime soon.

The only way this situation might change is if the regimes in the region were to be toppled.

These regimes, however, are wiser since the all-but-forgotten Arab Spring, and more prepared than ever with repressive measures to prevent a recurrence of those events.

Meanwhile, any support Erdogan may have on the Arab street has not translated into geostrategic advantages for Ankara.

The fact that the Arab Spring pushed Islamists to the forefront of regional politics also ensured that many non-Arab powers — including the United States, Russia, and China — generally favor the status quo to varying degrees.

Turkey remains the only noteworthy regional power that continues to provide strong backing and shelter to the Muslim Brotherhood and its offshoots.

Erdogan’s hosting of senior Hamas members in Istanbul on Aug. 22 elicited an angry response from Washington, which considers the Islamist Palestinian group to be a terrorist organization.

Ankara responded by underlining that Hamas was democratically elected, and tried to turn the tables on Washington by accusing it of supporting groups Turkey considers to be terrorist organizations.

It is not hard to imagine that many of the current regimes in the Middle East believe Ankara will always try and use any opportunity that presents itself to bring about regime change in the region in order to suit its interests.

Commenting on the signing ceremony in Washington this week, senior Al Jazeera political analyst Marwan Bishara wrote, “If anything, this is more of an alliance than an agreement — an alliance directed at the regional powers, Iran and Turkey.”

The growing aversion to Turkey has also pushed Egypt and the UAE into joining the anti-Turkish international coalition that has emerged in the eastern Mediterranean, where Ankara and Athens are in conflict over energy exploration rights.

Ankara and Cairo have been at odds since Egypt’s first democratically elected president, the Islamist Mohammed Morsi, and his Muslim Brotherhood-backed government was toppled in July 2013 by the military then headed by current President Abdel Fattah al-Sisi.

Retired Brig. Gen. Naim Baburoglu believes Turkey should prepare itself for the eventuality that other Arab countries follow the lead of the UAE and Bahrain.

Many analysts believe the UAE and Bahrain could not have taken the steps they did without the blessing of Saudi Arabia, the region’s power broker.

Baburoglu, underlining the close military ties Qatar has with the United States, said he believes this Gulf State — which is the only friend Turkey has in the region currently — could be pressurized by Washington into also normalizing ties with Israel.

Arguing in a recent interview with Veryansin TV that Washington was working hard to end Doha’s differences with the other Gulf States, Baburoglu expressed his belief that this will be achieved soon.

“Ties between Turkey and Qatar will not be the same as before if Qatar’s relations with the Gulf States are normalized,” Baburoglu said

“Let’s not forget that a precondition that Gulf States have for normalizing these ties is the closing of the Turkish military base in Qatar,” he added.

Other analysts recall that Qatar already has contacts with Israel and point to the recent cease-fire it negotiated between the Jewish state and Hamas.

Ahmet Tasgetiren, a devout Muslim political commentator who once supported Erdogan but now opposes him, points out that “Islamism” is a valid ideological approach.

Nevertheless he questions whether Turkey, as a state, should have adopted this approach as the foundation of its foreign policy.

“Islamism on the level of ideas can always exist. … However, the language of foreign policy has to be much more flexible. It is important to be able to meet and talk with everyone,” Tasgetiren wrote in his column in the daily Karar.

“Surely it is not a healthy sign for an Islamic country to become distant from Islamic countries that are gradually developing ties with Israel,” Tasgetiren added.

Editor's note: Sep. 20, 2020. A previous version of this article incorrectly stated that Turkey had no official comment on Bahrain’s decision to establish diplomatic ties with Israel. The article has been updated accordingly.