Austria will prosecute an individual who reportedly confessed to spying on behalf of Turkey. 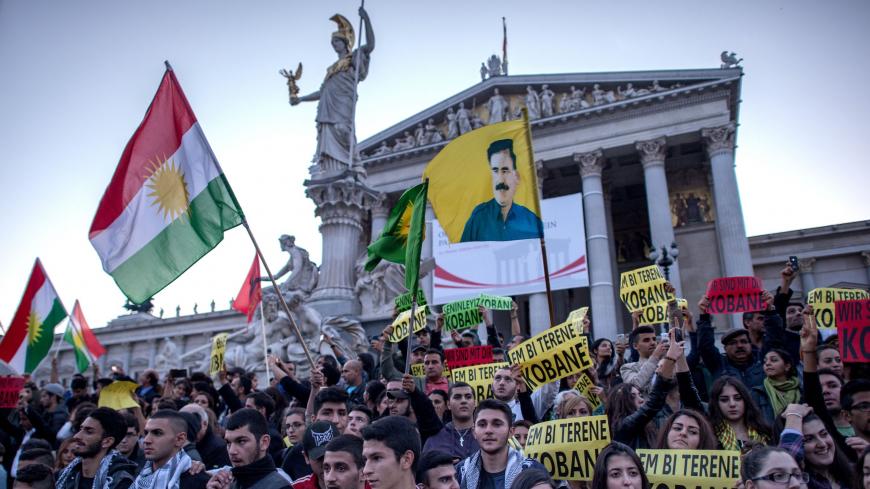 Pro-Kurdish demonstrators march in front of the Austrian Parliament building during a protest in Vienna on Oct. 10, 2014, to show solidarity for Syrian Kurds who are fighting to defend the Syrian-Turkey border town of Kobani from Islamic State militants. - JOE KLAMAR/AFP via Getty Images

Austria has caught a person spying for Turkey on its soil, the interior minister said today, in a revelation that threatens to further strain relations between Ankara and Vienna.

During a televised news conference, Austrian Interior Minister Karl Nehammer said that an individual had been “recruited by the Turkish secret service to spy on other Turkish citizens or Austrian citizens with a Turkish migration background to then report them to the Turkish security authorities.”

“We have a clear message to the Turkish Republic: Turkish espionage and Turkish interference with civil liberties have no place in Austria,” Nehammer said, adding that he had informed EU Council President Horst Seehofer about the investigation.

"We will also work at the European level to ensure that Turkey does not interfere in the internal affairs of the EU states," Nehammer said in a statement.

No further information was given about the alleged spy, who was discovered during Austria’s investigation into clashes that broke out between Turkish and Kurdish protesters in Vienna in late June. According to the Interior Ministry, investigators were probing whether the Turkish secret service had a hand in the riots.

At the time, Austrian police said that extremist groups had confronted a peaceful Kurdish demonstration protesting Turkey’s attacks on Kurdish separatists in northern Iraq. Police issued fines to some of the Turkish counter-protesters who were allegedly using a banned hand gesture associated with an ultranationalist group in Turkey called the Grey Wolves.

But Turkey said the protesters themselves were the extremists and accused them of links to the outlawed Kurdistan Workers Party (PKK), which has waged a decades-long violent insurgency on Turkish soil. The PKK is designated as a terrorist organization by Turkey, the European Union and the United States.

Both Ankara and Vienna summoned each other’s envoys following the clashes.

Some 300,000 people of Turkish origin live in Austria. Relations between the two countries have soured since the attempted coup in July 2016 and President Recep Tayyip Erdogan’s subsequent crackdown on dissent.

"Erdogan's long arm reaches as far as Vienna," Raab said. “We will fight all these influences that try to drive a wedge into Austrian society and the Turkish community in Austria."

There was no immediate comment from the Turkish Foreign Ministry on Tuesday.