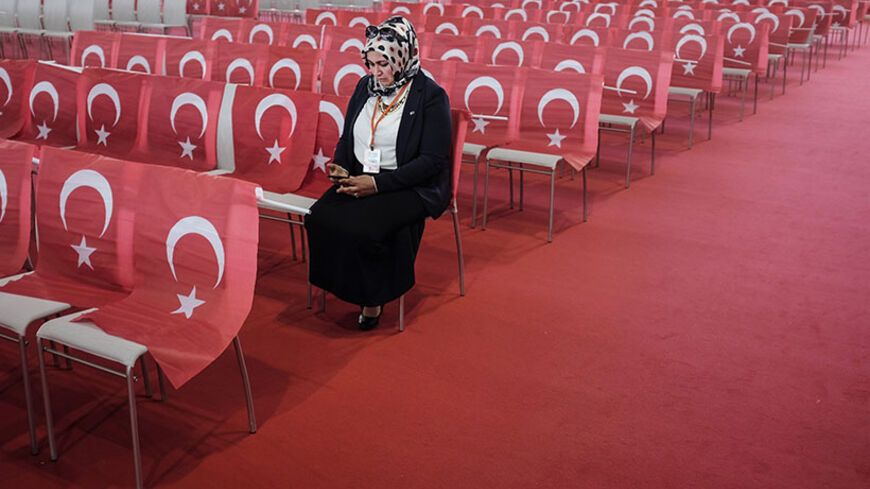 A woman checks her mobile device as she awaits the speech of Turkish Prime Minister Recep Tayyip Erdogan at the Albert Schultz Hall in Vienna, June 19, 2014. - Patrick Domingo/AFP/Getty Images

Prime Minister Recep Tayyip Erdogan, who has earned himself an international reputation for his harsh and divisive manners, has caused tensions in Ankara’s ties with Vienna this time.

The reason was his visit to Austria, aimed at gathering support among the estimated 250,000 Turks living in that country, as his party’s candidate for the Turkish presidential elections to be held in August. Erdogan has still not announced his intention to run, although it is assumed within his Justice and Development Party (AKP) and outside it that he will.

Erdogan irked the German government at the end of May over a similar visit to Cologne, despite calls by the German media and German politicians for him to stay away, citing his anti-democratic and divisive ways.

Steffen Seibert, spokesman for the government of Angela Merkel, warned Erdogan prior to his visit, “to show a sense of responsibility and sensitivity at this appearance [in Cologne].”

An estimated 45,000 mostly Alevi Turks, many of whom are also eligible to vote in Turkey’s presidential elections, protested Erdogan while he addressed 15,000 of his supporters in Cologne's Lanxess Arena on May 24.

Austrian Foreign Minister Sebastian Kurz, who at 28 is Europe’s youngest foreign minister, was less diplomatic than German government officials prior to Erdogan’s visit to Vienna on June 19.

“I expressly warn Premier Erdogan: He cannot drive a wedge into Austrian society. Integration is touchy and sometimes difficult. The wrong speech can set us back and poison the climate," Kurz told the daily Oesterreich. Kurz said Erdogan had a great responsibility to give the right message to the Turks living in Austria, like "learn German and be loyal to Austria."

He said that a speech like the one Erdogan delivered in Cologne would harm both the majority population and Turkish immigrants.

Kurz’s remarks — which Reuters said the Ministry of Foreign Affairs in Vienna confirmed as correct — appeared to carry an indirect reference to growing anti-immigration sentiments in Austria that have resulted in an increase in support for the right wing.

Heinz-Christian Strache, the leader of the far-right Freedom Party (FPO), warned Erdogan before his visit to stay at home rather than come to Vienna for “a pure propaganda campaign for his Erdoganistan.”

The ministry of foreign affairs in Ankara chose to remain silent on Strache’s and Kurz's remarks. The angry response to Kurz came from Deputy Prime Minister Emrullah Isler. “If [Kurz’s] statement is the way it is in the media, and there is no denial yet, then I think first that it is rude and not very much in keeping with diplomatic rules,” Isler told reporters on June 13. “Our prime minister is a statesman that the world knows. He has been prime minister for 12 years. He decides where he will speak. No one has the right or authority to decide what he will say.”

Meanwhile, a group calling itself Akincilar, a reference to Ottoman raiders led by Sultan Suleiman the Magnificent in the first Ottoman siege of Vienna in 1529, hacked the Austrian Foreign Ministry’s website on June 16.

“Who do you think you are kidding! You cannot decide how to talk to our prime minister! Erdogan the prime minister is the grandson of ancestors who reached Vienna, the soil you're walking on now! We are Akincilar. We are Ottomans. We are Turkey!” they wrote in Turkish, English and German, under a photograph of Erdogan next to a picture of Suleiman the Magnificent.

It is not clear if the hackers were from Turkey or if they were Turks in Austria, but such a provocation was unlikely to contribute to amity between Turks and Austrians. Turks there are already under pressure from the far-right FPO — which won a fifth of the vote in the recent European parliament elections — for failing to integrate into Austrian society.

Aware of the touchy political environment in Austria, Erdogan tried to moderate his remarks while addressing a crowd of 13,000 supporters gathered at a hockey stadium in Vienna on June 19.

Unable to hold back from reminding his audience that they are the grandchildren of Suleiman the Magnificent, Erdogan nevertheless added that he had come today to Vienna to win hearts. “No one should fear us or be concerned about us. We are a nation that has an established presence in Austria, Germany and all the other countries of Europe with its labor, experience and most importantly its message of peace and friendship,” Erdogan said.

He did not hold back from plucking Islamist chords, however, accusing Europe of sitting back and watching while the military in Egypt ousted the democratically elected government “and killed thousands of people,” while Syrian President Bashar al-Assad “killed 200,000 of his people like sheep.” Erdogan also accused Europe of sitting back idly as Iraq went up in flames.

“At a time when the whole world played the three monkeys, we called a coup a coup, a massacre a massacre and a despot a despot. At a time when Europe took its own values underfoot and remained silent, we came out courageously and defended what was right,” Erdogan said, appearing to take his demagoguery to new heights.

Pointing out that they were constantly cautioning European interlocutors against the rising tide of racism, discrimination and Islamophobia in Europe, Erdogan moved on to the touchy subject of integration of Turks in Austria.

“My brothers, this is what I say: No to assimilation, yes to integration! You have to learn German well, and you must carry your dealings with Austrian society to a very good point. But you must not get assimilated,” Erdogan said.

He ended by stating it was his government that provided Turks in Europe with the eligibility to vote in Turkish elections. He said the AKP would announce its candidate for president soon and added: “I believe that our brothers in Austria will give a strong support to our candidate.”

Nearly 6,000 demonstrators, comprising leftist Turks, Alevi Turks and Kurds — many of them eligible to vote in Turkey — as well as a handful of Armenians, gathered to protest Erdogan while he was speaking.

Erdogan’s attempt at using a conciliatory tone in his speech in Vienna, during which he also expressed gratitude to the Austrian government for its hospitality, failed in the end to assuage Kurz's concerns on the topic on integration of Turks.

Criticizing Erdogan’s comments on integration assimilation, Kurz later told reporters, “These show very clearly that the Turkish premier has brought the election campaign to our country and created unrest with this. We reject this.” He said that for them the idea of “respect for a host country looks clearly different."

Erdogan will most likely get the votes of conservative Turks in Austria. It is doubtful, however, that he has contributed much to peace between Austrians and Turks with this visit. He is also unlikely to have overcome the growing doubts about him in Europe. But he is hardly concerned about that, given his present focus on the presidency, fulfilling his domestic agenda.