Allegations that Turkish soldiers took two Kurdish farmers up in a helicopter and threw them out fit a broader pattern of operations against the Kurdistan Workers Party in rural areas. 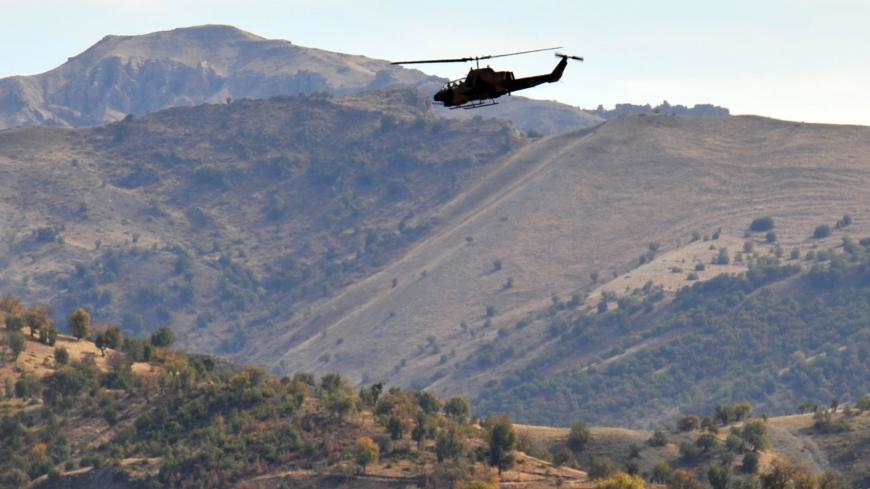 A photograph taken on Oct. 22, 2011, shows a Turkish military helicopter flying over a mountain in Yemisli, in Hakkari province, near the Iraqi border in southeastern Turkey. - MUSTAFA OZER/AFP via Getty Images

Turkish prosecutors have begun to investigate allegations that a pair of Kurdish farmers were brutally beaten and thrown out of a military helicopter in the southeastern province of Van on Sept. 11 in a case that has recalled the horrors inflicted on locals at the height of the outlawed Kurdistan Workers Party (PKK) insurgency in the 1990s.

Images of the bloodied faces of Osman Siban, 50, and Servet Turgut, 55, circulating online have provoked an uproar in the Kurdish community, with lawmakers from the pro-Kurdish Peoples’ Democratic Party (HDP) demanding that a parliamentary commission be set up to investigate the affair. Turgut is in critical condition in a hospital in Van. “My father is in a coma. He has brain trauma, 11 broken ribs, a punctured lung and doctors say his chances of survival are poor,” said Turgut’s only son, Huseyin in a telephone interview with Al-Monitor. “We demand justice but the state wants to bury the truth, to cover it up,” he said.

Siban, who was discharged from a military hospital this week, is suffering from dizzy spells and memory loss. “He is absolutely terrified. He’s lost his sense of time and place. When he speaks it’s childlike blubbering,” said Hamit Kocak, one of three lawyers who lodged charges of deliberate manslaughter, torture and dereliction of duties against the alleged perpetrators on behalf of the men’s families. Siban is recovering from his injuries in the coastal city of Mersin, where he spends his winters, and was not available for comment.

The government denies the allegations and is investigating the men separately for “aiding and abetting a terrorist organization.” The catchall label has been leveled against thousands of Kurdish politicians, activists, journalists and others who continue to be prosecuted and jailed, often on flimsy evidence since a two-and-a-half-year cease-fire between the PKK and the state collapsed in July 2015.

The incident in Van occurred following a military operation against PKK targets near Surik, a hamlet in the township of Catak, where both men eked out a living farming their land. Three Turkish soldiers and three PKK militants died in the clash.

Eyewitnesses in Surik said that same day, a military helicopter landed near their hamlet at 2 p.m. A group of soldiers emerged and ordered villagers to gather in the main square. They made them get down on their knees and show their identification. They singled out two of the villagers and started to beat them, shouting, “We are in pain, who are we to take it out on if not you? We are going to burn your village down.”

According to testimony relayed to Al-Monitor by Kocak, the soldiers came back in the late afternoon, dragging Turgut by the neck from the nearby field where he had been making bales of hay. They asked for Siban, who was in his home drinking tea. The pair were bundled into a helicopter and flown away. When villagers tried to follow, the soldiers pointed guns at them and threatened to kill them. Kocak believes the pair was likely singled out because local informants had snitched on them. “Let’s assume they are guilty — and they are not — these are poor farmers trying to make ends meet. Is this the treatment they deserve? Getting beaten to death?” fumed Servet’s brother Naif in a telephone interview with Al-Monitor.

The Van governor’s office asserted in a statement that Turgut was seen near the scene of the clashes “displaying suspicious activities” and had “fallen off a cliff” while trying to flee security forces. Siban was also spotted in the area. “Despite resisting capture,” he was detained “in keeping with regulations” and had been put on a military helicopter with Turgut and the corpse of a PKK fighter. They were flown to the Van gendarmerie’s provincial command. Siban and Turgut were then transferred to the state hospital in Van, where the latter is being treated. The statement did not clarify why Siban required hospitalization.

Kocak said that a delirious Siban recalls being “repeatedly beaten by 10 to 20 men.” “When asked if he was thrown out of a helicopter, he says he was, but then minutes later he says he wasn’t,” Kocak noted. With Turgut in a coma, it's impossible to corroborate either version.

A medical report dated Sept. 17 issued by the state-run hospital where the men were treated asserts, however, that Siban was admitted after “falling from a height.” The report, which was seen by Al-Monitor, goes on to say that the emergency medical technician who brought him in had indicated that Siban had “fallen from a helicopter.”

Mustafa Yeneroglu, a deputy for the newly created centrist DEVA Party led by former Economy Minister Ali Babacan, has filed a separate parliamentary motion asking Defense Minister Hulusi Akar to respond to the allegations. "The horrific claim that two of our citizens were tortured and thrown out of a helicopter must be investigated in an effective manner," he tweeted.

“Whether they were thrown out of a helicopter or not, it’s clear that these men were savagely assaulted during their detention and one of them may very well die because of it,” said Omer Faruk Gergerlioglu, an HDP lawmaker and member of the parliament’s human rights commission. “Yet, the message from the government is, ‘We will do whatever it takes to preserve the unity of the Turkish state, to combat terrorism. Nobody can stop us, we are above the law.’ The 1990s concept is back with a vengeance,” Gergerlioglu told Al-Monitor in a telephone interview. “The difference now, though,” he added, “is that since the [failed 2016] coup, state impunity extends to everyone, not only the Kurds.”

The 90s were a brutal time. Security forces torched and forcibly evacuated at least 2,500 villages as part of a scorched-earth campaign that displaced well over a million people, including the Turguts and the Sibans, who moved to Mersin when their village was razed in 1988.

Rogue elements carried out extrajudicial killings, kidnapped dissidents and subjected Kurds to numerous other abuses in a failed effort to quell the PKK’s 36-year insurgency. Throwing people out of helicopters was one of them, according to a 2005 report by Human Rights Watch.

Siban and Turgut’s ordeal has reopened old wounds for Newroz Xebat Yildirim, a Stocholm-based Kurdish psychologist. Yildirim described how in 1993, his cousin Mejdel dangled by a rope tied to his ankle from a military helicopter as soldiers grilled him over his supposed support for the guerrillas. Yildirim, who had been 14 at the time, was in their native village near the township of Nusaybin, where the nightmare unfolded. “Unsatisfied, they took his pregnant wife to the creek and stripped her naked and made her sit in it while they forced Mejdel to watch,” Yildirim told Al-Monitor, his voice breaking during a telephone interview. “Then they shot at his hand and pulled at it until it literally came off and could not be stitched back to his arm. The foot by which he was swung from the helicopter was so mangled you could see the bone.” Mejdel’s wife lost the baby. Yildirim says he is still waiting for the Turkish state to issue an apology.

During the early days of AKP rule, when the government embarked on radical reforms aimed at winning Turkey full membership in the European Union and Erdogan initiated direct peace talks with the PKK, an apology might have been within reach. But Erdogan’s alliance with right-wing ultra-nationalists struck in the aftermath of the coup “has reversed all of that,” said Ozturk Turkdogan, the president of Turkey’s Human Rights Association.

The veteran rights campaigner expressed deep skepticism over the outcome of the prosecutors’ inquiry into the alleged abuses against Siban and Turgut. Turkdogan told Al-Monitor that their story fits a broader pattern of anti-PKK operations in rural areas. “When the military loses their own in clashes, they typically go to the closest village, declare it a no-go security zone and abuse locals.” In normal circumstances, he explained, prosecutors go to the scene of the alleged abuse and file a report. “But in a no-go zone, it’s the security forces who took part in the operation who do the reporting," Turkdogan added. “More often than not the file gets shut down and even when not, justice is rarely served.”