The various Palestinian factions that took part in the unity meeting in Ramallah agreed to establish yet another body in the name of unified national leadership. 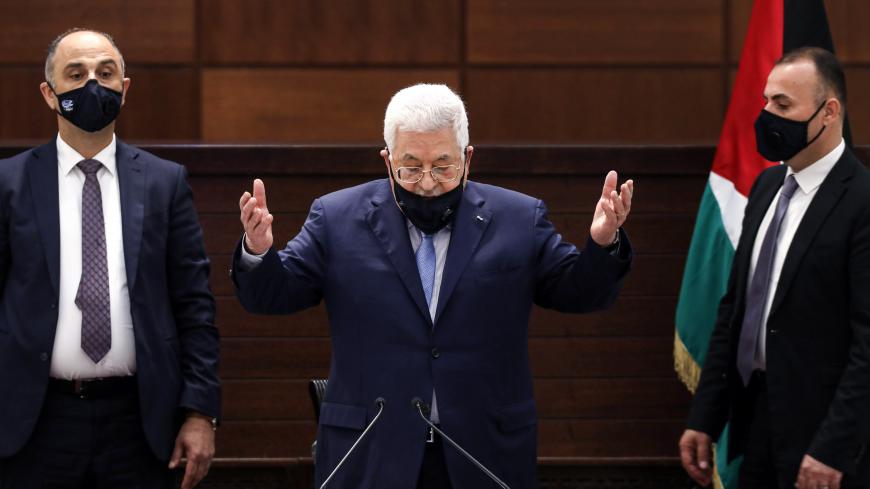 Palestinian President Mahmoud Abbas (C) recites a prayer as he arrives for a meeting in the West Bank's Ramallah on Sept. 3, 2020, with some representatives of Palestinian factions present and others attending via videoconference at the Palestinian embassy in Beirut. - ALAA BADARNEH/AFP via Getty Images

The unity meeting of Palestinian factions held at the Ramallah presidential headquarters on Sept. 3 produced yet another coordinating committee. Announced in a statement reminiscent of the leaflets of the first intifada, the new body has called for a day of rage on Sept. 13, black flags to be raised on Sept. 16 and insisted that the only the Palestinian flag is to be raised at all protest events.

The numbered leaflet followed the format and style of the communique of the Unified National Leadership of the Uprising, which was a secretive underground leadership that advocated support for the Palestine Liberation Organization (PLO) and called regularly for different nonviolent acts of resistance.

Unlike the first leaflets, which were printed in secret and distributed clandestinely, this statement was read out aloud on Palestine TV and there was little doubt that those behind it are the same leaders who met Sept. 3 in the unity meeting protesting the betrayal by some Gulf countries to the Palestinian cause. At the meeting, the participants committed to produce a strategic resistance plan. The Bahraini decision to join the UAE in a public meeting at the White House has added to the sense of urgency.

The new statement begins with a line from popular Tunisian poet Abu Al Qassim al-Shabbi: “If one day the people will to live, then fate must obey.” The name of the new leadership body betrays a clear concession by Islamists, who normally insist that any activities they conduct with PLO nationalists must be described as both national and Islamic.

While Palestinians are likely to follow the directives of this new body, initial reactions have been skeptical. When Jamal Zakout posted on Facebook about his own experience as a member of the first intifada’s leadership, pointing out the differences between then and now. At time of writing, more than 30 commenters had agreed that the current leadership lacks the credibility of the leadership behind the first intifada.

The people need to see unity in action, not in words. The absence of general elections are among the main complaints of many who feel that the current leadership of both the PLO and the Islamist movements has failed and needs to either step aside or win validation from the people through the ballot box. President Mahmoud Abbas and a number of PLO leaders have called for elections on numerous occasions, including in the recent unity meeting, but have never set an election date. The current atmosphere of unity has been forced on all Palestinians by the normalization agreements and must be legitimized via the ballot box, especially in Gaza, where a government exists in parallel to the universally recognized Ramallah leadership.

In addition to elections, many see a serious protest movement as unlikely to take hold while Palestinian government officials live comfortable lives and enjoy the trappings of a state despite having none of the rights and powers of a sovereign state. Although the idea of leaving the tasks of running Palestine to Israel has often been suggested, this idea has generally been rejected and there is a feeling that the public does want to retain the Palestinian government structures while improving their efficiency through providing a more accountable democratic and independent judicial system.

Some have argued that Abbas should reverse the decision to suspend the Palestinian Legislative Council until new elections take place. Others want the Palestinian police and other security institutions to commit to guaranteeing the freedom of expression, as stipulated in the Palestinian Basic Law. There will not be widespread buy-in from the Palestinian public unless free expression is protected. Furthermore, total transparency and a serious anti-corruption policy is crucial for the current governmental structures to survive in this new phase. No one is willing to sacrifice physically or financially for the sake of those who benefit from the status quo, many argue.

Although Palestinians have often paid lip service to the need for self-reliance in their struggle against the Israeli occupation, Abbas' diplomatic strategy has always depended on the support of the the international community and the Arab and Islamic worlds. Now that the Arab consensus has been broken, a return to Palestinian self-reliance has become the focus of the new strategy and the key to a popular nonviolent resistance.