US gives Iraqi Kurdistan peshmerga $250 million worth of Humvees, ammo

Washington's ambassador announced the move as some US troops prepare to leave Iraq. 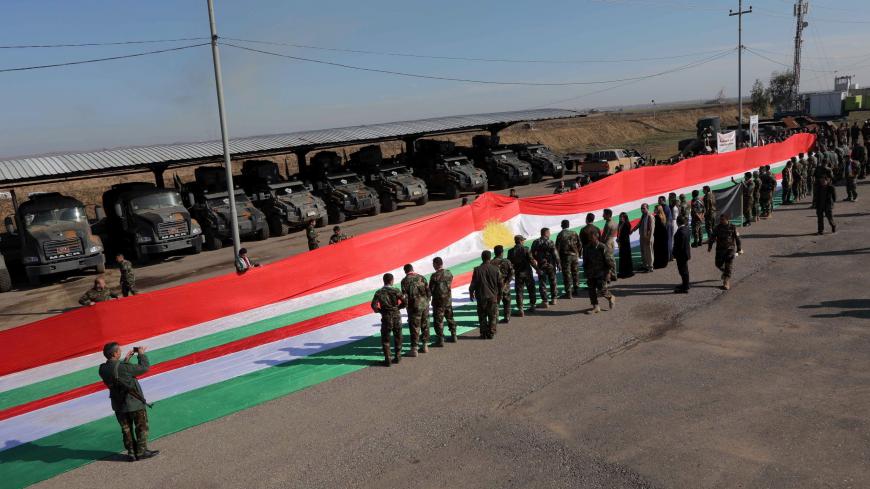 Members of the Iraqi Kurdish peshmerga forces hold up a giant Kurdish flag as they commemorate Kurdish Flag Day in Makhmur, about 280 kilometers (175 miles) north of the capital, Baghdad, on Dec. 17, 2019, in Iraq's autonomous Kurdistan region. - SAFIN HAMED/AFP via Getty Images

The shipment included more than 100 radios and vehicles — including Humvees — as well as uniforms and ammunition, according to statements by the Peshmerga Ministry and Washington’s ambassador to Iraq, Matthew Tueller.

Tueller and Peshmerga Minister Shorsh Ismail announced the aid provision at a press conference in Erbil.

“This is a tangible symbol of our commitment to the people of Iraq and to the Iraqi Kurdistan Region,” Tueller said, according to Rudaw news.

“Just as important as the equipment is the training that comes with it and it was wonderful to observe the soldiers in action before the official handover,” he said.

Forces of the US-led multinational coalition to defeat the Islamic State (IS) have continued to train both Kurdistan Democratic Party and Patriotic Union of Kurdistan peshmerga forces in northern Iraq’s Kurdistan region since the coalition intervened in Iraq in 2014.

The United State is paying more than $15 million per month toward peshmerga salaries, despite recent progress in Baghdad’s relations with the KRG.

Peshmerga units are considered essential in keeping the lid on extremist groups such as IS, but continue to suffer from political factionalism and nepotism, coalition military officers told Al-Monitor at a training facility in Sulaimaniyah last year.

The coalition has urged the peshmerga and Baghdad’s security forces to coordinate more closely and patrol the disputed territories between federally controlled Iraq and the Kurdistan region. The US-led coalition says IS remnants often take refuge in the territories. During last month's strategic dialogue with Iraqi leaders, Washington officials said progress has been made on joint security cooperation.

IS lost its last pocket of territory in a battle at Baghouz in Syria, near the Iraqi border, in March 2019.

The Trump administration is reducing its presence in Iraq by roughly a third this month, to 3,000 personnel, the head of US Central Command Gen. Kenneth “Frank” McKenzie, said last week.

Earlier this year, the coalition departed several smaller Iraqi military bases around the country to consolidate at larger facilities such as Union III in Baghdad’s Green Zone and Erbil air base.

US Army Maj. Gen. Paul Calvert assumed command of the coalition last week as it continues to shift to focus on advising and mentoring Iraqi military commanders.